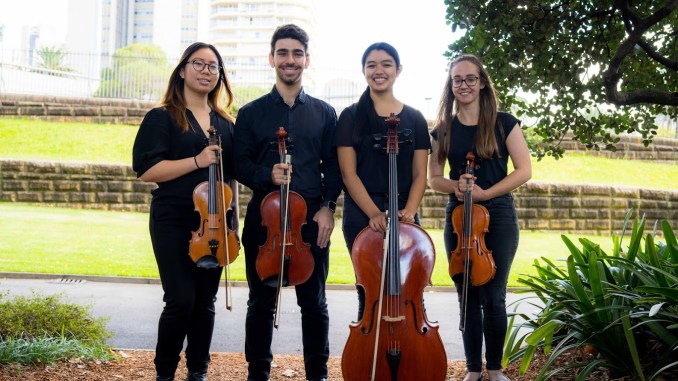 In collaboration with the Sydney Conservatorium of Music, the Women’s Club has been hosting a series of recitals celebrating the works of women who compose and perform.

In this interview, these four musicians tell CutCommon why they value music education in Australia, and what it means to them to be performing in a series of events that exists to showcase diversity.

One of the greatest values that music education offers is connection through music. Particularly with our diverse multicultural people in Australia, it’s important to connect our identities — and teaching music is such a great way to do that. Students can really shine in music that is different to other subjects, and it’s brilliant to facilitate that as a string quartet.

Diversity and representation are so important in programming, because it helps the audience feel seen and heard. If we can connect to as many people out there as possible, including women and First Nations people, then we know we’ve done our job properly as musicians and music educators. This requires deliberate programming, which is exactly what this Women In Music series has encouraged us to do. It has made us examine our own strengths and weaknesses in our programming, and spurred us to seek out works written by women.

I would like to see more deliberate and thoughtful programming beyond mandated guidelines. Yes, past European composers have great value in our repertoire, but musicians and organisations need to seek beyond the usual canon of works to challenge their status quo of repertoire. I would particularly like to see more diversity of programming in youth ensemble organisations.

The four of us met while completing our Bachelor of Music (Music Education) degrees at the Sydney Conservatorium, and Quart-Ed became our space to take all the training we were receiving – both as performers and as teachers – and use it to create the programs we present today.

As a student, my favourite musical experiences happened in group settings. I felt powerfully that if people applied what they learnt in group music-making to the big problems of the world, we might remember to listen to others, support other people, and respect and enjoy each person’s contributions.

More recently, I’ve been thinking about music’s ability to be an ambassador for a culture and a moment in time. There is so much capacity to use music education as a tool for developing respect for others.

The power of music education can be a powerful tool or a dangerous weapon. We have the power to encourage participation in a cultural self-expressive activity, which helps to foster feelings of community and self-worth. But thoughtlessly used, music education can tell people the opposite. I’ve lost track of the number of adults who’ve told me, upon finding out that I’m a musician, that they “aren’t musical”. Someone told them that, directly or indirectly – and it’s caused them to exclude themselves from an activity from which no one should be excluded.

One of our guiding principles as music teachers [according to Board of Studies NSW] is to teach using “a range of music that reflects the diversity of Australian culture”. String quartet repertoire in particular is one genre that can feel hopelessly stuck in dead-European-male-from-the-1800s land. This concert is really an opportunity to flip the script on that narrative, and show other people what today’s string quartets play!

Giving permission to sing, or play an instrument, opens up a lifelong branch of cultural exploration. Meeting people from other cultures, learning their music, and then singing and playing with them breaks down cultural barriers.

Throughout my education, I yearned for opportunities to express myself. No other subject allowed for as much abstract expression as music. Starting students on the opportunity to forge a lifelong passion for expression is one of the most compelling values for music education. Through an active pursuit of entertainment, music education builds relationships, and strength of character.

The world should mourn the countless wealth of music lost by failing to give equal opportunity to women in music. Women in Music has a critically important objective. This event celebrates the underrecognised genius of a full program of contemporary female composers. I am grateful for everything they do!

The world needs music, love, respect, and empowerment for all. It needs all these messages clearly and consistently expressed and embodied around the next generation.

Getting these messages into early education, and into the mindset of parents, can have a massive impact on people’s core beliefs.

It breaks my heart that so many incredibly skilled and dedicated women are underappreciated, or overlooked for performance opportunities simply because they aren’t “one of the boys”.  Women in Music is doing fantastic work towards all the right goals, and I look forward to supporting them in any capacity I can.

Music is an integral part of so many people’s lives — young people curate the soundtrack to their lives through their Spotify playlists, and they learn music by jamming with friends or in their bedrooms off YouTube. Being able to connect with young people through music, encourage them to express themselves, and share the unique experience of making music with others is an important part of fostering the development of commutation and collaboration.

Bookings have now closed for the Quart-Ed’s performance on 9 June. You can keep up to date with the group on Facebook. The next event will take place on 21 June for International Make Music Day featuring Liza Lim and friends, and the Sydney Conservatorium’s Composing Woman program. Visit the Women’s Club website to find out about the series.