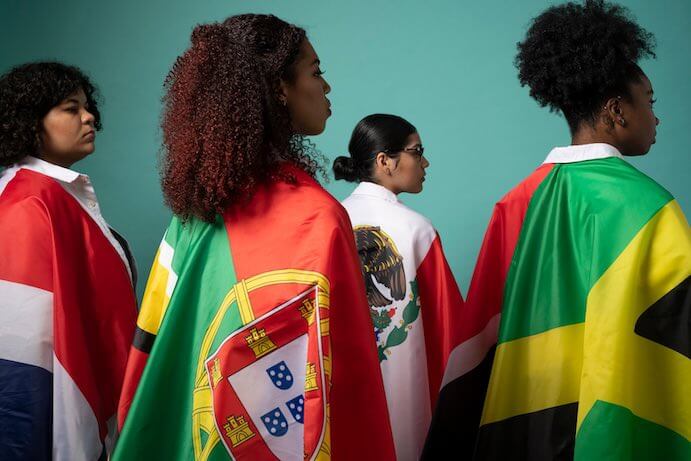 As a musician, it’s often easy to pinpoint the overall themes of an album through instrumentation, genre, and the era with which the music is affiliated. Rarely does a project transcend all of these things, but the debut album from percussion quartet Recap (Arlene Acevedo, Alexis Carter, Tiahna Sterling, and Aline Vasquez) defies the sonic categories that are typically assigned to music.

The central theme for Count to Five (innova Recordings) could be in the drums — not just any drum, but the bass drum and the pitched tenor drums that drive each track, either as the foundation underneath or the center of musical development. And yet, what ultimately drives this album by an all-women of color ensemble is ceremony. What is heard in the music undeniably contributes to a sense of togetherness, and specifically belonging, which is what ceremony requires.

Rather than a chord progression or driving rhythm stabilizing the music, there are clusters of pitches, drums, and ceremonial visuals. The underpinnings of these clusters are more than audible — they are physiological in an engagement of the body as a whole, as a part of something bigger than the individual musician or listener. It’s like standing directly in front of a huge speaker. In that place, the ear is the least responsive. It’s the body that takes in a visceral processing of the music, typically the bass, that the ear can no longer compute. On Count to Five, individual lines of drums, voice, strings, woodwinds, and synthesized sounds combine to create a unified texture in each track. These singularities resound already whole, manifesting themes of ceremony and community in different ways. Lyrically, Caroline Shaw’s “Will There Be Any Stars in My Crown” from By and By signifies (according to its biblical references) souls being saved or reached because of an individual’s outward focus on the well-being of others. Sonically, Allison Loggins-Hull’s Hammers dances the drums as they sit in the middle of the piece rather than underneath, kind of cocooned in what could be a rite of passage ceremony. The pitched tom-toms are also just as present in Lesley Flanigan’s Hedera — they cohere the music rather than just supporting it. Angélica Negrón’s Count to Five mimics sounds of touch. Knocking, shaking, flipping, splitting, and crunching sounds created by an array of percussion instruments make it impossible to isolate one’s self from the communality of the album.

And even in Ellen Reid’s Fear Release, the space marked by repeated, intermittent silences all center around five or six notes that create a circular repetition. It might be the most aimless of all the tracks, lending towards a flotation that is not grounded in the harmonic progressions that can be attributed to an array of genres, whether it be pop, gospel, R&B, rock, and even jazz. The climax unleashes all of the instrumentation, reminding the listener that, still, there is a coming together of the initially disconnected silence. As this track dissolves into a focused alignment of instrumentation with an incremental dissipation of sound (in the same way Hedera beautifully closes), there is no scatter. Instead, there is resolution. In Mary Kouyoumdjian’s Samar’s Song, voice, strings, and vibraphone move in tandem, sometimes in unison, and sometimes complementing each other, creating a binding, pentatonic style. This familiar, circular sound gives way to a clinching yet smooth bass drum reminiscent of Japanese taiko drumming. This semblance of taiko drumming is found all over the album, always reaching into the deepest, and thus involuntary, physiological sensation of the body. Whether these deep bass tones are an actual bass drum or tenor drums, bass marimba, or the ever-present low-pitched tremolo throughout the album, Recap ensures that the listener never forgets who they are — a percussion quartet.

What can easily be forgotten, because it is so rare and virtually impossible to come across, is that this percussion album is dominated by women, particularly women of color. The fact that Count to Five achieves a sense of communality both sonically and in the relationships between the artists is what makes this album more than just an expansive way to experience percussion. The diverse representation of performers and composers isn’t the result of a door being left slightly ajar, allowing a few people to squeeze through — this album evens the playing field, adding to the unending canon of predominantly male (and usually white) percussionists and composers. Seeing this album performed live would achieve the thematic communality heard in the music, the body, and ultimately, identity.