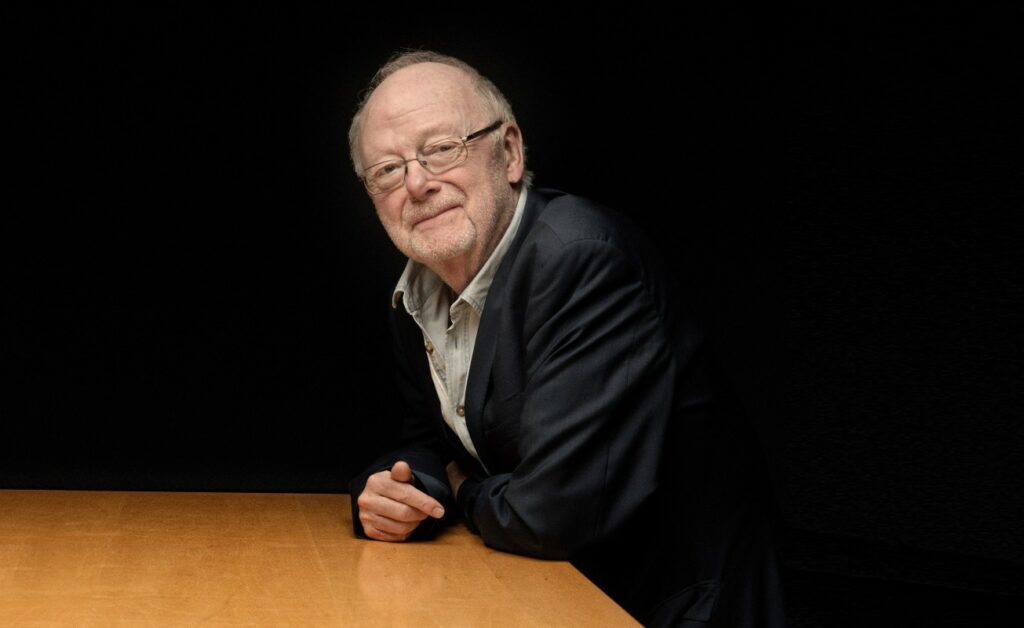 Louis Andriessen has died. He was a highly idiosyncratic composer of music that, like the man himself, inspires great love. Encountering his music as a young composer changed my life. Encountering him as a conductor and producer was one of the greatest joys of my life.

Louis was an incredibly gregarious, gentle, funny, wickedly funny, intelligent, well-read man. He treated everyone as a peer, regardless of age or career stage. Always curious and encouraging, he would ask young composers after their work, talk about his favorite American television shows (the “highly ironical” Desperate Housewives and South Park were among his favorites), who relished being in the company of people (a rarity among composers). During the 2014 Andriessen75 festival in Washington, DC , it was striking to see him become increasingly withdrawn as performer friends completed their stints and left him behind. His wife, the violinist Monica Germino, explained that he was a very social person and likes having people around him who loses something of himself when he has no one around for mischief. For Louis, balancing that part of his personality with the essentially lonely aspect of our profession meant regulating his schedule. He always kept a two hour window in the afternoons clear for his “naps”–periods of restful downtime devoted not just to relaxation but also to some comopsition, especially on the road.

As a composer, Louis is often grouped with the early generation of minimalist composers. His music, however, never focuses enough on process to really be considered minimalist (he preferred to think of that music as “repetitive music” anyway). The truth is that his musical interests were broad and rather catholic. He is said to have written the first 12-tone piece in Dutch music history, is a published scholar, with Elmer Schoenberger, of Stravinsky (The Apollonian Clockwork, an impressively bizarre book in which it’s impossible to tell what is true and what is embellishment, let alone one authorial voice from the other), and wrote densely maximalist music theater that, yes, incorporates repetitive aspects. He also loved Bach and counterpoint, and the juxtaposition, particularly in the chorale preludes, of two different tempi for dramatic effect. Most famously, and no doubt through his love of Stravinsky, his music is highly ironic. And yet, occasionally, rarely, when called for, as in the waltz setting of the Song of Songs in part four of La Commedia, he could be sincere to the point of sentimentality.

His influence is one of personal and political aesthetic as much as musical. “Who are you composing for: who’s going to play, where’s it going to be played and for whom,” he wrote in 1980. “If you ask yourself these questions and try to come up with some kind of answer then you’re already deeply immersed in the field of cultural politics.” (Everett, 2006) This meant embracing all art as political, an attitude that led him and other young composers to form the Notenkrakers collective, founding the ensemble De Volharding, and engaging in disruptive non-violent protest against the perceived problems of Dutch musical life in the 1960s and 1970s. This attitude permeates a great deal of Dutch and AMERICAN new music. It is impossible to think of groups like Bang on a Can, Alarm Will Sound and my own Great Noise Ensemble, among many others, without such an outlook.

Louis’ best pieces have a sense of maximalist importance beyond their often profound subject matter. State power, Marxism, Anarchism, Catholicism, the nature of time and even matter itself are all themes he explored. Each piece is also perfectly constructed with a musical logic that embraces tonal consonance and emancipated dissonance; minimalist repetition with maximalist architecture. His “monsters,” as he called his large works, are cathedrals of sound (in the case of Hadjewich, literally!). They are among the most important works of the late 20th and early 21st century. I hope that one of their most unique aspects, their instrumentation, does not severely limit their performance moving forward as they often have so far. At the same time, a performance of one of Andriessen’s monsters is always an event because of the challenge of mounting them. That specialness is part of the appeal, too.

They say to never meet your heroes or they will disappoint you. Louis Andriessen was the exception that proved that rule. He was gregarious, generous, mischevous, encouraging and supportive. In Amsterdam in 2011, we attended a concert together by the Steve Lehman Octet. The absolute virtuosity of those musicians and the metrical magic in their music was astounding, and Louis was like a giddy boy taking it in, wondering out loud how they did it. that joie de vivre was infectious, as was his encouragement of younger musicians. He sometimes seemed to lack ego (though he certainly had one. How could he not?). I still cannot believe that I was lucky enough not just to meet him, but to work with and befriend him!

A giant has fallen. Living in a world without Louis feels apocalyptic. Or, it would, if he himself didn’t seem to have an ironic relationship with death. “Death is when you don’t piss anymore, you don’t shit anymore, you don’t think anymore” sings the boys’ choir at the end of “Dancing on the Bones” in the Triology of the Last Day. It is a part of life as much as birth and everything in between. That attitude is also one of his great lessons. To paraphrase Gabriel Garcia Marquez, said: don’t cry because it ended; smile because it happened.