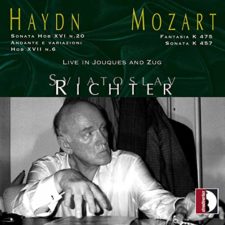 Austerity and lack of artifice similarly characterize Richter’s Mozart. Stradivarius previously issued Richter’s March 1990 performance of the K. 457 sonata from Jouques, where the outer movement’s runs and roulades seem marginally less effortful and more fluid than the present traversal. The Adagio finds Richter’s wonderful legato operating on cruise control, whereas his tone opens up and sings out more vibrantly in a live Philips recording of the same work dating from just a few weeks later. If this disc didn’t exist, you wouldn’t miss it, but at least the Haydn selections are worth hearing.