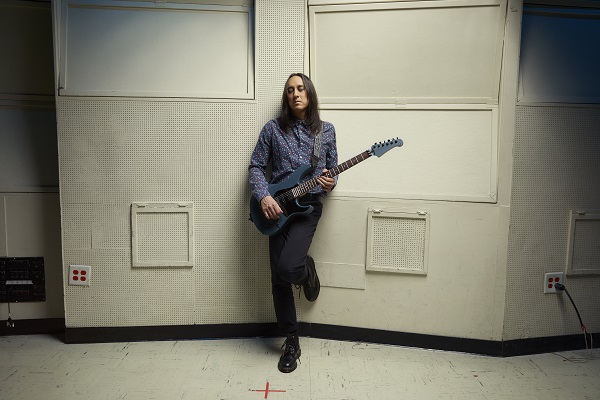 Smashing Pumpkins guitarist Jeff Schroeder has unleashed his debut solo single, and it’s a gem, featuring fuzzy, shoegaze-style guitars, slinky shredding and dreamy vocals. The track, titled “Haenim,” is actually a cover of a 1973 Korean folk song and originally released by teen guitarist, Kim Jung Mi. Schroeder took the tune in a completely novel direction and truly made it his own.

To record “Haenim,” Schroeder teamed up with bass guitar player Arion Salazar and drummer Shane Graham at The Cave Studio in Los Angeles. He also added some layers of guitar at his home studio. For vocals, he tapped Georgia’s Heeya So.

This isn’t the only solo music from Schroeder on the way. He’s also wrapping up work on a full EP of solo material, which he hopes to release by late this year or early 2022. Schroeder is also keeping busy with the Smashing Pumpkins, working on the band’s upcoming, 33-song opus. To keep up with Schreder, visit his official website at JeffKimSchroeder.com.

Schroeder spoke with Anne Erickson of Audio Ink Radio about what moved him to cover “Haenim”; how he identifies with the song, being of Korean ancestry; what it’s like working with Billy Corgan; and how being a member of the Smashing Pumpkins has shaped him, musically. Listen to the Jeff Schroeder interview below and hear it via the Audio Ink Radio show on Apple Podcasts here and Spotify here.

I really just liked the song, and I was always just a fan of that song and listened to it for years, just going, “Oh, my God. It’s just such a beautiful song.” It has an interesting feeling in that the lyrics are sung in Korean, but they are generally about going out into the countryside and getting a certain type of rejuvenation and healing. So, I thought that was an appropriate subject matter for the time we were coming out of.

On how he personally identifies with the song, because of his Korean heritage

There’s very something very interesting that seems to be going on amongst people of my generation and even younger, especially for Korean-Americans. I think our experience of Korean culture is much different than people living in Korea. I think people in Korea right now are on a new frontier of their own time and space within cultural expression. Obviously, the film industry there is booming. The electronics industry there is booming. There’s K-pop. It’s a very wonderful time for them.

So, I think the nostalgia for the past isn’t the same for people in the U.S., where we’re like, What is our relationship to this time and our parents and our parents’ culture and this history that kind of got us here? I think all those things really had a lot to do with why I’m so attached to that song, and thinking also, What is my relationship to my personal own Korean-ness? Because, being of mixed heritage, it’s even a little more complicated, because it’s always a question of, how much ownership could I take of that identity? And, of course, there are always, within culture and politics, gatekeepers and people who want to tell you, but when you make the move within the spiritual realm of things you realize, well, it’s up to me to decide what my relationship is going to be. And music and art and film have had such a big impact on me. It’s really a lot of how I experience and understand the culture, is through those kind of artistic expressions. So, it had a lot to do with that.

On the status of his upcoming solo music

I’m doing an EP that’s scheduled for release basically the end of the year or early 2022. But, we’re going to be releasing more songs. I think the next one is going to kind of come out the end of September. We’re going to want to work this for a month or two and then release another one.

On how being a member of The Smashing Pumpkins has influenced him, musically

It’s radical to a certain extent, because I get to play all the time with three legends in Billy (Corgan), James (Iha) and Jimmy Chamberlain. Even our bass player, Jack Bates, is the son of Peter Hook of New Order and Joy Division, and he brings that element into to the band, as well. So, there’s this rich musical legacy, and everybody is so creative and has such great ideas.

Billy is an amazing, amazing songwriter and producer and guitar player. So, for me, when I joined the band 14 years ago, I had, of course, recorded and put out records with bands, but not at this level. I was able to go into a situation and be like, “Wow. They worked with Butch Vig and Alan Moulder and Flood. And Flood and those guys worked with Brian Eno and U2 and Depeche Mode.” There was this whole rich legacy of really the best music. Getting to learn how to make real records in studios from people that are some of the best that have ever done it- I can’t express enough how much it changed me as a musician. Being able to play on stage every night with a drummer like Jimmy Chamberlain, who, if you can just barely keep up with the guy, you’re going to improve as a musician, because he’s leading the charge. He’s one of the most insane musicians I’ve ever had the chance to not only watch and see but be able to play with. It’s really cool.

It was actually quite easy. I would like to say, because it does come up every so often- of course, the natural thing to think is like, well, this guy’s coming back to take his job back. Did that feel threatening to you? But, there was complete transparency the whole time. So, from the second Billy was like, “Hey. James has kind of reached out, and we’re talking.” But, he’s like, “If he rejoins a band, you’re going to stay in the band.” So, it was never a threatening situation in that way. Then, on top of that, James has been incredible to me. I would say that over the years, I consider him a good friend in that we- of course, I’ve have had a long relationship with Billy and Jimmy, but even with James, we just talk on the phone about nothing related to the band and go get dinner and things like that. So, it’s been a really, really wonderful experience.

Strangely for me, on the musical level, which for me is one of the most important parts, it actually was a blessing that I didn’t even really realize in that, when I joined the band in 2007, my role was to kind of do what James did in the band with my take and my spin on it. So, there were a lot of duties and whatnot- playing styles and sonic things, like certain guitar tones and stuff, that really weren’t part of my vocabulary at the time. In one way, it was great, because I learned all these skills that I wasn’t really well versed in, and I got fairly well at doing that. But, now that he’s back and he’s doing what he would normally do, it’s actually created space for me to be myself. I get to actually add more of my personal voice to the band’s aesthetics, and that wouldn’t have happened, I don’t think as much, if James hadn’t come back. It’s really been nothing but positives in that.

We’re about halfway through working on another big album, which is basically, I guess, a sequel to “Mellon Collie (and the Infinite Sadness)” and “Machina,” so it’s the third in a trilogy of more of a concept-based album. This one is 33 songs. We’ve been working for a long- almost, basically, the whole year on it. But, we’re in the middle of real tracking and stuff right now. James and I are working out here in L.A., and drums are basically done, so Jimmy’s done his part. But, Billy is working in Chicago, and I’m out here in L.A., and James is in L.A., so we’re plowing through it. That’ll probably take most of the rest of the year, because it’s a big, sprawling thing.

But it’s been very challenging to work on a piece that big, because even for me as a guitar player, usually you’re always working on things and have a bunch of ideas to try on these new tracks. Then, after four songs, you’re like, okay, I have to come up with some other stuff. So, then you work hard and get through the first 11 songs, and you’re like, “Oh, wait a second. That’s only the first act. I’ve got two more acts to go!” (Laughs) So, you’ve really got to dig in deep. You’ve got to dig deep into your soul to find out what is in there. What’s this song calling for? How can I listen to this song differently than I listened to the last one? It really pushes you artistically. Some days it’s hard, and we fail. I fail. And, then you come back the next day and try again, and it’s rewarding when you go, “Wow, yesterday sucked, and today is actually quite good on the same song.” So it can be fun.

It’s transformed the way that I work, in that he is relentless for greatness. One thing that I always tell people is – because he has maybe a reputation for being difficult in a studio or something like that – but he absolutely doesn’t put any expectations on anybody else that he doesn’t put on himself, as far as quality, performance. He relentlessly from an artistic standpoint pursues his ideas, and that is the biggest and the best lesson to learn. That’s one, and the other one would be that he’s unabashedly unique. That’s another thing that I’ve learned, that there are different types of musicians. There are musicians that will go out and get hired by a band to be a backing band guitarist or drummer, and those are very valid and great ways to earn a living and make a living. But, there are also musicians of a different ilk that maybe bring a different sort of quality to the table, and that is being absolutely unique.

I feel legends like Billy are born out of that ilk where there is only one person that can be Billy Corgan, and that’s Billy Corgan. From the second he plays the guitar, from the second he sings, it’s only one person. And, that’s really inspiring. That takes a lot of courage, devotion and dedication to cultivate that type of uniqueness, because it’s scary. It’s vulnerable, whereas it’s easier to copy other people. Right? But to be completely unique and be yourself is the hardest thing to do. And, he’s been quite successful at it. So, that’s something that I definitely don’t not notice every day… Jimi Chamberlain is the same way, and James Iha is the same way, too, as far as they do all these things that are are completely idiosyncratic and unique to them. So, it creates a sound. For me, that’s been something that I have tried to – I would never be in a position to evaluate myself to see if I’m successful or not at it – but I think that in pursuit of greatness, those are the types of things that I’ve learned from being in a band with those with people: Billy, Jimmy and James.