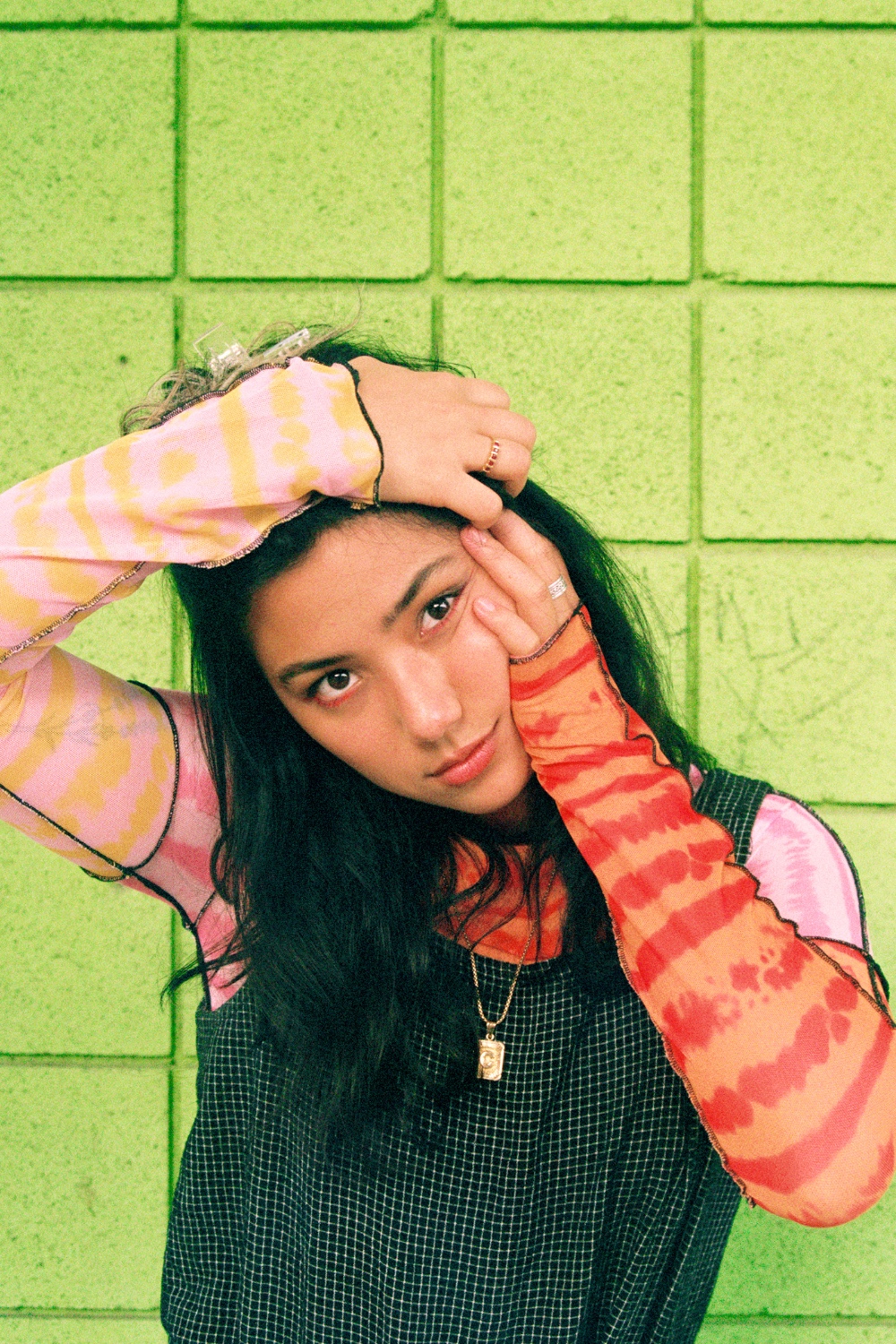 Spill tab was on tour with her close pal and collaborator Gus Dapperton in late 2019 when she started to notice that there were parallels between her favourite reality TV show and her own life. “I started to watch Love Island and realised that staying in a confined quarters with a lot of people is crazy!,” says the LA-based, French-Korean artist. She laughs at the memory: “Touring is an intense living situation where every drama is heightened and questionable decisions are made. It was on that bus where the Love Island complex was confirmed to me.”

As spill tab started to craft the songs that would make her as-yet-untitled second EP (due in October), she drew from the lessons that she learned on the road as both a former A&R intern and Dapperton’s merch manager. For spill tab, navigating the tension of working with others in such claustrophobic circumstances meant that, going forward, any challenges presented by the back and forth nature of collaboration wouldn’t add a burden on her creative process; instead, she has grown to embrace the chaos.

Taking the time afforded to her by the pandemic, last year, spill tab (virtually) reached out to a team of her favourite artists including Tommy Genesis and Jawny to help her put together her second extended release (the follow-up to 2020’s ‘Oatmilk’ EP), which melds an everything-goes approach to pop and alt-R&B with stories about entering young adulthood. Much like early singles ‘PISTOLWHIP’ and ‘Cotton Candy’, the EP wields a colourful, pitch-shifted landscape defined by a sense of adventure.

“I feel there’s always ups and downs when it comes to creating a body of work, and that represents the experiences you went through while making it,” she says. “I’ve always said that I love collaboration, no matter how difficult the process.”

Before these new tracks begin to enter the world over the coming months, NME caught up with the boundary-trancing singer-songwriter to talk about her globetrotting childhood, adapting to life as a young musician in LA, and why she thinks that virtual collabs are the way forward.

You grew up all around the world and have spent time in Paris, LA, Bangkok – how has that influenced you?

“When I started to implement French into my music, it was amazing because I got to show off that part of my identity – and I’ll be able to tour Europe in the future! It’s a really tough market to crack over there…”

What are the differences between writing lyrics in French and English? Do the two languages lend themselves to different sounds?

“There’s a way that things get conjugated in French as it’s a romantic language; there are more possibilities for wordplay and rhyming, which is really fun. I feel that a lot of French artists do a lot of repetition, alliteration and wordplay because it’s so much easier to do that in French prose.

“I also think that working with both languages is a way for me to continue to have French culture in my life. My grandma, aunt and cousin all speak French as it’s their first language. To be able to have a way to keep working in the language and that part of my culture and upbringing is really cool; it feels like a little exercise book that I open up every once in a while. But importantly, when I go back to France now, I don’t feel totally disconnected.”

Is there a part of your heritage that you feel closer to?

“I lived in Thailand for a little bit, and that was cool because as much as so many other cultures are part of me, I look Asian. It was cool and affirming to live in a country where I looked like the predominant population, but I didn’t speak Thai, so that was limiting – people just saw me as a foreigner at that point. But honestly, when I moved back to LA from New York last year, I realised that the creativity in the air just made me feel like I am at home in this city.”

“There are so many moments in my life that have enabled me to be able to do this. I was very lucky to grow up in a family that did appreciate music and the arts, and I was then able to go to college, and not everyone is able to do that.

“But I think being a musician in LA is incredible; I feel like people here come from all walks of life. It’s difficult for all of us to break through, and it takes a lot of fucking hard work, so we learn in different ways together. I now find myself in a sphere where everyone around me is doing music as their job, which wasn’t the case wherever I’ve lived before.

“A thing that happens in a lot of jobs in the creative industries is that there’s absolutely no cut off between your personal life and your work life. I find myself just talking to people, then suddenly social situations turn into work ones, and then they bleed into each other. In LA, carving out time for yourself as a musician is really important.”

Have you managed to find that balance between the personal and the professional?

“To be honest, I’m still struggling with it. It was really hard when I first signed a deal in January; I developed a sliver of guilt where I was like, ‘Why do I get to do music as my full-time job?’. I told myself that I had to work tenfold, to prove that I was worthy of it.

“But it is easy to burn out really quickly, and that’s what was happening. I was just thinking about music all the time until it became something that I didn’t like any more. I was like, ‘I’m starting to not enjoy this.’ I knew I had to change things in my life to fix that mentality, so I started to observe people that are successful and happy so that I could adapt to a new life. And I now feel like I find answers to your question every day, whether it is like taking time to myself or planning a vacation.”

How did your new Tommy Genesis collaboration ‘Indecisive’ come about?

“We’ve never met in person! When [producer] David [Marinelli] and I started making the song, we realised that we needed a fast rap section – and there was no way in hell that I was going to be doing that part. I’ve been a fan of Tommy for ages and I really wanted a woman of colour to be on the track – that was really important to me.

“Over Instagram DMs, we formed the basic outline of what she and I wanted to do. One day we’ll hang out; this is the first collaboration where I haven’t spent time with the artist. She bodied her verse though!”

Your forthcoming EP is set to feature other artists including Jawny. How has this project changed your approach to collaborating?

“I write alone and in my own bubble, so I instead give the half-finished tracks to each collaborator to add their verses in their own time. I have no idea what the recording process is like for each of them, but they all add their own twist to my songs. I feel like each song caters really well to each person’s strengths.”

You’ve also been writing with Metronomy…

“Yeah that’s right! I’m super stoked. I’ve mostly been working with Joe [Mount] as he is a producer, and he sent out eight stems for tracks to a couple of artists, so it was a pick-and-choose situation. I just chose a track, grabbed the drums, and added vocals and bass and then went from there, because that was the one that I was vibing with the most.

“I’m really excited about this because I’ve listened to Metronomy’s music my whole life – they’re huge in France!”

What are your ambitions for the future?

“I feel like shifting gears between making music and then working on the accompanying video has always been something that I’ve relied on other peoples’ help with. So at some point, I would like to direct my own videos, as I want to make a future project with a story arc.

“I’d also love to start producing for other people. To me, that is the right way to exit my own sphere; I ultimately want to help someone else fulfil their vision.”

Spill Tab’s ‘Indecisive’ featuring Tommy Genesis is out now. Her debut EP will follow in October