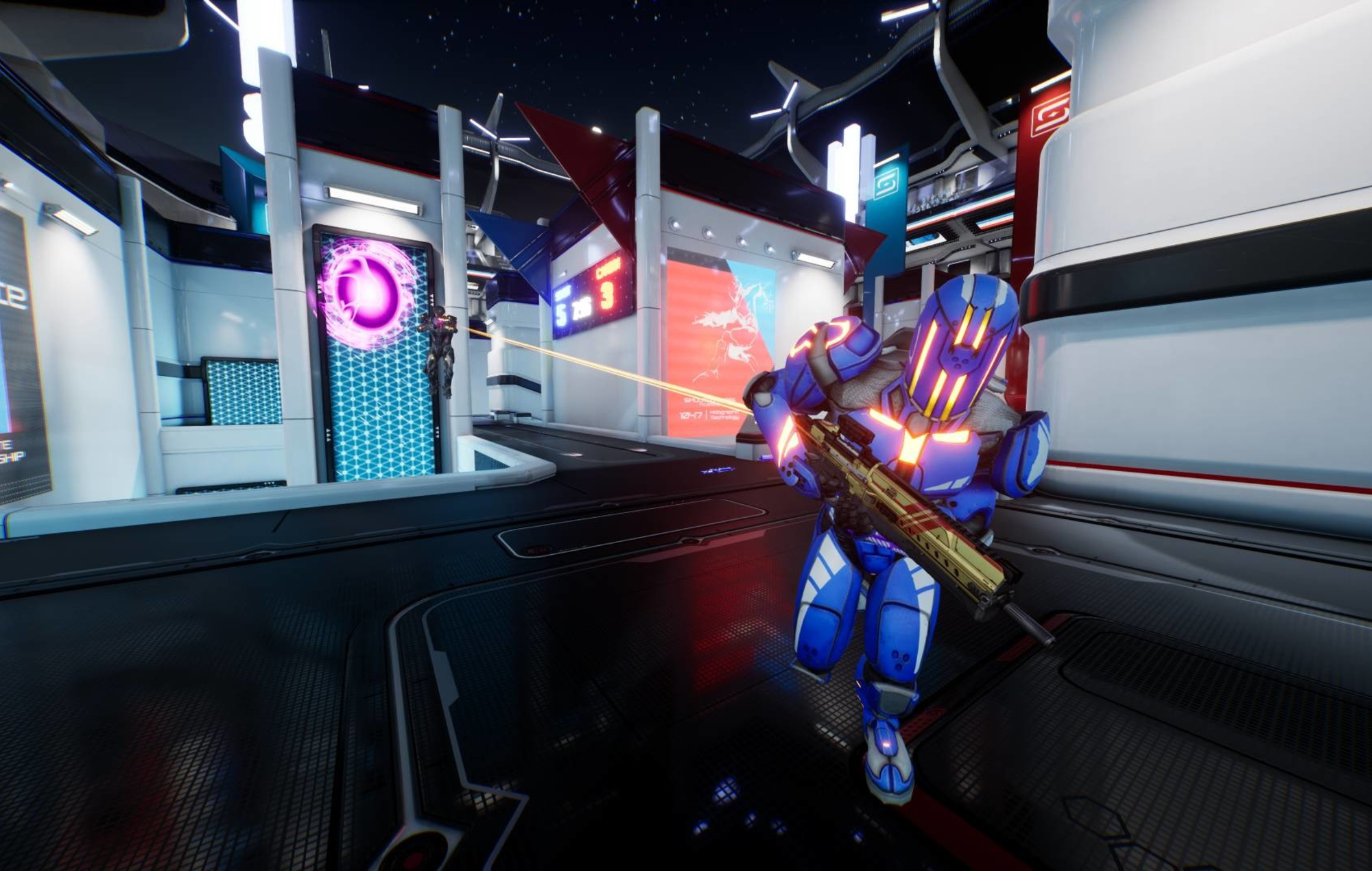 It’s no secret that the first-person shooter genre has become a bit over-satured, Ready for any developer to stake their claim, everyone seems to have their own flavour of battle royale antics in the works. Aside from the obvious heavy hitters in the free-to-play market, most of them just disappear into the abyss. Is anyone still playing Hyper Scape?

No matter where you turn, every major developer is looking for their next lightning-in-a-bottle idea. Some of them take years to find it. Some never find it at all. In the case of Splitgate, the lifeforce of 1047 Games is positively charged.

At this point in time, Splitgate is so popular that you’ll actually struggle to play it. Queue times can range between ten minutes to one hour. Whilst it is a major capacity issue, it’s quite an interesting problem for the development team to have. Before June, you’d be hard pressed to see more than 400 players playing at once. Now, after its recent console beta launch, over 500,000 downloads have been recorded.

Not bad, for a game with only 25 people working on it. Embracing the game’s “Halo Meets Portal” tag line, Splitgate’s success is clearly that of passion over profit. Visit their official website and you’ll find an abundant mention of Halo. The comparison might be marketing gold, but it isn’t made with an alternative agenda. This game itself is a portal back to a golden age of gaming.

Why has Splitgate become such a sleeper hit? Because it’s making multiplayer fun again.

As gamers currently experience a hacking epidemic and dwindling interest in seasoned IP’s, the feeling of pure, simplistic fun is shining once again. Splitgate is a true ode to the legendary pillars of the FPS genre.

As described by 1047 Games themselves, Splitgate “aims to bring back the glory days of PvP shooters”

It isn’t just Halo that Splitgate owes a debt to. Epic Games and id Software laid down the foundations for their success in the 90s. Smash hits Unreal Tournament and Quake reveled in the electrifying grandeur of competition.

Modes like Deathmatch and Domination, that are so commonplace today, were groundbreaking landmarks in the path to multiplayer greatness. They worked because of their easy-to-learn yet hard-to-master rhythm is easy to dip in and out, and it’s simple to get back on your feet after a death.

The modes both have a welcoming skill ceiling meant that anyone could be part of the fun. Nowadays it is unfortunately a different landscape. Naturally, with emerging trends and evolving game design comes a new level of difficulty. Constantly changing weapon metas and balancing mean the experience is never the same. Heraclitus, a Greek philosopher born in 544 B.C, once said “No man ever steps in the same river twice” and he could have been talking about live service games in 2021.

Players struggling to keep up will probably be able to find a wealth of Twitter threads suggesting simply increasing your skill level. That’s the polite way of putting it, at least. Sure, Splitgate will undoubtedly see adjustments to it’s mechanics, weapons and balancing as it grows. Despite that, I’m not afraid of these changes. Of course, that is in part to 1047 Games’ refreshing transparency with their audience.

They’re seeing feedback, be it positive or negative. And they are listening. Could this consistent back and forth last as Splitgate hopefully turns into the colossal success it deserves to enjoy? I certainly hope so.

Jumping into the game opens up the floodgates for unfiltered fun. Backed by classic modes of FPS past, the following are just some of Splitgate’s menu for destruction:

Outside of the massive industry titans ala Call of Duty and Battlefield, it has been quite some time since a new property has attempted to make classic FPS gameplay cool again. Rivals like Rogue Company and Rainbow Six Siege operate in their own tactical space, whilst Splitgate aims to once again keep it simple.

Nevertheless, the key to Splitgate’s gameplay doesn’t have to be treated purely as a vessel for transportation. Spread around the vibrant verticality of each map, are opportunities to create portals. Their purpose can be bent to your will. The player can soon realize Splitgate’s rules are meant to be broken with impressive innovation.

Want to use your portal as a window to survey yourself CCTV style? Or do you want to break the mind of your opponent within seconds? That, and many other choices, are left up to you. The nature of combat here isn’t just grounded within traversal, but it’s a battle of temporal strategy too.

Will you have time to set up the right path? Is your rival tracking your portal process to trick you? These crucially exciting gameplay opportunities are available to unravel. Just as crucially, you don’t need to unravel them if you don’t want to.

Thankfully, Splitgate is just as strong without the addictive portal mechanic. Borrowing from the Doom page of ballistic carnage, gunfights are thrilling displays of Halo 3 adjacent badassery. The weapons available don’t shy away from that fact either. Rail-guns and snipers hit with the same satisfying punch just like they did back in 2007. Accomplishing wondrous feats in the arena are backed with an announcer paying homage to that era too. Hearing “Killing Spree” boom over the battlefield doesn’t get any less adrenaline inducing.

1047 Games’ aren’t completely off the hook though. Battle Passes and cosmetics have become a guaranteed path to revenue. Studios need to make money. Employees need to get paid. Yet Splitgate still commits the same sins of their higher budget rivals – lackluster skins and emotes are available in exchange for real life cash. With such amazing influences to pull from, it’s a shame this isn’t reflected here.

However, Splitgate is still fairly fresh onto the scene. Even with a $10 million cash injection, there is a lot of work ahead to ensure this level of success pays off. It’ll be interesting to see how 1047 Games’ flagship title fares on the eve of Halo Infinite later this year. Will players stick around for teleportation fueled battles? We’ll have to find out as the year rounds out.

Splitgate is the FPS we didn’t know we needed. I’m so damn glad it’s here.

Splitgate’s beta is live now, and can be played for free, wherever you want to play