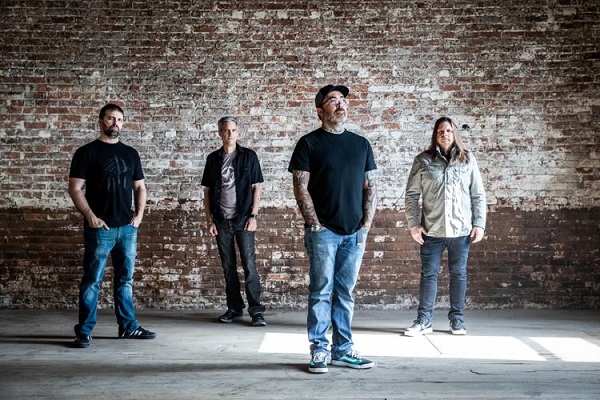 Staind guitarist Mike Mushok joins Anne Erickson to discuss the legacy of the band’s seminal 2001 album, “Break the Cycle,” as well as the follow-up, 2003’s “14 Shades of Grey”

When it comes to influential albums of the early-2000s, Staind‘s “Break the Cycle” is key. The emotive rock record captures the zeitgeist of the post-grunge movement. It also features one of the most popular modern rock songs of all time, “It’s Been Awhile,” still a staple on rock radio.

“Break the Cycle” arrived on May 8, 2001, and recently passed its 20th anniversary. In honor, the band released a new live album, “Live: It’s Been Awhile,” filmed during Staind’s seminal 2019 shows at Foxwoods Resort Casino in Connectict. Those gigs marked the band’s first time together on stage in five years.

While Aaron Lewis is the voice of Staind, there’s no denying the importance of guitarist Mike Mushok’s grungy riffs and guitar melodies to the band’s overall sound. Mushok spoke with Anne Erickson of Audio Ink Radio about the “Break the Cycle” era; what life was like for Staind going into their next big record, 2003’s “14 Shades of Grey”; the classic Family Values Tour; and more. Read the full Staind interview below, listen via the YouTube player and hear it via the Audio Ink Radio show on Apple Podcasts here and Spotify here.

Staind will hit the road with Korn on a U.S. tour in August. Find Staind and Korn tour dates here. Find more on Staind on their official website.

Anne Erickson: Congratulations on the new live album, with Staind, “Live: It’s Been Awhile.” What inspired you guys to release a live set right now?

Mike Mushok: We got back together towards the end of 2019 and did a handful of shows, and we were going out with a larger production than we’d used in the past, and having not played in so long, we thought it would be cool to capture what that was like. We had two shows, which we kind of considered hometown shows at casinos here in Connecticut, so we filmed that. I think the idea of the live album came from that, that we captured it. We watched it and were listening and we were like, let’s put something together. We captured that and thought it would be something cool to get out there.

That concert was Staind’s first after a five-year hiatus. What did it feel like to get back on stage with the band after five years apart?

Yeah, and even the stuff we did give years before was just one tour. It was great to be able to get back up there and play those songs again and revisit that. It’s something I’d always looked forward to and was hoping we could making happen, and I’m glad we were able to.

Staind just passed the 20th anniversary of “Break the Cycle,” which was such a seminal record for that era. Did you ever think “Break the Cycle” would experience the success it did?

If I go back to when we did it, I kind of talk about how I remember when the album was done, we were all listening to it, and I felt like we had accomplished what we wanted, and I was really proud of it, but no- nobody can really predict. There are things that I thought would do great but haven’t, so you don’t really know. So, we’re just very thankful for what that record did and how it helped set up our careers. It was great to revisit that, as well, and get together and play those songs that we hadn’t played, and some of them I don’t think we’d ever played out live.

I remember that first weekend and how well the record did. I never expected that it would be No. 1 three weeks in a row. I remember some of the shows we did around then, and I remember we did this free show in Atlanta at Olympic Park. They had this concert series where every Friday night they’d have a band come in and play a free show, and whoever wanted to come could come and do it. I remember they said, usually about 10,000 people or so (show up), and I remember we were in this tent backstage, and the police came in, and they said, “There are 45,000 people here! Can you guys go on now?” So, they had us go on earlier. Just things like that. It was just cool. it was a really fun time.

In two years, you’ll have the 20th anniversary of another great Staind album, “14 Shades of Grey.” What do you remember about that time?

It all kind of blends. What I remember about “14 Shades of Grey” was that it was really hard to follow up what “Break the Cycle” was because there was an expectation from management (and) our record company. I remember joking at the time, “We should just do ‘It’s Been Awhile’ 12 times and send it to them and tell them it’s the record, because that’s what they want!” (Laughs) There were all these other people. I remember when we did “Dysfunction,” I mean, nobody said a word to us. We just went. We recorded the record. We turned it in. We put it out. We toured. And, then after “Break the Cycle,” everybody gets involved and has an opinion. So, I knew “14 Shades of Grey” was even harder because of “Break the Cycle,” and that was really kind of put on us by some of the outside people that you deal with. The bottom line is everybody wants it to do well, and we did, as well, so you kind of just deal with that.

A lot of people got to know Staind on the Family Values tour with Limp Bizkit, Korn and a bunch of bands from that era. What’s your best memory from that run?

Kind of the comradery of all the other bands, but I got to say, it’s super sad. I remember going around at the end of that tour, and I had a drumhead and had all the bands sign it. I mean, Wayne Static was on there. Scott Weiland was on there. Chester was on there. It’s like, oh my God, more than half the singers are not around anymore. it’s crazy to think of that. But, listen those tours were a lot fun. It’s just a fun time.

I had forgotten Static-X and Wayne Static were part of Family Values. Wow. I was actually going to ask about Chester Bennington. Did you know him?

Yes, I did know Chester. Aaron knew him and hung out with him more, but I mean, I hadn’t seen him much since then. A couple of times we played with him since, but every time I saw him, he was a super sweet guy, and what a great voice. It’s so sad. I don’t know what else to say. You just wish that people realized that there’s help out there. It gets to the point that they think there’s no other solution. I know it’s devastating what they leave behind.

Post grunge has a remarkable staying power. If you turn on a modern rock station today, you still hear Staind, Shinedown and Seether and bands that broke out during that time. Why do you think the genre has such longevity?

I think there’s kind of an honesty to it. I feel like from my perspective of what Staind is, I feel like a lot of what Aaron (Lewis) sings about people can relate to, because it’s things that he’s gone through and emotions that he’s felt, and I think it’s probably the same from Brent (Smith of Shinedown) and Shaun (Morgan of Seether) and that same type of group that you talk about. Besides, as with Chester, those guys are all just fanatic singers and have just such great voices. I just think there’s a lot of talent from the people that came out of that era. Not that there’s not now, there is, but I think like they’ve kind of been able to stick around a bit, which is fanatic.

Can we expect to hear new Staind music or a new album of new tracks at some point?

Yeah, I mean we’re working on that now. Aaron was finishing up a country record, but he’s just about done with it. I think the idea is once that’s completed, we’re going to- there’s a bunch of songs kicking around. It’s just kind of sorting through that stuff and seeing what, if anything, we like and figuring out. I imagine having not put out a real record of new music in 10 years, we’re going to be pretty critical of what it is and want to make sure that it’s great. But, yes, there is talk of that. We actually signed a record deal and have a deal to do a new record.

So, now you have to do a new album, because you signed the dotted line!

Exactly! It’s nice when you do that, because it kind of makes you do it. It makes you have to do it. You don’t have an out!