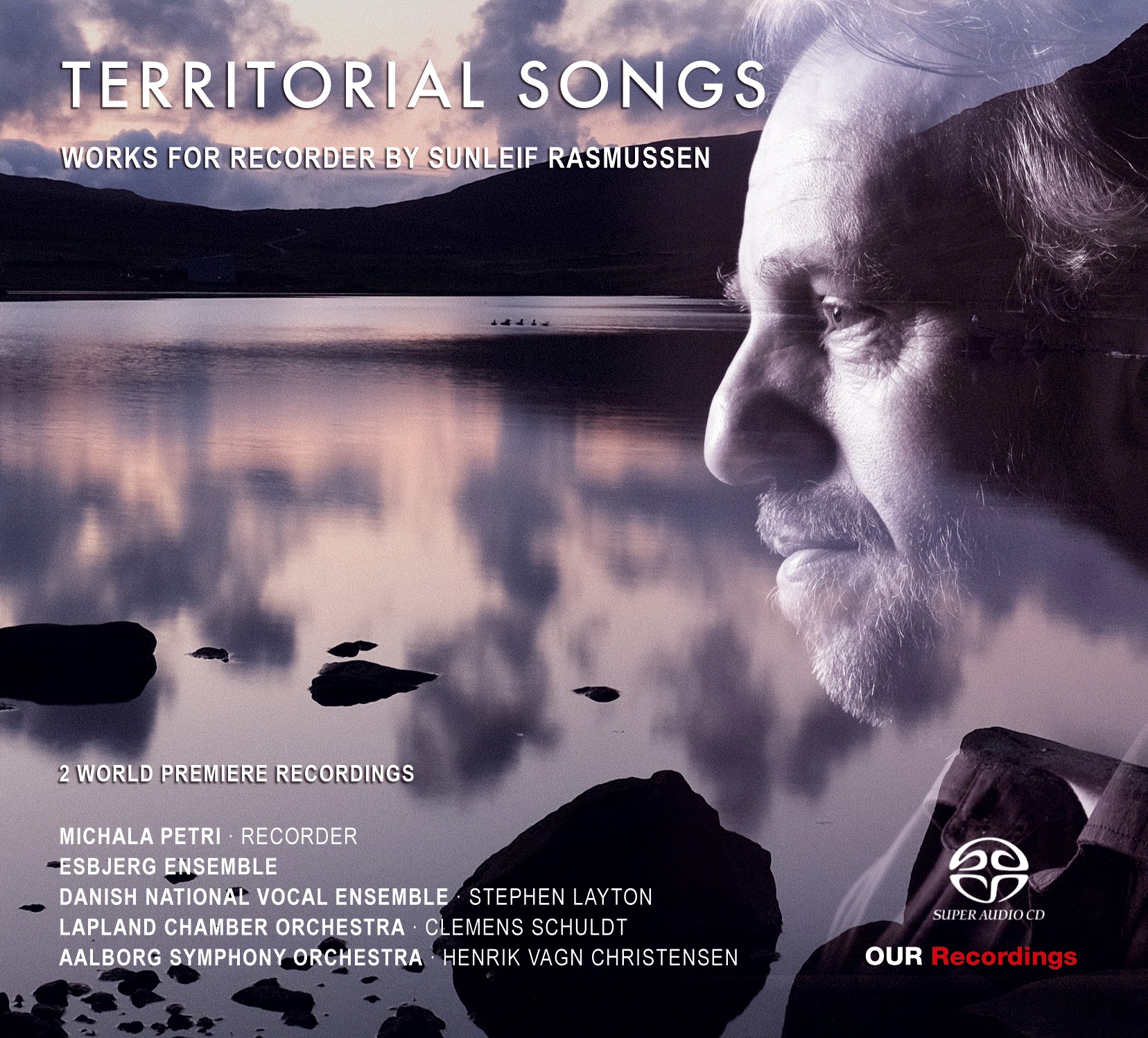 Territorial Songs, a new CD release from the Our Recordings label features 72 minutes of distinctive recorder music by Sunleif Rasmussen. A native of the remote Faroe Islands, Rasmussen is nevertheless widely known for his compositions. He received critical acclaim in 2002 when his Symphony No. 1, Oceanic Days won The Nordic Council Music Prize. A particular passion of Rasmussen over the years has been the composition of recorder music and this CD is the product of his creative attempts to bring the recorder into a contemporary context. Michala Petri, a prominent recorder player, performs on all the pieces and whose virtuosity is clearly key to this project. The eleven tracks on the CD span a wide range of musical forms – from recorder solo pieces to accompaniment by small ensembles – all the way up to a full orchestral treatment. Rasmussen has made the recorder the centerpiece for all the works on this album and he has succeeded brilliantly in bringing new relevance to this seemingly humble instrument.

Flow (2012), for recorder and string trio, is the first piece on the album and consists of three movements. Inspired by Mozart’s Flute Quartet in D Major, K. 285, Flow as heard on this album is a world premiere recording. The “Allegro” opens with a nicely active rhythm in the strings while the recorder rides above the accompaniment with an agile phrasing that features an impressive flexibility. The harmonies offer a hint of tension so that the result is pleasant and unsettling at the same time. The part writing is complex, but beautifully played and the recorder darts in and out of the broken rhythms that make up the overall texture. “Tranquillo”, the second movement, begins with soft cello notes that produce an easy and relaxed feel, propelled by an ambling pizzicato line in the violin and viola. The recorder entrance features an almost clarinet-like timbre and includes a series scales and runs that contrast well with the strings. At about 4 minutes into this movement, low buzzing cello sounds build a strong foundation while at the same time introducing an element of tension as the pizzicato line becomes more frenetic. Soon, the recorder sounds fuzzy as well, and the piece slowly loses it’s opening tranquility. Towards the finish, high, thin and sustained tones in the violins add a feeling of sharpness. The Esbjerg Ensemble accompanies with skill and sophistication. The part writing is brilliant here, with each instrument making a distinctive contribution to the whole.

“Rondeau”, the third movement, features busy string phrases with the recorder melody reaching to the heights above. There is a sort of a stop-and-go feel to this; the passages are independent in the various parts and detached from the recorder line. As usual, the ensemble is tight and it seems as if there are more instruments playing than scored. The orchestration is artfully done, always leaving enough acoustic space for the clean sounds of the recorder solo. Impatient and active, the recorder is allowed cut through the texture and at times, dominate. All of this results in an appropriately upbeat ending to Flow.

The second work on the CD is Jeg (2011), and this features the bass recorder accompanied by a cappella choir, the Danish National Vocal Ensemble led by Stephen Layton. Based on Danish modernist poet Inger Christensen’s text, the piece opens with a hauntingly deep recorder solo that establishes an exotic feel. As the choir enters, several separate lines of voices are often heard as the recorder obbligatto weaves in and around the vocals. Once again the orchestration is extremely precise, allowing a complex interplay to unfold between the voices and the newly-entered soprano recorder. The vocals are faintly reminiscent of Benjamin Britten and carry the drama solidly forward, always engaging the listener. A solemn recorder solo completes this piece.

Sorrow and Joy (2017), another world premiere recording, is the third piece on this CD and is written as a fantasy for solo recorder. The opening line is clear with a simple, declarative melody inspired by Thomas Kingo’s, hymn Sorrig og Glæde (sorrow and Joy). The tone is somber and reserved but soon variations in the melody lighten the mood, as if the melancholy is lifting. In his excellent liner notes, Joshua Cheek writes of this piece: “Thomas Kingo, (1634 – 1703), was a clergyman and poet whose works are considered the high point of Danish Baroque poetry. For the musical component Rasmussen takes Kingo’s melody and subjects it to 12 figural variations, which become increasingly virtuosic, the final variation also functioning as a cadenza.” The great underlying strength of the hymn tune compliments all of these variations superbly, even as the agile recorder notes dart in and around the stolid cantus firmus. Sorrow and Joy is perfectly centered in its Baroque context, equally pleasing to the ear and brain. The performance by Michala Petri is simply sublime.

Winter Echoes (2014) follows, a work for recorder and 13 solo strings, as performed by the Lapland Chamber Orchestra directed by Clemens Schuldt. This begins in the strings with a low growl accompanied by short, insistent passages in the upper strings. Quiet recorder phrases thread carefully through the string passages which are scored to allow space for the solos. The piece progresses in three sections, creating what amounts to a convincing portrait of the wintry mix of weather common among the islands of the North Sea. The recorders employed progress from bass to sopranino and as the pitches rise, the mood progresses from dark to light. The very high recorder passages towards the finish add a compelling, icy sting. Winter Echoes is more complex than, say, Vivaldi’s “Winter” movement of The Four Seasons, but both share the same needle-sharp edges.

Territorial Songs (2009) is the final piece on the album and is a concerto for recorder and orchestra consisting of five short movements. The solo recorder is accompanied by the Aalborg Symphony Orchestra. According to the liner notes: “The idea for the piece came from the singing of birds. In nature, bird song has two main functions: to defend a territory and to attract a mate. Rasmussen extended this idea of ‘territorial space’ to the orchestra as well letting some sections play independent of the conductor, marking their own territory within the orchestral landscape.”

“Leggiero”, the first movement, opens with tubular bells at the start followed by rapid orchestra phrases. The recorder line is independent of the orchestra and has a distinctly abstract quality that goes its own way. The bells add a touch of the transcendental, as if the forest is a cathedral. The interplay between the orchestra and recorder nicely captures the confident chirping of a bird in the wood. “Misterioso”, the second movement, continues with the tubular bells and repeating mystical phrases in the harp, followed by muted trumpets. The recorder enters with syncopated passages that weave in and out of the accompaniment to great effect. Pizzicato strings bubble beneath the recorder, adding to the mystery. This is extremely well orchestrated, allowing the recorder to dominate the texture without getting lost in the accompaniment. The movement is abstract and complex, yet beautifully cohesive.

The final movement, “Leggiero”, opens with insistent drum beats and powerful lower string phrasing. The other sections of the orchestra join in to create a swirling palette of sound. The recorder enters with a dizzying series of scales ending with a sly solo stretch. The orchestra and recorder take turns dominating, but never interfere. A fabulously frenetic finish completes the concerto. With Rasmussen’s brilliant writing, the recorder stands a bit taller now in the woodwind family. Territorial Songs is a masterful pairing of the full orchestra with the slender sound of the recorder such that the excellent orchestration and solo playing contribute equally to its exuberant success.

Territorial Songs is available from Amazon Music and is also distributed by Naxos.