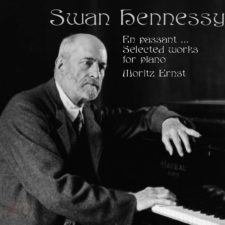 Swan Hennessy (1866-1929) was born near Chicago, studied in Stuttgart as a teenager, and eventually made his way to Paris in 1903, where he lived for the rest of his life. His idiomatic and well-crafted piano music is hard to pigeonhole, although pianist Moritz Ernst’s excellent and informative annotations discuss the prevalent Celtic influence in Hennessy’s later works.

The humorous dotted rhythms in Mondaine (the fourth piece of Croquis de femmes Op. 33) suggest how Schumann and Chabrier’s love child might have turned out to be. Au bord de la forèt Op. 21 is mostly slow moving and stark, save for a brief animated interlude. The first of the two Fêtes Op. 36 wouldn’t be out of place in a zesty Poulenc group, while the second piece is late Scriabin as if recomposed by late Debussy. The three-movement Sonatine may take its cue from Ravel’s similarly structured work, yet the harmonic language and content lean toward Roussel’s darker sound world.

Hennessy’s melodies don’t easily stick in the memory, but his strong feeling for form and dramatic timing hold your attention. So do Moritz Ernst’s colorful and committed interpretations, which, however, might have benefited from more luminous engineering. An attractive release for piano fans drawn to obscure yet worthy repertoire.

Reference Recording: None for this collection