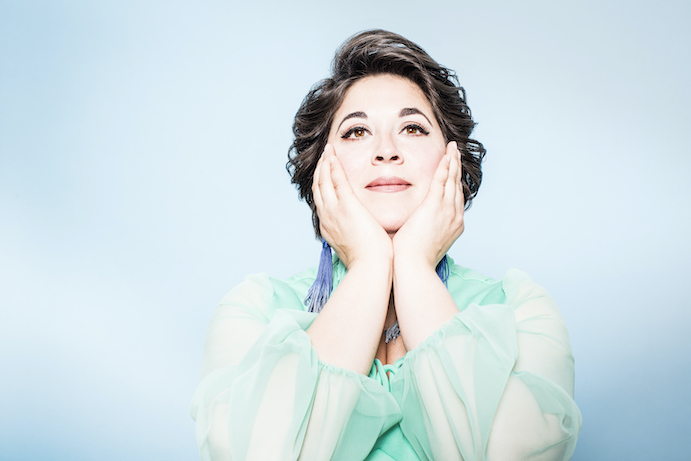 If you have ever been the victim of credit card fraud or been lured into a dating app subscription, or if you remember Edward Snowden’s global surveillance scare, you’ll agree there’s a disquieting dark side to the ubiquity of cyberspace. This is the subject matter of Kamala Sankaram and Rob Handel’s synth-pop, minimalist cyberpunk musical Looking At You, the first recording of which becomes available digitally and on a limited supply of flash drives on July 16, 2021 on Bright Shiny Things.

Scored for six singers, saxophone trio, piano, and electronics, Looking At You is primarily a theater piece, whose 2019 premiere at Lower Manhattan’s HERE Arts Center was critically acclaimed. By necessity, much is lost without the immersive experience of the live show; in fact, what made the performances quite stirring was the live data-mining component that drove home the point of the piece. Sitting at Rix headquarters—the fictional tech company where much of the action takes place—audience members were offered a free drink in exchange for their email address, which was then matched with ticket ordering details, faces, names, and social media profiles to serve up photos and status updates for all to see later in the performance. With that caveat, the new recording of the full 86-minute pop opera still has its highlights, minus the stage action. The strength of the original sextet of singers carries the weight of the album: mezzo-soprano Blythe Gaissert in the lead as Dorothy, a new employee at Rix who develops the dating app CheckUOut with an algorithm that outgrows its original purpose to dig up more private data than it should; Paul An as Raj, a buffoonish top executive at Rix; Brandon Snook as Ethan, a Snowden stand-in; and Adrienne Danrich, Eric McKeever, and Mikki Sodergren as a charming trio of Rix geeks.

The bulk of the instrumental accompaniment, conducted by Samuel McCoy, consists of pulsating beats and robotic synth progressions without much room for subtlety of expression, though befitting the blend of EDM and motoric chamber music at its heart. Jazzy saxophone riffs (Jeff Hudgins, Edward Rosenberg, and Josh Sinton) support basic harmonies from the piano (Mila Henry) and electronics, and Sankaram’s vocal writing accomplishes much within that stripped-down foundation.

The opening number, “This is Where the Winners End Up,” has a catchy, arpeggiated electronic sequence; the chorus of geeks takes on a charming quaintness with an accented, uneven rhythm as they introduce the dicey, sometimes questionable goings-on of Silicon Valley tech giants like Rix. Later in the piece, that chorus returns as a hook for the narrative; in the closing “Product Launch,” it undergoes a minor-key transformation, with sinister washes of dissonance from the saxophones. Eric McKeever, Mikki Sodergren, Paul An, and Adrienne Danrich in the 2019 premiere of Looking at You at HERE Arts Center–Photo by Paula Court

The electronically voiced Tablettes, chattering indistinctly with snippets of personal information pilfered from users, impart an unsettling mood of ultra-vigilance, like an inescapable cyber-presence in the ether. The score takes a menacing turn in Ethan’s first appearance as the parallel Snowden story begins to unfold: Ethan, Dorothy’s former lover, blows up the news when it is announced he has leaked 1.7 million classified files. With soft piano musings and sax fluttering, the melancholic “Scrolling Back” evokes nostalgia as Dorothy rereads old text messages exchanged with Ethan. In “Bike,” the saxophones take the lead, while the piano adds a subtle chirping, as Ethan hacks Dorothy’s Fitbit to contact her.

There are also solos for the supporting singers that elevate a few somewhat monotonous passages: In “Flashback”—a trio for Dorothy, Ethan, and an intruding journalist—Sodergren, playing the journalist, outshines Gaissert with her ‘OK Mister Mystery’ solo. Her voice aims for a soulful mix between cabaret and Broadway, breaking the back-and-forth between Dorothy and Ethan. It is a great moment, with some of the composer’s best vocal writing. In “Geek Trio (Nothing to Hide),” Danrich, as the geek Annina, shakes up the tedious electronic sequence of the first half with a high-caliber operatic spotlight. She sings of how we can feel entitled to our rights and privacy, “but the problem is because you’re white, you’re not accustomed to being surveilled,” she says—one of Handel’s hasty lines that come across as more provocative and topical rather than thoughtfully fleshed out. And a problem with the libretto is that at times Looking At You tries to juggle a bit too much: Other than predatory data mining and runaway artificial intelligence, the libretto flirts less convincingly with gender roles in the workplace and race relations.

Yet, Looking At You develops an edgy narrative with a propulsive cyberpunk soundtrack, even if the plot details ultimately matter less than the general message: When weighing our privacy against the conveniences of the digital world, we soon realize that the comfort of our unexploited personal lives is non-negotiable, even when we feel we have nothing to hide.