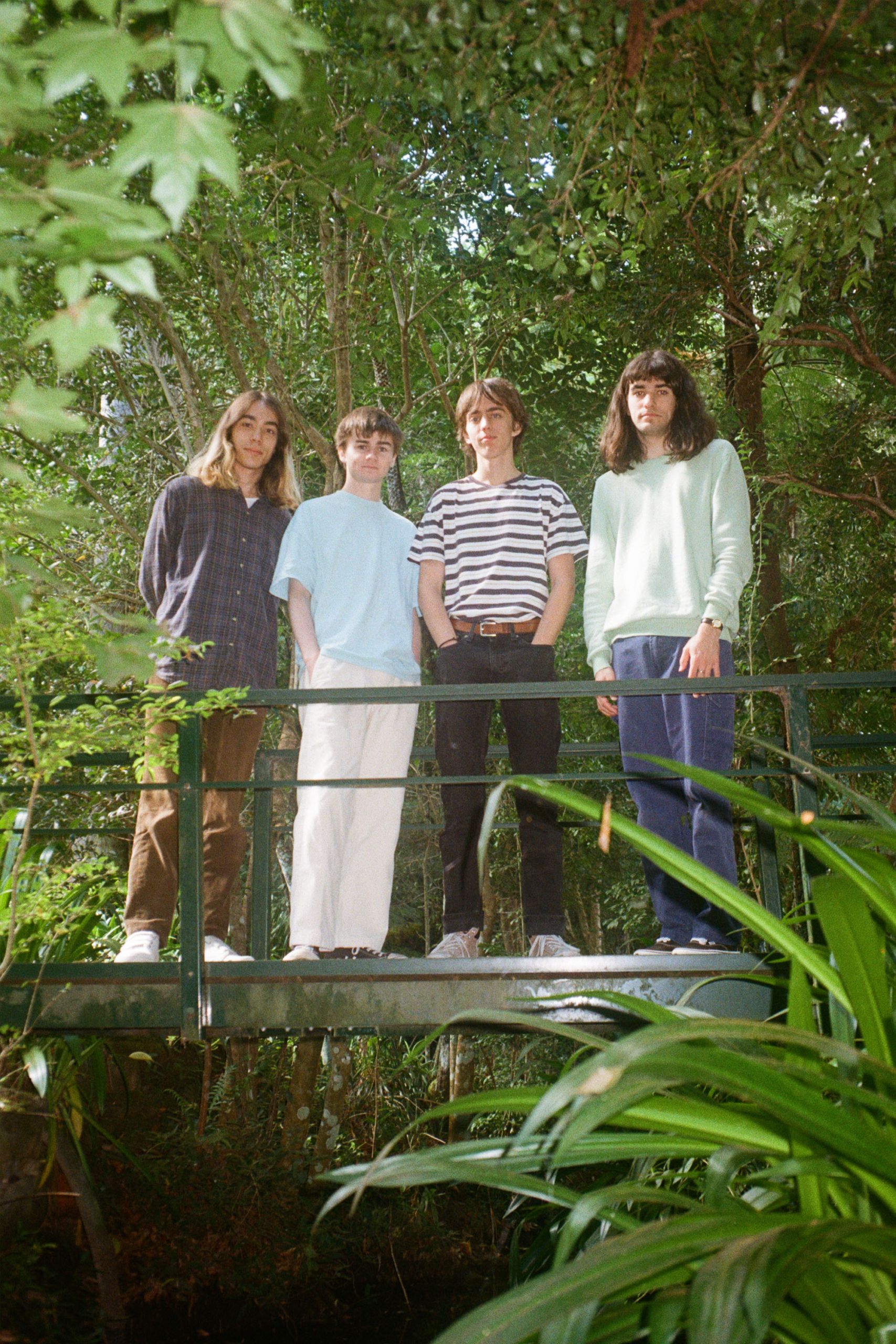 At the end of The Lazy Eyes’ first proper show, vocalist/guitarist Harvey Geraghty over-excitedly told the crowd that they’d be releasing an EP soon. It turned out “soon” meant five years later, in 2020. “Things just took a lot longer than we thought they would,” Geraghty tells NME today, Zooming from his home in Sydney.

By comparison, their second EP (out July 23) is being released at breakneck speed. It offers a more confident, expansive take on the psychedelic rock of ‘Cheesy Love Song’ or the hip-shaking groove of ‘Tangerine’, so it’s not a stretch to assume ‘EP2’ was created following the global attention that ‘EP1’ earned. Besides an outpouring of local support, the band were booked at taste-making festivals like SXSW in America and England’s The Great Escape. “We didn’t feel worthy,” says Geraghty.

Turns out ‘EP2’ was also written years ago while the band were still in school, and their upcoming but unfinished debut album was written around the same time as well. “It’s almost done,” beams Geraghty – though maybe take that with a pinch of salt. “Personally, something that I’ve taken away from this band is how shit always changes,” chimes in guitarist Itay Shachar.

“They’re all good songs,” says drummer Noah Martin of their decision to still release those early tracks, even though they haven’t stopped writing in the three years since graduation. “It makes sense to let them see the light of day. Eventually we’ll get to the stuff we’re writing now.” The leap in quality, they say, comes from the band upgrading their production toolkit from Garageband to Ableton. “We just got the hang of how to record things. We know how to get what we want onto the tracks,” says Shachar.

“We don’t want the songs to ever fall on deaf ears. There’s not really any rush anyway,” he adds. “It doesn’t feel like we’re taking our time. We just want to do things right.”

Bassist Leon Karagic, drummer Martin as well as guitarists Shachar and Geraghty grew up playing their respective instruments, but their desire to form a band only started while they were attending a performing arts high school. “It was mostly string and horn players creating ensembles, so we didn’t really have much of a choice,” grins Geraghty.

What started as lunchtime jam sessions quickly turned into the boys taking to the streets of Sydney and performing Katy Perry covers for loose change. Their own headline shows soon followed. In 2019 they supported The Temper Trap across Australia and before COVID-19 hit, they played alongside Earl Sweatshirt and The Chats at Laneway Festival.

Despite starting at school, “The Lazy Eyes never felt like it was just a ‘school band’,” according to Geraghty. When the four-piece left school in 2018, there were no conversations about packing it in to search for proper jobs. In fact, The Lazy Eyes “felt this pent-up energy. We were determined to give this band the attention it deserved. We knew there were things we always wanted to do but couldn’t because of school”.

So The Lazy Eyes set up Lindfield Studios in the apartment below Shachar’s parents. A place to practice, write and record, it gives the band as much time as they need to create their dynamic tracks. Luckily, after all these years, Shachar’s parents still aren’t complaining about the noise.

“It’s hard not to wear your influences on your sleeve,” Shachar acknowledges. “When we were young, those bands were some of our heroes, so I get it.”

“We might not even be a band if it wasn’t for Tame and Gizz. They’ve paved the way for a lot of young artists,” says Martin. “There are so many artists who hit it big in Australia but don’t attract much of an international following,” Karagic adds. “It’s inspiring to see them tour around the world, drawing huge crowds. The comparisons aren’t something to be afraid of.”

“I just feel like we’re more than a psychedelic rock band, though,” says Martin. “Noah doesn’t like being boxed in,” quips Geraghty.

Their quest to be something more starts with ‘EP2’, which was heavily influenced by ‘Bon Voyage’, the 2018 alt-pop album by Melody’s Echo Chamber, the band led by French musician Melody Prochet. “It’s such a tapestry of layers and textures,” Geraghty continues. “She really didn’t care if one thing only came in for a moment. We were really inspired by how crazy it got.”

It’s why ‘Where’s My Brain???’ mixes Black Sabbath riffs into their psychedelic explorations. Geraghty wrote it hoping it would help punters let loose: “When it was written, we were getting into heavier music and our live set was really lacking some mosh music.”

Like all of their songs, the lyrics extend the vibe of the track. ‘Where’s My Brain???’ is about “losing yourself” while the nostalgic ‘Nobody Taught Me’ talks about Geraghty’s childhood holidays to visit his grandparents in the English town of Royston. He’d make friends but when he returned next summer, they’d moved away.

And when Geraghty hears the tropical epic ‘The Island’ (also a prequel to ‘EP1’ track ‘The Seaside’), “I can picture this utopia vividly. It’s a song for escapism.” The idea of going someplace else is a constant throughout The Lazy Eyes’ music. “It’s just a tool to escape the struggles of life,” says Shachar. But the band don’t necessarily believe in escaping into the riff – losing yourself in self-indulgent wig-outs, like too much psychedelic music tends to do. The Lazy Eyes hope every moment of their expansive songs has something to say.

“It’s something we think about way too much,” says Shachar. “We enjoy it when bands know what they’re doing and they’re not just improvising for the sake of it. Just get to the point, y’know?”

For a band who refuse to put their music in a box, it’s no surprise that The Lazy Eyes are just as open-minded about what success could look like. They already have their debut album planned out, as well as the era that’ll follow. There’s talks of making Lazyfest, their festival that caters to under-18-year-olds and had its first outing in March, an annual event. “We know the struggle of being that age and wanting to see live music, but not being able to. It’s when you’re most passionate about it as well, so it’s just annoying,” says Geraghty.

Then there’s the small matter of finally playing those international festivals next year, if COVID lets them. “We won’t not give it a shot,” says Martin confidently before the rest of the band start teasing him. “Is that really the best hype slogan you can come up with?” needles Geraghty. “What does it even mean?” asks Shachar before helping him out.

“We’re just taking it day by day because being an artist, it’s one of the most random careers ever. It’s like gambling. You can’t really expect anything so we just want to do the best we can and have a good time. Fingers crossed though; anything is possible.”