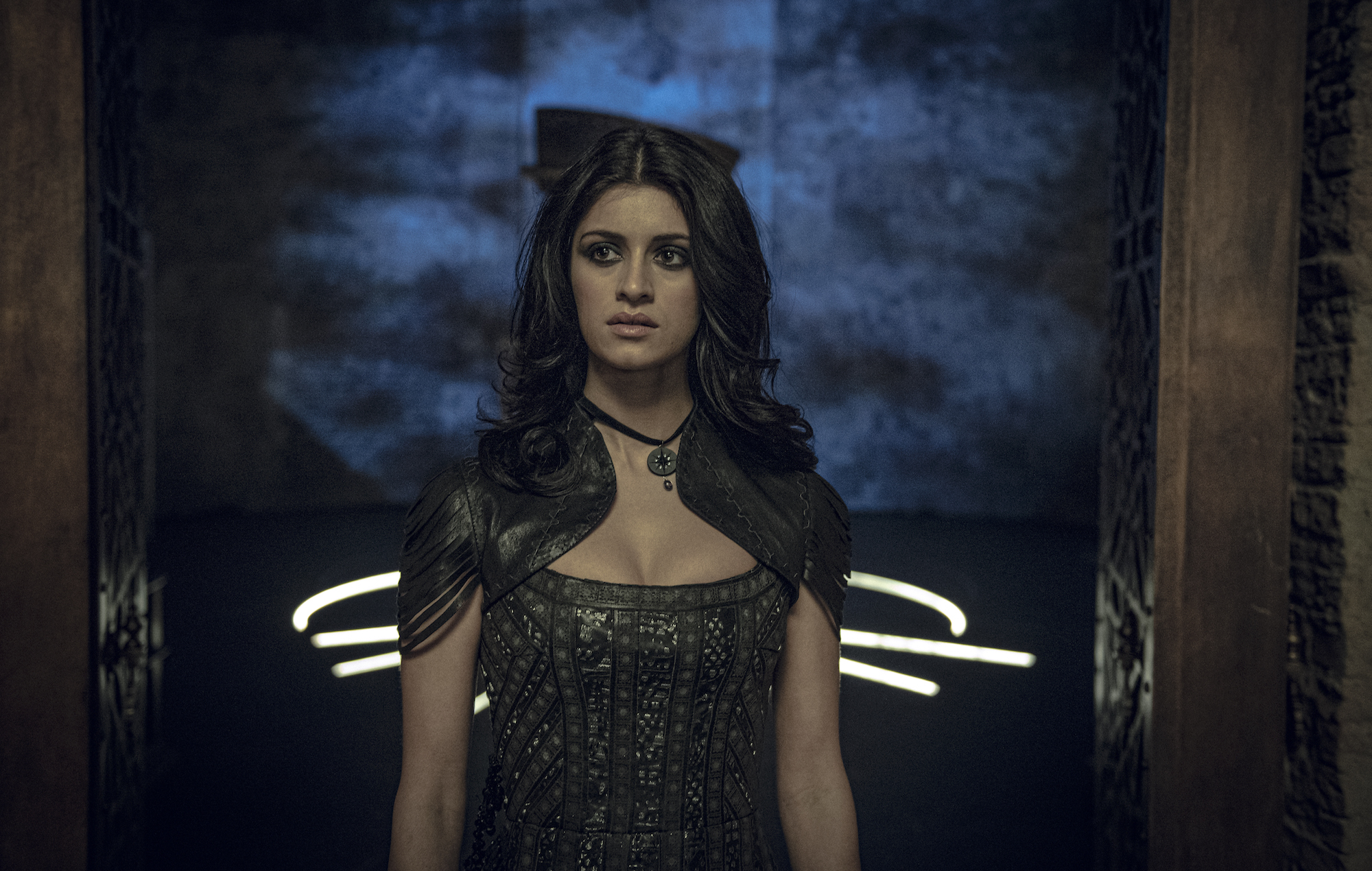 Swords! Sex! Swearing! Are there three ingredients more integral to a post-Game Of Thrones fantasy series? Probably not, but luckily for you, The Witcher (your next binge-watch) has them in spades.

Netflix launched its new nymphs-and-nudity romp in December 2020 – and the Henry Cavill-starring show proved a hit with streamers, even making it onto the platform’s most-watched list of 2019. Adapted from Polish author Andrzej Sapkowski’s best-selling books (themselves turned into an iconic video game series), The Witcher follows the fortunes of Geralt of Rivia (Cavill), a solitary monster hunter who ping-pongs from one life-threatening situation to another. Also among the cast are Freya Allan and Anya Chalotra, who play an unwittingly magical princess (Ciri) and a powerful mage (Yennefer) respectively. Basically, it’s The Lord of The Rings but with all the ‘don’t watch with your parents’ bits from Game Of Thrones.

If, like us, you binged all eight episodes in one go, then you’ll be buzzing for more. Here’s everything we know so far about The Witcher season two.

The Witcher season 2 release date: when is the fantasy series returning to Netflix?

As a pre-Christmas treat, The Witcher will return to Netflix on December 17, 2021, as revealed on July 9 at the virtual WitcherCon.

Destiny has revealed itself. Prepare for The Witcher Season 2, premiering December 17 on @netflix. #WitcherCon pic.twitter.com/wx5RuCn11Z

Unusually for a Netflix series, The Witcher was renewed for a second season before it even released its first.

“I’m so thrilled that before fans have even seen our first season, we are able to confirm that we’ll be returning to The Continent again to continue telling the stories of Geralt, Yennefer and Ciri,” showrunner Lauren Schmidt Hissrich said back in November.

When does The Witcher season 2 start filming?

Speaking of the new season, showrunner Lauren Schmidt Hissrich said: “The reaction to season one of The Witcher set a high bar for adding new talent for the second season. Sophie Holland and her casting team have once again found the very best people to embody these characters, and in the hands of these accomplished directors, we’re excited to see these new stories come to life.”

The Witcher season two shut down production last march March amid the coronavirus pandemic, though confirmed in June that filming will resume on August 17.

Sharing the news in poetic verse, the show’s official Twitter account wrote: “I’m dusting off my lute and quill, I have some news, some mead to spill: After all the months we’ve been apart It’s time for production to restart. The Witcher and his bard – who’s flawless, Will reunite on set 17 August.”

I’m dusting off my lute and quill,
I have some news, some mead to spill:
After all the months we’ve been apart
It’s time for production to restart.
The Witcher and his bard – who’s flawless,
Will reunite on set 17 August.

Sharing a new on-set photo as filming resumed in August, showrunner Stephen Surjik wrote on Twitter: “First day back after mid-spring lockdown on Witcher S2. Learning to social distance with my showrunner/exec producer, Lauren Schmidt Hissrich. She can conjure narrative and character with a muscular control like the great Houdini.”

First day back after mid spring lock down on Witcher S2. Learning to social distance with my show runner /Exec producer, Lauren Schmidt Hissrich. She can conjure narrative and character with a muscular control like the great Houdini. ⁦@LHissrich⁩ pic.twitter.com/HVHpuDPSd1

Netflix also unveiled a first official look at season 2 in October with images of Cavill’s Geralt of Rivia in brand new black armour.

A new image of Freya Allan as Ciri was also released – check it out here:

The show was also reportedly filming scenes at Highgate Cemetary in London (via Redanian Intelligence), with the crew preparing lighting instalments and smoke machines in October.

Vilgefortz actor Mahesh Jadu also posted visits to graveyards on social media in the same month, with Lars Mikkelsen (Stregobor) even accompanying him, suggesting there may be more than one cemetery shoot.

The Witcher reportedly finished filming Season 2 on March 31, according to an Instagram story from Henry Cavill’s personal hair designer.

That’s a wrap on #TheWitcher Season 2!

“We are wrapped on Witcher 2!! Only a takeaway menu left on the board,” Rathore wrote.

A new, ‘Season 2 Production Wrap: Behind The Scenes’ was also been shared by Netflix on April 3, confirming that filming on the project has come to an end: you can watch it below:

The Witcher season 2 cast: who is returning for the new series?

All of the main characters from the show’s first edition are returning a second time out. Henry Cavill will once again play the lead as Geralt of Rivia, joined by Anya Chalotra (Yennefer), Freya Allan (Ciri) and Joey Batey (Jaskier).

On February 28, 2020, Netflix confirmed that Kim Bodnia will be joining the cast as Vesemir, the mentor of Geralt of Rivia. Best known for his role as Konstantin in Killing Eve, the Danish actor also played the lead role in Nicolas Winding Refn’s directorial debut Pusher, as well as starred in the Scandinavian police detective series The Bridge.

“A charming relic of the witcher Golden Age, Vesemir is the oldest and most experienced witcher in our series, as well as a father figure to Geralt,” Netflix said in its announcement. “As one of the survivors of the Massacre at Kaer Morhen, a haunting slaughter that nearly exterminated the Witchers, he is fiercely protective of the remaining few, who he sees as an endangered community who can find glory on ‘the Path’ slaying monsters.”

Introducing Vesemir: Kim Bodnia will play the Continent’s oldest and most experienced Witcher in Season 2 of #TheWitcher. pic.twitter.com/HAmYciZ5K4

Lauren Schmidt Hissrich added: “I am so thrilled to welcome Kim Bodnia to the cast of The Witcher. I have admired his unique talents in shows like Killing Eve and The Bridge, and cannot wait for him to bring strength, tenacity, and warmth to the character of Vesemir, who is such an integral part of our upcoming season.”

Other new cast members for the second season include Game of Thrones star Kristofer Hivju, who will play Nivellen, a fan-favourite character from the short story A Grain of Truth.

Asked about the show’s longevity compared to genre rivals like Game of Thrones, Cavill said “it would be lovely to tell the story for many seasons to come”. Basically, if you guys keep watching, they’ll keep making it!

Actor Thue Rasmussen, who was due to play Eskel in season 2 of The Witcher, will be leaving the show and replaced by Basil Eidenbenz. Rasmussen was forced to leave the show after delays through the ongoing coronavirus pandemic led to scheduling issues.

A further announcement came on March 26, with news that Laurence O’Fuarain (Vikings, Game of Thrones) would be joining the cast as Fjall. A description of his character read: “Born into a clan of warriors sworn to protect a King, Fjall carries a deep scar within, the death of a loved one who fell in battle trying to save him.”

It continued: “A scar that won’t let him settle, or make peace with himself or the world around him. In his quest for redemption, Fjall will find himself fighting beside the most unlikely of allies as he carves a path of vengeance across a continent in turmoil.”

The Witcher: Blood Origin has cast Laurence O’Fuarain as Fjall. Born into a clan of warriors sworn to protect a King, Fjall carries a deep scar within, the death of a loved one who fell in battle trying to save him… pic.twitter.com/nGv1dPk5ny

How many seasons of The Witcher will there be?

Netflix are spoiled for choice as far as source material goes. Apart from the series of short stories and novels, there are multiple video games which added side-quests and plot points to the franchise’s already-sprawling lore. So there’s no chance of showrunner Lauren Schmidt Hissrich running out of ideas for new episodes.

Asked by NME how many series she’s hoping to make, Schmidt Hissrich replied: “I’ve been quoted saying seven and 20, but basically, I will write this series as long as one: the source material holds out. But two: as long as audiences are interested in watching it.”

The Witcher season 2 plot: what’s going to happen in the new episodes?

Cast and crew are keeping tight-lipped about future adventures, but the less-vigilant stars have been unable to keep schtum entirely…

Executive producer Tomek Bagiński told NME that fans shouldn’t worry if they were confused by season one’s uneven timelines. Season two, he said, would be much more “straightforward” now that Geralt, Ciri and Yennefer’s narratives have aligned.

“It’s more streamlined because all the three storylines are now in the same timeline,” said Bagiński. “So I think it makes it a little more straightforward, but in a very good sense. I think it will be a very strong season. We also learned so much on the first one about the world, the characters and about what story we wanted to tell.”

Fellow producer Schmidt Hissrich teased the “different” approach they are taking on the new episodes.

“Season one is all about world set-up,” she said. “It’s making sure that you understand The Continent, where this world takes place. And that you also know and fall in love with these characters. Season two then allows us to have a little more focused storytelling. The story, Tomek can tell you, goer fast and wild. It’s got a lot of drive to it.”

Star Allan has also expressed hope that Ciri will get to see more action in season 2, telling NME that she wants to “fight” more.

“Absolutely,” she said. “I didn’t do any fights in this. I’m usually running from the action, running away. Less running [in season 2], more actually confronting.”

Schmidt Hissrich also revealed how season 2 could nod to the books, when a fan on a Reddit AMA asked about the potential for “queer representation next season”, taking stock of the subtext in Andrzej Sapkowski’s books.

“One of my favorite things about the books is that they are full of subversion,” the head writer said, before adding: “Yes, we’re gonna represent.”

I can’t wait to dig deeper into Cahir and Fringilla in S2… who they are, why Nilfgaard is important to them, and where they’ll go from here…. it’s one of my favorite parts of the new season. #QuarantineWatchParty #TheWitcher

“Who they are, why Nilfgaard is important to them, and where they’ll go from here….it’s one of my favorite parts of the new season,” Schmidt Hissrich said on Twitter.

Schmidt Hissrich has also teased how Geralt and Ciri will “change and shift each other” in season 2 now that they have finally met.

“What I think is really fun about Geralt and Ciri is they are the most unexpected family you can imagine,” she told The Wrap. “You have a witcher whose sole job is to kill things for money and you have a little girl who is trying to escape her past and it’s like, how do they come together?

“And now we get to throw that all in a blender and see what happens when two people who are completely different have to be forced together in circumstances. And I think it’s really fun. It’s not always pretty. They will argue. They will fight.

“It will be two strangers coming together for the first time and being told, ‘Nope, you’re gonna be together forever.’ I think that their growth together into being a father and daughter is one of my favorite parts of the series.

Schmidt Hissrich also confirmed that the second season of The Witcher would be impacted by the coronavirus lockdown, without giving too much detail. “It’s going to impact story. It will have to,” she said to The Wrap. “But one of the best things about being a writer on set is that I’m there to make those changes as we need them.”

‘The Witcher’ season one is streaming on Netflix now