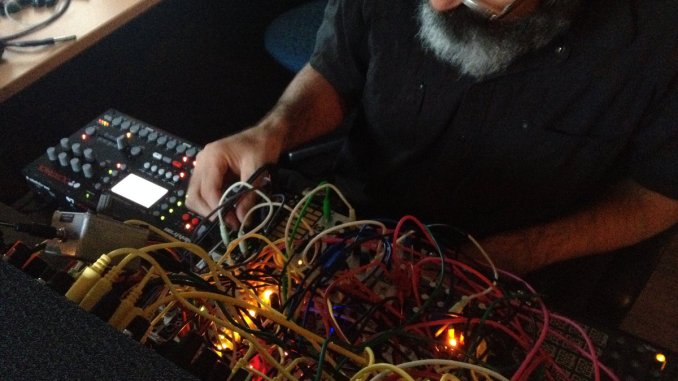 If you enjoyed your teenage years in the 2000s (hey, millennials), you probably sent a chain email or two. You know the game: Forward this email to your best friend or you’ll both be haunted 4eva!

Well before emails, there were drawings. Artists used to play a parlour game called Exquisite Corpse in which they’d start a drawing, and pass it along unfinished. At the end of the chain, they’d look at the result: a surrealist masterpiece.

Fast-forward to the 21st Century and a group of adventurous South Australian composers have captured the spirit of this game in their music project Exquisite Corpse.

One composer would start the chain with a series of notes and instruments, then others would follow — only allowed to hear 30 seconds of the music that came before.

In this interview, we chat with two composers along the chain of #1/B.

Experimental and improvisational artist Adam (pictured below) composed the opening and conclusion. Violinist, violist, and pianist Belinda was second along in the chain, and left inspiration for the next composer along the way.

At the time of this interview, no composer has heard the final compositions in full. Here’s how it worked.

Adam, you’ve had a pretty interesting role in the Exquisite Corpse, having written the opening and closing of album #1/B. First up, I’d like to know how you began. What did you make of the [fun] responsibility of setting the tone for the composers to come?

I started my composition inspired by the origin of the Exquisite Corpse, where it started as a visual arts medium during the surrealist movement. I compared it to doing an abstract oil painting, where paint is added and then parts of it are modified or removed to reveal new and old layers.

I started with an improvisational piece on a modular synth. I was then inspired to create traditional parts in response to that recording.

I then proceeded to remove elements of the original recording to reveal the acoustic instruments it inspired.
The tone I wanted to set for the following composers was one of total surprise, and hopefully inspiration to create something truly unique. I didn’t want it to be genre-based at all.

So, on a compositional level, what did you set up for the next artist?

I didn’t necessarily want to set them up for anything in particular as far as tonal centres and metres are concerned, but more to set an emotional atmosphere with a variety of musical options to choose from.

For this, I harmonically structured the end section to be somewhat ambiguous by employing a smeared tone cluster in the ‘melody’ against two static drone notes.

Rhythmically, I played the percussive element in a free non-metered manner so it didn’t line up to the grid, so it left the tempo also open to interpretation.

The emotional atmosphere emerges from that glissando tone cluster, the deep cinematic yet primal percussion and the use of strings.

I also didn’t want to drop the next composer into total musical chaos with nothing to latch onto. I did this by arranging the end section with only traditional instrumentation — no textural sound design elements — and set up a recurring harmonic foundation to springboard new ideas from.

What was your first impression when you heard the penultimate composition? It must have been strange to hear how the music had evolved right up to the point of your conclusion!

It was so interesting to hear where it ended up, and also what I was going to have to work with to complete the piece.

You only get to hear 20 seconds or so of the previous piece, so it’s more of a hint of what preceded it.

The music I heard was a great springboard for me to continue on from, and I really enjoyed what I heard.

How did you honour the beginning when composing the end?

I wanted to honour the beginning by complementing it in an opposing manner conceptually, so I started writing for traditional instruments a part at a time. I then ‘painted over’ the lead string part with a ‘string’ improvisation on the modular synth. I did this whilst the original string part was muted, and the modular synth became the main string part.

The two were blended together near the end, which created a lovely organic interplay due to the chance harmony.

It was also important to honour the piece I was continuing on from, so I sampled a section from it and looped it as a rhythmic element and for harmonic inspiration.

I also wanted the end piece to bring the listener home with a soothing resolve as a reward for what I can only assume was a hell of a ride to get there!

You haven’t yet heard the final work! What are you expecting?

Hard to say, to be honest! I’m very familiar with most of the artists involved, and everyone is from vastly different musical backgrounds. So it’s going to be interesting to hear the creative interplay between each piece, and if it’s inspired everyone to write new musical ideas they haven’t written before.

It’s definitely going to be an eclectic mix, and a fun listen full of twists and turns!

What has this concept taught you about composition?

I’m a huge fan of any concepts that force creativity, and I also love collaborations, so I was very excited to be a part of this.

Collaborations tend to push you into new territories you may not have explored before, whether it’s musically or even in a disciplinary manner. This concept was definitely a fun one and, being the first and last composer, it feels like being the first in line for the musical equivalent of the telephone game, waiting for an unexpected outcome at the end.

The other great thing about this concept is the forced limitation on the duration and set starting point you are given. This helps you write efficiently as you have to create from the initial starting point given to you, yet still create all the emotion, concepts, and ideas you want to convey within that small timeframe. Being a film composer also, I view this as a valuable discipline to have.

Belinda, you were the first composer to extend the chain of #1/B. How’d you use the end of the opening music to create your own — the second link?

I started by listening to Adam’s composition on a loop and writing down some words, and deciding on a sound palette.

That day, I had been on a beach walk and was listening to Romeo and Juliet, the ballet music by Prokofiev, one of my favourite pieces of all time.

There is a section in the ballet where the brass and winds play a massive chord and, when they stop, the strings are playing a beautiful soft chord that has been there the whole time, but is only audible once the brass stop.

The end of Adam’s composition reminded me of that string sound, which gave me an idea to play with a loud cacophony of some sort, with soft strings emerging from beneath.

When you’re working in such tight confines – a work already commenced – how do you express your own musical voice?

I am a violin player, so I feel like my voice is most often best represented by strings, classical instruments and, in this case, voice.

Adam’s piece actually finishes with string-type sounds, so it felt right to continue along that line.

In my section, I played live viola. I enjoy its richer tone, and it is fun to compose on an instrument you’re not as familiar with. It makes different melodies emerge.

I really enjoy experimenting with electronic sounds, samples, and filters, and wanted to include some subtle non-organic sounds to meld with what Adam had done before me, and what Iran may do after.

So what did you set up for Iran and why?

I leave the end of my section on a single sampled vocal note. I really wanted Iran to have plenty of scope to take the piece in any and every direction possible.

So Belinda, what do you reckon the final work will sound like?

I actually have no idea! At a guess, some sections will link together and sound cohesive and homogeneous, like a ‘happy accident’, and some will be more contrasting.

At the end of the day, what have you learnt from this game?

I have learnt that having a starting point from someone else actually makes the writing process easier for me. My ideas spark much quicker when I work from an existing sound.

I really enjoy collaborative composition, and being in the company of such great artists, there is a real sense of freedom. I felt like I didn’t have to deliver any particular type of style because our styles are already so different.

Exquisite Corpse is a collaboration between Creative Original Music Adelaide and Nexus Arts. It launches on July 12 at the Wheatsheaf Hotel, after which you’ll be able to hear the music on bandcamp.

If you like, you can shout Steph a coffee for volunteering her time for Australian arts journalism. No amount too much or little 🙂