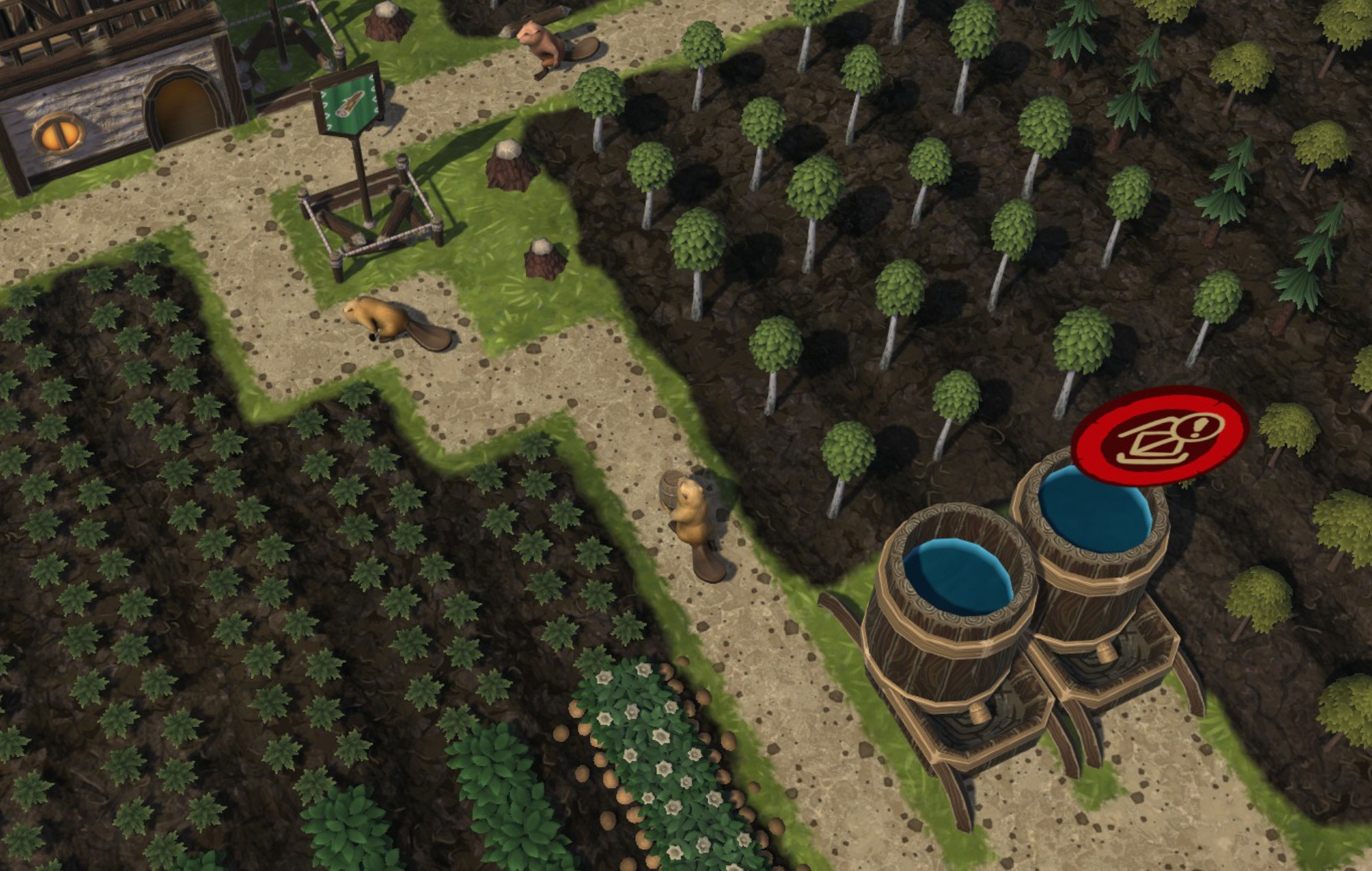 I embarked on my Timberborn journey with no knowledge of the game. The only tool I brought was my love of Satisfactory and the hope that some of those skills were transferable. There is one significant difference between the two games, though. In Satisfactory, if a machine is unsupplied with resources, it turns off for a bit. In Timberborn, if a beaver is unsupplied with resources it turns off… forever.

I established Beavertown and followed the highly minimal tutorial to ensure that my furry labourers had water, food, and construction supplies. It wasn’t long before they had established agriculture and begun mass housing initiatives. Unemployment was at an all-time low. Unfortunately, this was because there weren’t enough beavers for all the jobs that needed doing. This led me to spend a handful of in-game days shouting at my beavers to get funky and make me some new workers. Then a different kind of dry season came.

The main threats to your colony don’t come from hostile forces. Instead, the true foe is that absolute bastard: nature. As the days progress, each cycle ends with a dry season. A drought will fall upon the land, and the river will stop flowing. As the water level drops, the ground dries out; crops die, water stores run low. The beavers that survive the famines will learn from this, so I constructed the Prof Beaverson memorial dam, named in honour of a recently deceased inventor beaver.

Sadly, the Prof Beaverson memorial dam was not a hydroelectric dam, and power is needed to run lumbermills and other vital structures. Power isn’t a problem when the river is flowing, and water wheels provide plentiful energy. But during a drought, they won’t run. I had no power and a considerable number of unemployed beavers. It took no time to set up the beaver power generator system, an array of wheels that harness power from beavers, which I installed a tasteful distance from the prying eyes of my – mostly – socialist beaver empire.

When things were going well, I made a terrible discovery. Each cycle of the seasons brings with it a longer dry season. I had not prepared for this. The reservoir behind the dam ran dry. One hundred icons appeared above my beavers, telling me they needed water. But the dry season was coming to an end. I just had to avoid too many deaths before the water returned. I renamed the unemployed beavers in my colony: acceptable casualties.

Only two beavers died during the drought; the water returned and satisfied my colonies thirst. Then, there was the famine. After so many crops failed during the dry season, Beavertown’s stocks of berries, carrots, and grilled potatoes had run empty. Much like the post-Brexit Britain, we were running short of just about everything. Beavers died in droves, and the only positive was that beaver corpses decompose in moments, as there were no healthy beavers left to dig a mass grave. Eventually, the water returned, but it was too late. Every beaver had died, and the colony was a ghost town. A nice side effect was that the emergency flood gate had caused the river to breach its banks and create a beautiful lake.

I hadn’t yet begun harvesting metal for more complex construction, but judging from the tech tree, that was all that remained for me. Timberborn follows a cycle of expansion and survival but at a very leisurely pace. It takes a while for construction projects to reach completion, and gameplay has average actions per minute of one. Establishing a colony with multiple districts to supply and build monuments appears to be the end game, but different maps and beaver factions create fresh challenges and different playstyles.

The game flows at a lovely pace that offers plenty of opportunities to sit back and watch your beaver ant farm working through its tasks. Then, there’s a drought warning. All hell breaks loose as you realise the floodgate project is only half done and the wheat fields have barely recovered from the last draught. This mix of chilled building and stressful problem solving is the reason Timberborn is worth playing, even at this early stage.