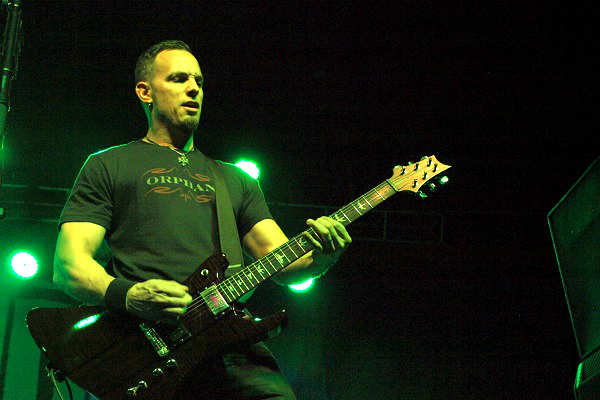 Tremonti has debuted a live music video for “A World Away,” a song off the band’s 2021 album, “Marching in Time”

After more than a year off the road due to the worldwide pandemic, Mark Tremonti and his band Tremonti will be heading on tour in support of the band’s new studio album, “Marching in Time.” Now, Tremonti is teasing the run with a new live video for their song “A World Away,” which will appear on the album.

The new clip shows the band performing the pummeling new tune, which features thick riffing and Tremonti’s strong vocals, on a stage that goes from dark to blue wash to bright stage lighting. The dynamic performance and colorful lighting fit the songs heavy, dramatic feel. Watch the full video below.

“A World Away” is the opening track on “Marching in Time,” which arrives Sept. 24 via Napalm Records. As for tour dates, the band will hit the road starting Friday (Sept. 3) at Rocklahoma in Pryor, Oklahoma. The band has two tours on the way: one with Sevendust and Lydia Can’t Breathe, and the other with Daughtry, Sevendust and Travis Bracht. As of right now, the group’s 2021 schedule will wrap up in mid-December on the Daughtry run.

“Marching in Time” was produced by Michael “Elvis” Baskette, who regularly serves as the producer for Tremonti’s other band, Alter Bridge, as well as for Alter Bridge frontman Myles Kennedy. The theme of “Marching in Tim” draws from “current events from the last year to form the basis of each song,” according to a statement, and offers a “a reflective look at the world around us today.”

Speaking with Audio Ink Radio of the album’s title, “Marching in Time,” Tremonti said, “Usually, after I finish writing all the lyrics and putting the album together, I’ll look at song titles and individual lines to see if anything stands out that encompasses the vibe of the record. When I looked though it, it definitely popped out.” Check back for Audio Ink Radio’s full interview with Tremonti next week.