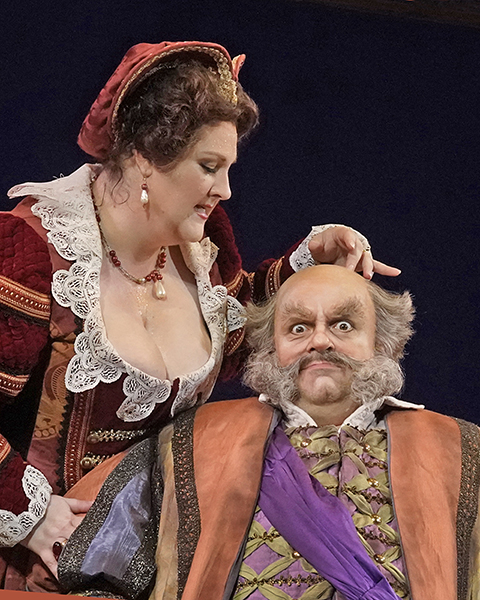 If a more delightful way of enjoying opera than at a vivid and lively performance of Verdi’s Falstaff exists, I would be hard put to name it, though of course other comic operas reach equally high levels of musical quality, dramatic richness, and a deep understanding of human foibles—Mozart’s Marriage of Figaro, Rossini’s Barber of Seville, and a couple of Donizetti’s to name a few. But as lovely and charming (and, especially in the case of Mozart, humane) as these operas are, none of them moves with the mercurial speed of Falstaff from beginning to end—so fast, indeed, that Verdi makes almost no time for arias, the part that most listeners expect and cherish. The leading characters in Falstaff do have wonderful, but brief, effusions of melody soaring out of the high jinks before blending again with the lightning-fast energy of the whole.

The current production of Falstaff on offer from the Berkshire Opera Festival evoked cheers and laughter at the first performance on Saturday afternoon. The following blended qualities made for a memorable event: A splendid cast, singing and acting with full commitment; active stage direction from Joshua Major, capturing the varied characterizations of the chaste and the scoundrelly personages, as well as an athletic, comic physicality not always seen in opera; Brian Garman’s tightly controlled direction of the orchestra, which had many challenges from the sheer speed of the tempi and its challenging link between the pit and the stage; and Cori Ellison’s sprightly translation for the supertitles that made Arrigo Boito’s witty Italian libretto immediately accessible to the audience, often capturing jokes lost in translation that generated genuine laughter—all of these elements made for a delicious experience throughout.

The miracle of Verdi’s last opera is that he composed this, his first successful comedy, as he was approaching the age of 80, yet it is so animated that one is tempted to think it the work of a much younger man, except that every moment and ever bar of music bespeaks a lifetime of experience in the theater.  He had already announced his retirement over 20 years earlier after completing Aida.  Happily a younger composer, the intellectual Arrigo Boito, offered his libretto based on Shakespeare’s “Othello.” Verdi recognized it as the finest libretto he had ever seen, and found himself lured back into the opera house 13 years later. Verdi adored Shakespeare: he had already composed a Macbeth, and he considered for many years a King Lear that never took shape. But Otello experienced a great success, and he retired once again at 74. Then, six years later, Boito slyly fired up his attitude of self-satisfaction once more.

Falstaff resulted as a three-act opera with two compact, varied scenes per act. (The Berkshire Opera production took just one intermission, at the end of Act II, thereby shortening the running time to 160 minutes rather than almost three hours.) The first scene of each act takes place at the Garter Inn, where the fat, aging knight Sir John Falstaff—a man of large appetites and a nearly empty purse—lives. The Romanian-born baritone Sebastian Catana makes his Falstaff a boastful, dishonest knight attempting to persuade his friends and those around him that he is a worthy, noble character. Yet he desperately needs some income; his plan is to seduce two attractive married women, both of whom hold the key to the family strongbox. He argues with his boon companions, Pistol and Bardolph (Jeremy Harr and Max Jacob Zander), who not only carry their vocal parts well, but get involved in pratfalls and horseplay with Falstaff. They refuse to deliver such immoral messages.

The second scene of each act involves the entire cast in plotting and succeeding at humiliating the arrogant Falstaff for his boastful pride and his planned seductions. First the two “merry wives” Alice (Tamara Wilson) and Meg (Joanne Evans), who are good friends, show one another the letter each has gotten, proposing a romantic tryst. At first they find the letters a joke, but when they realize that both were written by the same man with the exact same wording, they are outraged and determine to teach Falstaff a lesson. In this they are joined by Alice’s daughter Nanetta (Jasmine Habersham) and their middle-aged friend Mistress Quickly (Alissa Anderson). All four women make an excellent plotting team, filled with high spirits as they develop their plan.

As the women leave, a group of men storms in, led by Alice’s jealous husband Ford (Thomas Glass) accompanied by Bardolph and Pistol, who inform him of Fastaff’s plan. He is accompanied by the elderly Dr. Caius (Lucas Levy), to whom he plans to marry Nanetta, and young Fenton (Jonas Hacker), whom Nanetta loves. The men’s group is outraged at what Ford thinks his wife is up to, and the women’s group is equally upset at Falstaff’s behavior. As they sweep back and forth across the stage, Fenton and Nanetta find an opportunity to detach themselves from the older people and to indulge in amusing, if hasty, love play. Boito has assembled images from the classic love poetry of Italy, drawn from Petrarch’s sonnets (which is equally appropriate for Shakespeare, since these images were taken over fully by English poets). The lovemaking is light-hearted and quicksilver as the rest of the opera. When the return of others forces them to part, they serenade one another briefly with two exceptionally lovely phrases that Verdi brings back in each act.  Boito found the two poetic lines the lovers sing in Boccaccio’s Decameron (second day, seventh story):  Fenton; sings, “Bocca baciata non perde ventura.” (“A mouth that is kissed does not lose its good fortune”), and Nanetta replies, “Anzi rinnova, come fa la luna” (“Rather, it renews itself, like the moon”). These two beautiful lines, and Verdi’s melody, provide a few brief moments of sweet love in the middle of the adults’ shenanigans.

The remainder of the opera involves the women inviting Falstaff to an “assignation” with Alice, who plans to frighten him by having her friends come in warning her (and the would-be lover) that her husband is coming home. Ford has met Falstaff under a pseudonym and astonishes him by asking him to seduce Alice Ford. The reason?  She is so pure and chaste that I could have no luck with her, he says. But you, an accomplished seducer can win her, so I will have a chance. Falstaff has been hooked by the wives’ plot, and he assures the stranger that Alice will be in his arms within the hour. Ford is shaken and angered at this news, but he plays along. He interrupts the assignation by hunting through the house for the interloper. The scene is the wildest and perhaps the funniest in the entire opera: the women are prepared for Falstaff, but not for the arrival of the men hunting him. The action is nonstop with the ladies trying to hide Falstaff and the men trying to find him. During the hullaballoo, Fenton and Nanetta find another place to hide and kiss, but Ford, thinking it is Falstaff, gathers his friends and discovers—his daughter, with the man he does not want her to marry. And the act ends as Falstaff, hiding in a bag of dirty laundry (“I’m suffocating!” he cries as the men hunt for him) is lifted by Alice’s servants to the window and dumped into the Thames.

There is still another act to go. Ford now believes his wife is honest and that his jealousy has no reason to exist. But everyone wants to play one more trick on Falstaff to get him to change his ways. Plotting is still afoot, but now it is marital. Ford plots to get Nanetta married to Dr. Caius during their prank on Falstaff, while Alice is determined to help Nanetta marry the man she loves. The closing scene is again deliciously funny with Catana’s Falstaff trying to preserve some sense of self-esteem, even when he learns that he has been duped again. But Ford, too, gets duped, by his wife, when he realizes that his plan for Nanetta’s wedding failed. In the end, he says, the whole world is a joke—and everyone is a buffoon. And to spread this message abroad, Verdi ends with a general fugue, first declaring that everyone in the story has proved a buffoon, then pointing at the audience to include every listener into the melting pot of jesters.

From beginning to end, we enjoyed unending pleasure. The two young lovers sang with a sweet purity that elevated their lovemaking above the jokes and pranks going on everywhere else. Ford’s anger and fear of being cuckolded rose to near violence in the first part but softened to good humor when Falstaff pointed out his own folly at the end. The two wives sang and acted with wonderful wittiness in their plot against Falstaff. Their friend Mistress Quickly, who carried their messages to Falstaff and pulled the wool over his eyes made herself a great participant in plotting. With all of my chortling and quiet guffaws, and what with my mask, my glasses kept getting fogged up. But little matter. I was in comic opera heaven—and, with its chuckles, outright laughter and lengthy applause, the audience joined me there.

The run continues Tuesday, August 24th , and Friday, August 27th, at 7:30pm, Mahaiwe Theater in Great Barrington/ Everyone must mask show an ID at the entrance.