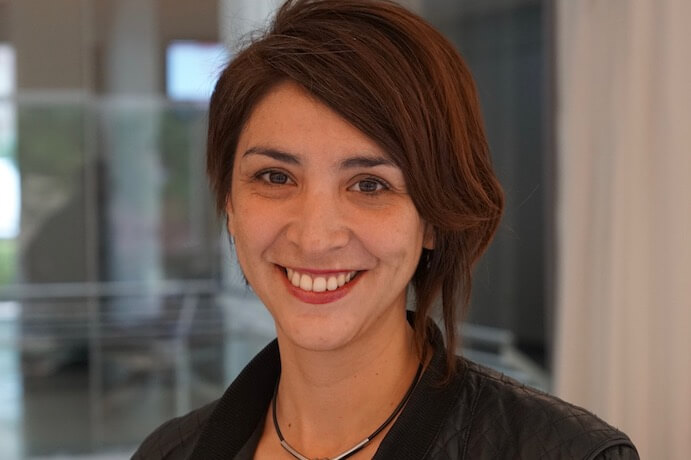 Much like something out of Godfrey Reggio’s 1982 experimental film Koyaanisqatsi, Carolina Heredia’s performance of Dejate Caer uses mesmerizing slow-motion video played in reverse. Projections of firework explosions pull themselves back together with an unnatural elastic resistance as live violin and pre-recorded samples created a layered, mediative dialogue.

Translating to “let yourself fall,” Dejate Caer for solo violin and electronics is inspired by a poem from Alejandra Pizarnik’s Extracción de la piedra de la locura. This new video originally premiered in May 2021 at a virtual concert on the Pendulum New Music series at the University of Colorado, Bolder. Recorded at the University of Missouri’s Sinquefield Music Center, Carolina’s performance adds on-site projections and post-production video layering to the original work. Here’s what Carolina had to say about Dejate Caer:

I composed this piece in 2012, while I was a student at the University of Michigan. It was the first electronic work I wrote and produced entirely by myself. My process for composing this piece was completely different than what I had done before. I fell in love with the medium and spent dozens of hours working at the electronic music studio, mostly late at night…I believe it was a few months later, that same year, when my former violin professor James Lyon was visiting Ann Arbor and recorded the very first version of the complete work. I had shown him the piece and thought his warm, expressive sound would be the perfect one. Luckily, he liked the work and agreed to perform it on a few concerts in town and recorded it during his visit.

My video performance of Dejate Caer…was a way of escaping the flatness of online prerecorded concerts in the traditional manner, something that we have had to do as musicians (for way too long at this point) to not starve our souls since the pandemic made live music-making impossible. At the same time, I’m finding myself comfortable on stage performing more recently. I have a background in violin, dance, and theater. I thought this was a good opportunity to explore more the performative side of me and to play with projection design and video production.

Carolina Heredia is a composer of acoustic and electronic Classical New Music, as well as an Intermedia producer. Her works have been commissioned and performed in the United States, South America, and Europe by several esteemed musicians and ensembles, including JACK Quartet, Alarm Will Sound, Aspen Contemporary Ensemble, Oberlin New Music Ensemble, Alex Fiterstein, Derek Bermel, Tesla Quartet, and Khemia Ensemble, among others. Her music has been featured at the SONIC Festival NYC, Aspen Music Festival and School, Bowling Green New Music Festival, the Mizzou International Composers Festival, SEAMUS, Strange Beautiful Music, among others. Heredia’s awards include the 2015 Fromm Music Foundation Commission, 2018 International New Music Competition John Corigliano Grand Prize, the 2019 Lake George Music Composition Competition, and the 2020 Barlow Endowment General Commission. Carolina holds a Doctorate in Music Composition degree and was a Research Fellow for the Institute of Humanities at the University of Michigan. She was a 2017-18 postdoctoral fellow at the University of Missouri School of Music where she currently holds the position of Assistant Professor in Music Composition and Assistant Director of the Mizzou New Music Initiative.