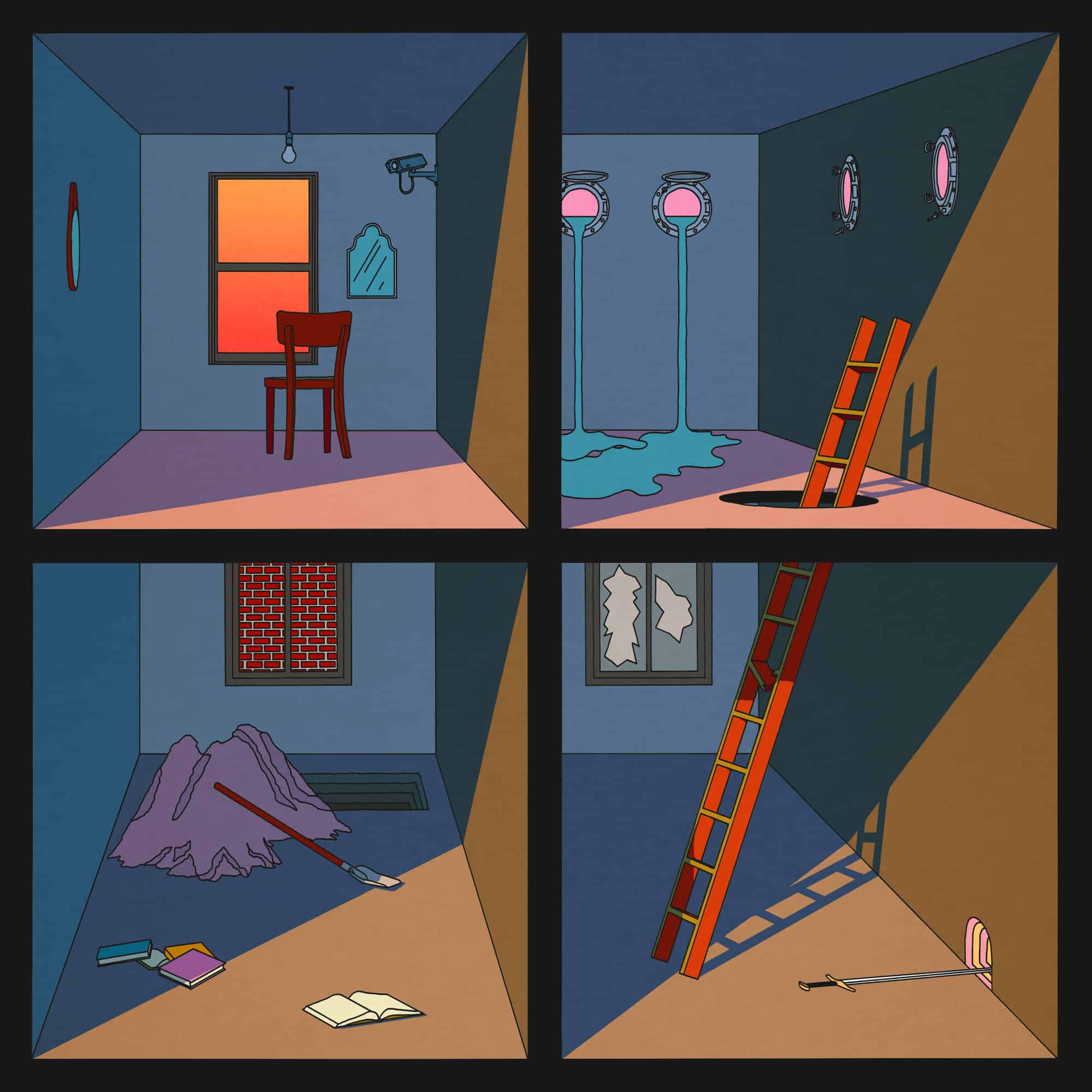 For their latest album, Enjoy the View, Scottish rockers, We Were Promised Jetpacks, give us an unexpected soundscape.  While there’s certainly cues to the band’s earlier works, Enjoy the View eschews many of the group’s in your face post-punk influences.  Written during the peak of pandemic uncertainty—early spring of 2020– We Were Promised Jetpacks chose reflection and even some hope over angst and fury. Perhaps inspired by the struggle of lockdown, the record also feels like it was designed to be played outdoors.  The songs often spark visions of festival crowds on blankets soaking in the sun along with arcing guitar cries.

From its start with, “Not Me Anymore,” it’s clear that the band had a different concept for this album.  The song blends pop and classic R&B elements as lead vocalist Adam Thompson welcomes us to their updated sound. While the dream-pop influences will be noted on later songs, the R&B sway to, “Not Me Anymore,” makes it distinctly different than the remaining tracks.

Next, we’re given a duo of songs that arguably make up Enjoy The View’s strongest offerings.  First up is the faster moving, “Fat Chance.” Here we get light touches of post-punk mixed with a heavily pop-influenced drumbeat.  The track not only feels upbeat, it caries a clear message of hope in its chorus: “I thought I had a fat chance/Maybe one in millions/Did a complete 180/Now I’m going the right way.”  The following, “All That Glittered,” is the perfect companion piece with its darker sound.  Big guitars and heavy cymbal crashes make this a real rock number.  However, the underlying drum track and Thompson’s bright delivery of the lyrics keep it light enough to fit within Enjoy the View’s overall motif.

The next three songs further highlight the sonic exploration of the record. “Don’t Hold Your Breath,” mixes 80’s rock influences with a feisty drum beat.  They surprisingly slipped a dance-worthy song into a rock album.  This is followed by the slower, contemplative, “What I Know Now.”  This track encapsulates the pensive reflection that ensconced us during the forced isolation of the pandemic.  Looking back on the end of a relationship, the lyrics and Thompson’s vocals come straight from the heart.  The last of this trio is the brighter, “If It Happens.” As the song builds, the vocals shift from spacy to intense; the guitar getting more urgent. One listen and you’ll hear why this song simply begs to be played at a music festival.

Fans who fell in love with the band for the fiery riffs of their anthem, “Quiet Little Voices,” will be surprised to wait all the way to track number nine to feel a similar blitz of guitar, drums, and punk inspired vocals. Arguably, this song could have been the perfect closing track of the album.  Not only does it inspire the listener to rock along to the driving beat, but it feels like a return to “normal.”  This is the track from Enjoy the View people will surely be looking for as club shows continue to return.  However, it fits well at the end of the record and doesn’t overshadow the rest of the album.

We Were Promised Jetpacks created a spacious album that flows with an art-rock feel—as if Pink Floyd dropped the psychedelia and made an indie rock album.  The result is a surprisingly beautiful and soothing collection of songs.

Listen to Enjoy the View on Spotify:

You can also purchase Enjoy the View and pick up some merch (including some cool vinyl LP and T-Shirt bundles!)

Connect with We Were Promised Jetpacks:

Catch We Were Promised Jetpacks on their rescheduled U.S. tour:

Featured photo of We Were Promised Jetpacks by: Euan Robertson