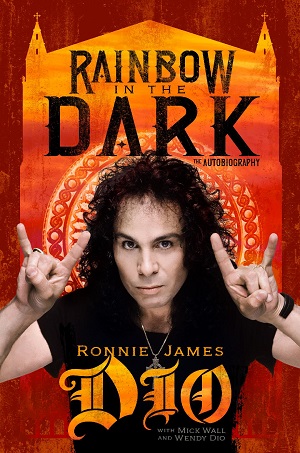 Wendy Dio joins Anne Erickson to discuss her late husband, Ronnie James Dio, and the “Rainbow in the Dark” memoir released in his honor

Ronnie James Dio is undeniably one of the greatest voices in metal music. From his work in Black Sabbath to Rainbow to his own prolific band Dio, Ronnie blessed the metal world with his powerful, operatic pipes right up until his untimely death in 2010 from cancer.

Now, the late musician’s wife, Wendy Dio, has teamed up with music biographer Mick Wall to bring some of Ronnie’s untold stories to life. The new biography, “Rainbow in the Dark,” honors the musician with a never-before-seen original manuscript, rare photos, new interviews and more. The book just debuted No. 12 on Publisher Weekly’s Hard Cover Non-Fiction bestseller tally and No. 11 on the Sunday Times bestseller list in the U.K.

Wendy spoke with Anne Erickson of Audio Ink Radio about the biography, what else is in the works to honor Ronnie and her favorite band with whom he was involved. Read the Wendy Dio interview below, listen via the YouTube player and hear it via the Audio Ink Radio show on Apple Podcasts here and Spotify here.

It was a big challenge. I talked about it for a long time. I wanted to finish the book, and the time was never right. Then, Ronnie’s good friend and journalist Mick Wall from the U.K. said, “Wendy it’s time we did it.” I said, “We need help.” So, Ronnie had written the book up until Rainbow, and then when he was sick, he had written and scribbled a bunch of notes on notepads and in his computer. I wanted the book to continue in Ronnie’s own words, so we took all the scribbles and notes and searched the archives for interviews he had done around that time and for what he was talking about and put it together with other memories I remember that was happening at those times in his life, and we completed the book.

On her favorite part of putting together the memoir

I think my favorite part was reading the part Ronnie had written, because there were some things there I didn’t even know about. I didn’t know he was such a bad boy when he was in his youth! I just different things in the book. I loved the photos that we picked. I didn’t want to use the usual rock ‘n’ roll band photos that people have seen a million times. I had to include some of those, of course, but I wanted to go in and put in some nice phots from our scrapbooks, which we did, and that was very bittersweet, emotionally, to look at those photos are remember the times we spent together in those photos.

On the personal side of Ronnie, when he wasn’t performing to thousands of metal fans

I hope they get to know Ronnie and how he was and that he wasn’t an overnight success. He really struggled to get to where he was. He had a lot of ups and downs in his life, and he was just a very human person. I think the stories he tells of his childhood and all the trials and tribulations he went through to get to where he was, the different bands and things- just see him as a human being and not a big rock star.

On the latest on Ronnie’s band, now called Dio Band

We’re going out again in March. (We’re) just going through a new stage set. We won’t be taking the hologram out this year. We’re working with the same company, Eyellusion, but with special effects. It will be film of Ronnie with the band, and we’re trying to work on that with some effects going on. It takes a long time and a lot of back and forth with that, but I think we’re very pleased with the stage set and what’s going on, and it will be a new set that we’re taking out in March all over the place. There are some albums being released with some bonus material. I’m in the vault right now and going through stuff and seeing if there’s any unreleased material that will be up to Ronnie’s standards to release.

There is some stuff- yes. Definitely. I’ve been looking at that. I’m working with Wyn Davis, who’s Ronnie’s engineer on that, to use his ears to see if these things are up to Ronnie’s standard to be able to put out or not… I knew there are three songs, yes. There is other stuff. There’s a lot of unreleased live stuff that was done in many different places, so it’s going through all that and updating it and making sure it doesn’t disintegrate, because some of this stuff is old and on a big two-inch reel, so we have to get it back up to today’s standards so it doesn’t disintegrate. So, I’m working on that right now.

Oh, hard question. I don’t know. I would say probably Sabbath… I remember the last part of his life, that he got back together with the guys as Heaven and Hell, and I think that was one of the things that I really, really am so pleased that he got to do that before he passed away, because he did love those guys and he loved playing with them. They were such amazing players. Everyone had to be absolutely on their toes to keep up with each other. You’ve got Tony Iommi, who’s the riff master of all guitar, and Geezer Bulter, one of the best bass players ever, and Vinny (Appice), the drum monster, with Ronnie, and all of them are such incredible musicians, and their music was just so amazing, and they were so happy with that last run around before Ronnie got sick.