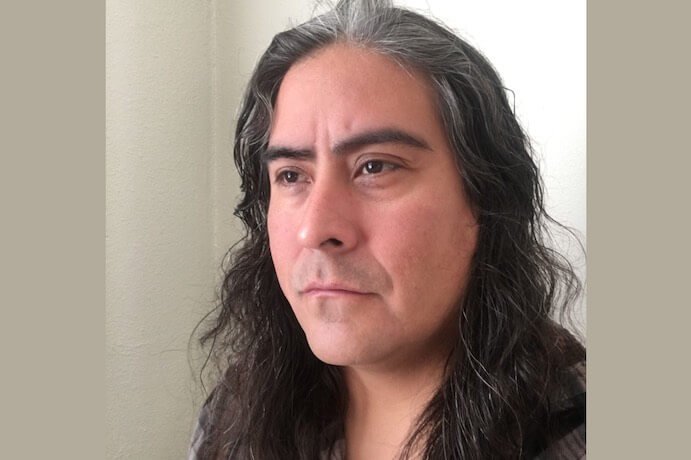 White People Killed Them, out now on the indie label SIGE Records, is an invigorating new recording that merges the substantial talents of composer and sound artist Raven Chacon, guitarist John Dieterich, and percussionist Marshall Trammell. Dieterich, who is perhaps best known for his work with avant-pop quartet Deerhoof, previously collaborated with Chacon on the duo’s 2017 LP Endlings. Chacon’s thumbprint marks a broad range of creative endeavors, including his activity as composer-in-residence with the Native American Composers Apprenticeship Program and a recent residency with the CCA Wattis Institute entitled Radio Coyote. Trammell’s work emerges from a pedagogical ideology that coalesces in his Music Research Strategies, a “performing-political education platform for embodied social justice vernacular, organizational strategy, and alternative infrastructure development.” White People Killed Them marks the first collaboration between the three.

Very little is included with the album to supplement the recorded content. The following inscription, found on the back of the LP sleeve, serves as the extent of the liner notes:

“We encourage surprise inventions and innovations towards erecting, maintaining, and the defending of democratic spaces (beyond the limits of the bandstand) in your community with other front line warriors.” Raven Chacon–Photo courtesy of the artist

Indeed, the material of White People Killed Them is generated in modes of open dialogue between the players. The creative process seeks to uncover a basis for what is unfolding and ascends toward the ever-evolving harmonization of diverse ideas in rhythm, color, sonority and technique. The democratic musical space modeled by the trio allows for all ideas to be heard and considered, forming a unified whole that does not trivialize any of its individual parts. It is in this manner that “front line warriors” in our communities may fight for positive change while seeking to preserve vulnerable traditions that depend upon safe, democratic spaces to subsist.

According to Dieterich, the project came together spontaneously in 2019 when the three happened to be together in New Mexico, where Chacon and Dieterich both reside. The work, which is released digitally and on a limited edition LP, consists of two, 21-minute improvisations entitled “Side A” and “Side B,” respectively. The project’s title (which doubles as the name of the band) was suggested by Trammell during the session and stuck. Even before the needle hits the groove, the phrase “White People Killed Them” leaps into the mind with provocative energy. In the absence of any clear context, there is an ambiguity to its potential meaning that challenges the listener to react. This reaction (as Dietrich suggested to me) inevitably manifests like the results of a Rorschach test, colored by what the listener has been conditioned to hear or see in it. The moving target of who “them” might indicate, the implication of a specific event, and whether the phrase looks to the past or the ongoing present — these questions all add depth. The music of the album unfolds in a mysterious and turbulent zone of engaging sonorities and haunted textures. Chacon’s electronics and Dieterich’s guitar establish a counterpoint that quickly melts together like candle wax in some dark and brooding grove. Trammell’s free and expressive rhythms punctuate the atmosphere with an ebb and flow of concepts in timing. In concert with the open-ended significance of the project’s name, the music only posits implications of meaning. These suggestions crystallize within the perception of the listener, like hearing voices emerge from the din of rushing water deep within a cave, or seeing familiar faces looking back at you from the fluttering static of a dead TV channel.

“Side A” takes shape gradually, following a series of proposals that advance and recede before synthesizing a wave-like drone that closes out the cut. “Side B” opens with lilting, pointillistic electronics and guitars that spread out across an expansive landscape that is at once beautiful and anxiety inducing. Of particular note is Trammell’s kinetic drum solo around the eight minute mark, underscored by optimistic tones from Chacon’s electronics. This section seems then to seep into the ground, making way for distant wailing, like sirens that instill a sense of dread; are they a warning to protect us, or are they being produced by the approaching danger? Textured droning passes overhead like weird, descending aircraft. There is an alien quality to the sounds, an existential invasion. Side B’s subtle and lengthy decrescendo reads like the passing of a weird parade; the departure of a macabre circus that is moving on to either scorch new earth or fertilize new ground.

White People Killed Them is exciting, compassionate, thoughtful, mysterious, and above all, engaging with almost hypnotic efficacy. The LP itself is packaged with elegant simplicity, featuring art direction by Trammell and designed by Faith Coloccia (co-founder of SIGE Records and experimental post-rock band Mamiffer). We will be lucky to hear from this excellent trio again in the future.