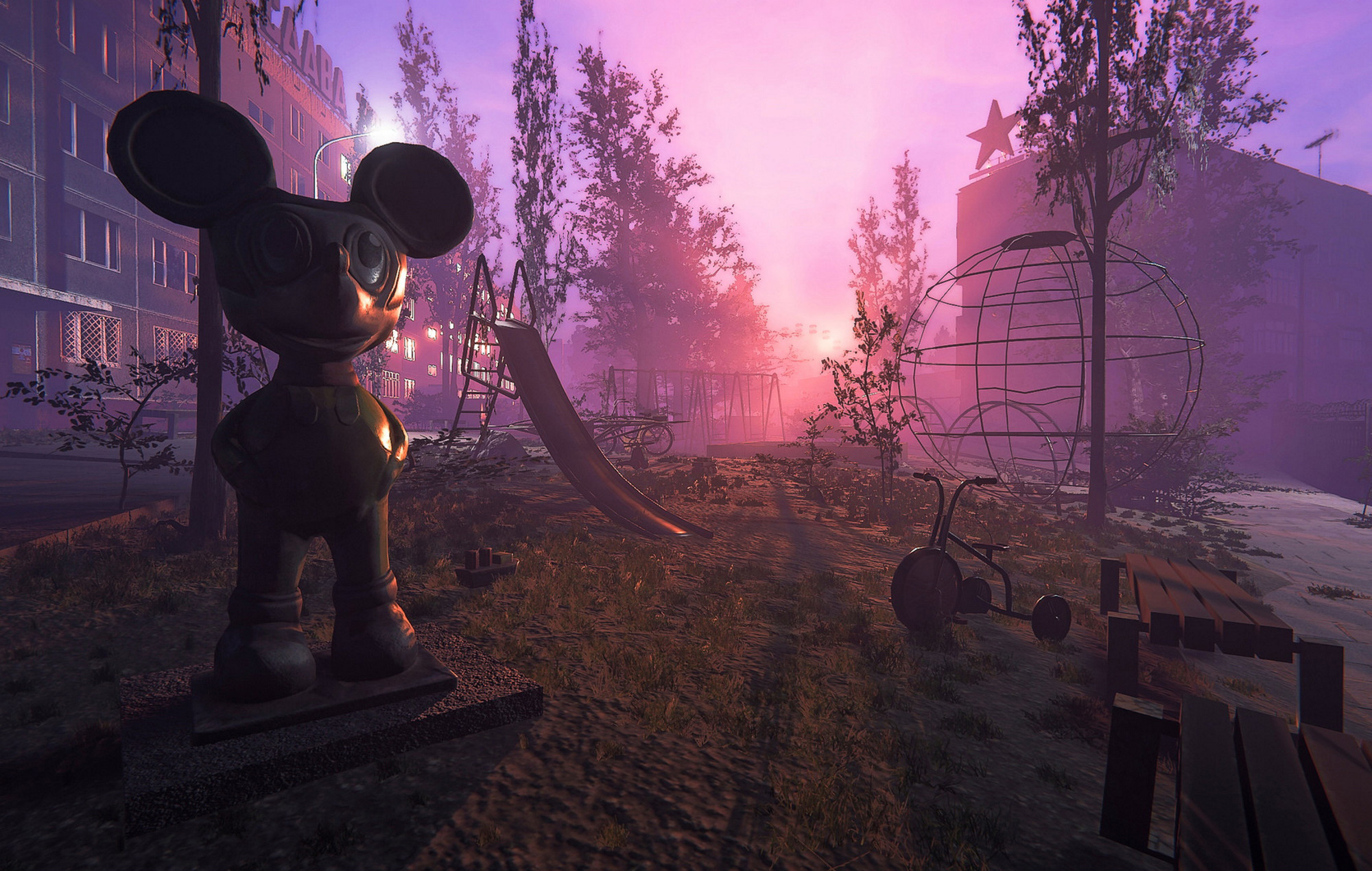 On Saturday 26, April 1986, Reactor Four of the Chernobyl Nuclear Power Plant went into meltdown. Contaminated nuclear material was released into the atmosphere for about ten days, traveling as far as western Europe and the UK. It became the worst nuclear disaster on record.

The stories about Chernobyl and the sense of mystery evoked by the exclusion zone have since been reflected in video games. At first, the area was only mentioned in passing, but as time went on it become the focus of games, such as in the S.T.A.L.K.E.R. series and the forthcoming Chernobylite. These games allow players to explore the Chernobyl Exclusion Zone, which includes the abandoned city of Pripyat and the colossal Duga radar facility. The heart of the exclusion zone is Chernobyl, where the remains of Reactor 4 lie encased in concrete and steel.

Investigations into the Chernobyl disaster determined that the meltdown occurred through safety warnings being ignored and poor reactor design. However, the Soviet Union’s delay in responding to Chernobyl, as well as the subsequent misinformation surrounding the incident, exacerbated the fallout.

There have been other nuclear incidents, such as the Kyshtym disaster in 1957 and the Fukushima Daiichi disaster only ten years ago. According to the International Nuclear Event Scale, only the Chernobyl and Fukushima Daiichi disasters have been classified as major accidents. However, Fukushima’s concrete and steel containment structure meant that the radiological and environmental harm was far less than Chernobyl.

The scale of what happened at Chernobyl has imprinted itself onto the global zeitgeist. Just like the Manhattan Project in the 1940s, Chernobyl has become a focal point for modern folklore and conspiracy theories. Such conspiracy theories have ranged from government meddling (both Russian and American) to UFOs assisting in the clean-up and the disaster being foretold by the ‘black bird of Chernobyl’.

“Chernobyl encapsulated the fear of nuclear technology, which encompassed several overlapping anxieties of the cold war,” explains Dr David Waldron, senior lecturer in History at the Federation University. “There was the technology itself, exemplified by the horrors of radiation poisoning from Hiroshima, and the legacy of secret, and often harmful nuclear testing. This was also magnified consistently through hundreds of films, novels and games.”

This emergent mythology has made Chernobyl a fertile ground for modern storytelling. One of the first games to be set within the Chernobyl exclusion zone was S.T.A.L.K.E.R., The developers GSC Game World found the events in Arkady and Boris Strugatsky’s classic Russian novella Roadside Picnic (later adapted into the 1979 film Stalker), were a natural fit within the Chernobyl Exclusion Zone.

Released between 2007 and 2010, each edition of S.T.A.L.K.E.R allowed players to explore the Chernobyl Exclusion Zone. It is set twenty years after a fictitious second Chernobyl disaster, which further contaminated the surrounding area with radiation. The premise is that this led to otherworldly changes in local fauna, flora and variations in the laws of physics.

Unlike many games, the setting of S.T.A.L.K.E.R. and other Chernobyl-based games is real. There is no need to make the area fantastical, as there is nowhere else like it on Earth. The zone has become a time capsule of a former global superpower, where Soviet symbolism adorns brutalist architecture as it is slowly subsumed by nature.

“The architecture is not very unique by their general style (Eastern-European buildings were almost identical in their look all around the Soviet Union), but the specific look and feel of the environment that has been abandoned in the Zone after the catastrophe – that’s something that you’ll not easily find anywhere else in the world,” says Artur Fojcik, Chernobylite Game Director at The Farm 51. “It’s a mix of industrial constructions related to the nuclear power plant and military facilities, attached to the peaceful and joyful living area of Pripyat city.”

The abandoned nature of the Exclusion Zone also makes it the perfect location for ghost stories. An air of mystery permeates the area, thanks to the myriad of urban legends that surround it. Pripyat is essentially a haunted mansion at a city scale. “I have a theory that ghost stories serve a function of commemorating problematic history that we are unwilling to come to terms with,” explains Waldron.

Chernobylite exudes the alluring combination of mystery and unease, which inspires people to explore abandoned places. The player takes on the role of a former Chernobyl employee, who is mourning the loss of a loved one in the disaster. Combining exploration with crafting mechanics, the character returns to the exclusion zone to search for their partner, whilst avoiding the Chernobylites.

Chernobylite came about following The Farm 51’s development of Chernobyl’s VR Project. We’ve been trying to utilise 3D-scanning technologies to create a virtual reality photorealistic environment based on real-world sceneries,” explains Wojciech Pazdur, Creative Director of Chernobylite at The Farm 51. “Chernobyl, as the exotic and dangerous place, was a very tempting subject.”

The 3D-scanning technique known as photogrammetry was key to immersing the player within the exclusion zone. This technique reconstructs a digital copy of a real object or location using hundreds, and sometimes thousands, of photos taken using specific cameras and lighting conditions. A laser scanning technique, sometimes using video footage captured with drones, was also used. “The more time you spend there, the more you feel that what really touches you is not a look of abandoned ruins or the invisible threat of radiation, but the stories of people who lived there and lost their happy lives due to some terrible accident,” says Fojcik.

However, not all of the games based on Chernobyl are steeped in fantasy. Chernobyl Liquidators Simulator seeks to recreate the events of the Chernobyl disaster from the perspective of the firefighters and civil defence troops (otherwise known as ‘liquidators’). It is a realistic take on the disaster and is set during the events themselves. Players are tasked with containing the radiation and saving lives. “The idea arose after watching the series on HBO: we found it an exciting story that can be shown in the way of the game,” explains Pawel Lipiec of Live Motion Games. “This is not a fantasy game. Here we enter the world that really existed, into real places and real stories.”

Unlike other games, where players have to face the threat of mutated creatures or supernatural anomalies, here the threats take the form of fires and radiation. This makes for a far grimmer, but realistic, portrayal of Chernobyl.

Chernobyl remains a defining moment in our society. So much recent history was determined that fateful day thirty-five years ago, whilst the unresolved mysteries surrounding the events have become catalysts for urban legends.

“The story of Chernobyl is the story of the end of an empire. Chernobyl Nuclear Power Plant was supposed to be the biggest facility of its kind in the Cold War era, even at the time of catastrophe there were construction works performed to build a new reactor blocks, cooling towers and all the infrastructure around,” concludes Pazdur. “Some historians say that the Chernobyl disaster was the beginning of the fall of communism too. If you connect it to the personal stories of people touched by the accident, the drastic change in the environment of a big part of Europe for years, and scientific and military experiments related to the situation, we have a big, epic picture of human race’s plot twist.”