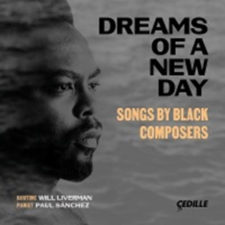 There are a number of recordings in the catalog featuring works by Black composers, but baritone Will Liverman and Cedille give us a unique and thought-provoking encounter not only with some first-rate music and performances, but also with equally important poetic texts that in various ways express the Black experience in America. While all the composers have their roots in the 20th century (only one was born in the 19th), most of the names likely won’t be familiar to most listeners. And interestingly, the best-known composer, Henry (Harry) Burleigh (also the earliest-born, in 1866) is represented here not by his well-loved and oft-performed settings of spirituals, but rather by a lesser-known (or even relatively unknown) set of original songs, Five Songs of Laurence Hope.

Many of the poetic texts are by two of the most revered voices of the 19th and 20th centuries, Paul Laurence Dunbar (1872-1906) and Langston Hughes (1902-1967), however there are also several modern contributions, such as H. Leslie Adams’ newly imagined Amazing Grace from 1992 that begins “Amazing Grace you fill my heart with song…”, and Shawn Okpebholo’s Two Black Churches (2020), whose second movement, The Rain, sets a poem written for this work by Marcus Amaker that tells of the 2015 shooting and killing of nine parishioners at the Mother Emanuel AME Church in Charleston, South Carolina.

The program begins with contemporary composer Damien Sneed’s I Dream a World, a Langston Hughes poem whose message of hopefulness and vision of a better, more just and compassionate future has been a long-time favorite of choral composers. The program ends with an account of a literal shattering of that dream: Will Liverman’s arrangement of Birmingham Sunday, ’60s folk legend Richard Fariña’s powerful 1964 song describing the horrific bombing of the 16th Street Baptist Church in 1963 that killed four young girls. That same story is recounted earlier in the first part of Okpebholo’s Two Black Churches; titled Ballad of Birmingham, this poem by Dudley Randall is an especially poignant scenario, imagining a mother allowing her little girl to go to church on that fateful Sunday, where she presumably would be safe, instead of where the girl wants to go: marching with others in the Birmingham streets “to make our country free”.

Among the other works on the program are Margaret Bonds’ (1913-1972) Three Dream Portraits, set to poems by Langston Hughes in 1959. Here, in different ways, the poet expresses, and the composer aptly realizes, the hopeful cry of Black Americans for true freedom, for desired and deserved recognition, summarized in the third song, “I, Too”, which begins, “I, too, sing America. I am the darker brother”, and ends “I, too, am America”. Robert Owens (1925-2017) chose five Hughes poems for his 1969 song cycle Mortal Storm, once describing the set as telling the stories of “the storms we as mortals face”. By that time Owens’ experiences with racism had driven him to leave the U.S. to live in Europe, and indeed these songs, highlighted by “Genius Child” (“Nobody loves a genius child”) reflect nothing of the optimistic dreams or sincere hopes in some of the poet’s other works. And neither does the music–intense and passionately expressive.

The music throughout is as varied as you might expect with eight different composers spanning the better part of a century. And yet it all maintains an accessibility and expressive power directly arising from the subjects and the deeply human emotions and experiences elucidated in the texts. It would be difficult to imagine a more eloquent or profoundly convincing advocate than Liverman for these songs–eloquent in his vocal mastery; convincing in his communicative skill and absolute belief in every word.

Sometimes he allows his powerful baritone to overwhelm with operatic intensity a passage that would be more effective with a less forceful approach; but then he frequently erases our memory of those moments with some incredibly sweet, tender, affectingly sensuous singing, often at a song’s end, where the notes just float with heartbreaking beauty. Liverman’s range–dynamically and in terms of articulation and expressive nuance–is certainly impressive. And pianist Paul Sánchez helps make it all come together with his equally impressive communicative skill with some very demanding piano parts. Louise Toppin’s excellent, detailed notes complete a project that’s not only welcome and important for our time, but for all time.

Album Title: Dreams Of A New Day–Songs By Black Composers