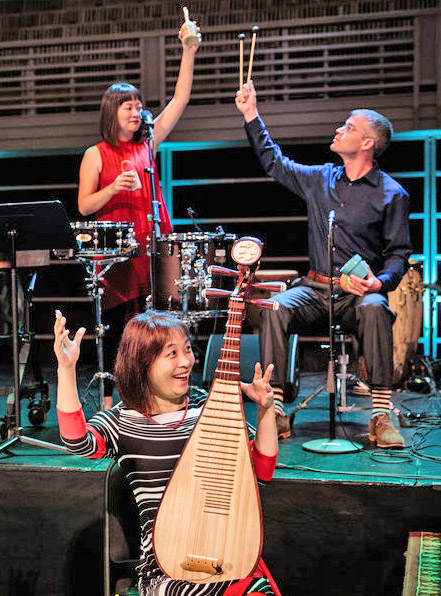 A Hawaiian’s ukulele rendering of the Japanese folk song Sakura stood out as the lone highlight of Silkroad’s Global Musician Workshop Online Performance Festival. It live-streamed Friday night from the New England Conservatory of Music. A solo violin in traditional music stood out as did brief Middle Eastern vocal and Celtic harp improvs, among a dozen or so collaborative efforts by faculty. Some 70 viewers had tuned into the workshop that appeared to be just that and not much more.

Who was that Middle Eastern vocalist?  Kuisma, I believe, was that solo violinist. Where was she from? What was the piece she played? It was barely possible to catch the names of the performers and titles of the pieces. Such information passed by quickly, most of it spoken Also, only at times could I clearly make out whether the musicians were improvising. Perhaps most disappointing about the hour and a quarter or so of Silkroad’s Global Musician Workshop Online Performance was how little it instructed.

Good videography did inform, however, with simple closeups of those soloing and with wider anglings of the various GMF ensembles.

Director and host Mike Block showed no shyness, bobbing about as he performed with a cello strapped to his body. While going well beyond the do-re-mi-fa-sol-la-si-do musical alphabet, Block kept his expressive footing on Western ground. And this was often true of others involved in their own global touring. Some would have these explorations as mashups.

What were the workshops about? “Block and faculty artists, including musicians from the Silkroad Ensemble and their colleagues, lead a week-long professional development program that includes group workshops, play-along jam sessions, panel discussions, unique topic-based elective classes, and more—all representing a wide range of backgrounds and traditions from around the world.”

The ukulele on Sakura sounded true. The Japanese “joy of sound” intimately mingled with Hawaiian music making. Unfortunately, the player’s name eluded me. I was able, though, to catch his words after a performance of melded languages. His passion for the instrument began at an early age. His mother taught him.  He asserted that “we all feel the same emotions” that music is a universal language. Many an ethnomusicologist of recent times would agree.

Fiddler Kuisma also streamed from elsewhere, sitting barefoot in front of a window. An inset showed her with a headset in a second fiddler’s role, further to create a polyphonic violin. Tradition met electronics that danced and energized.

A composition by the percussionist entitled “9 to 5” took on a Turkish bent, the 9 applying to a rhythm of 2+2+2+3.  “Way East of Orleans” looked to the Jewish tradition of Klezmer and America’s indigenous Blues, disgorging a slow and plodding mix.

What we did learn about the weeklong workshops for professional development, with 169 participants and 45 instruments from 30 countries, was impressive, yet we wondered what Friday evening’s performance might have been like had there been more workshop participants, instead of faculty.

David Patterson, Professor of Music and former Chair of the Performing Arts Department at UMass Boston, was recipient of a Fulbright Scholar Award and the Chancellor’s Distinction in Teaching Award. He studied with Nadia Boulanger and Olivier Messiaen in Paris and holds a PhD from Harvard University.  He is the author of 20 Little Piano Pieces from Around the World (G. Schirmer).  www.notescape.net