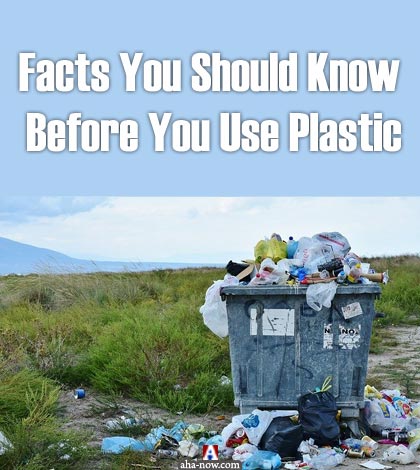 We created a problem and we need to solve it ourselves. Today, the plastic we invented is killing millions of birds and animals besides making hundreds go extinct. While some people, organization, and countries are doing their part to curb this global menace, plastic production and use aren’t subsiding enough to avert environmental dangers in the near future. Know more about the plastic facts and their impact on all of us. ~ Ed.

Plastic is everywhere, and it is killing Mother Earth. For the past years, countries worldwide have started a campaign to ban the use of plastic. The call for completely getting rid of plastic around the world remains high.

Ikea and Iceland are two countries that have already banned the use of plastic. The results of this step are expected to happen in the next years. Several retailers in the United Kingdom, such as McDonald’s, have already banned the use of cutlery and plastic straws. Most countries enforce strict rules in using plastic products, such as filing a lawsuit against someone who will be caught using plastic bags.

Most organizations and governments around the world are doing their best to decrease the usage of plastic products to create a better environment. But considering the continuous increase in the number of consumers, it is quite impossible to end this problem in a short time. That’s why people should understand the reasons and importance of completely eliminating plastic use.

Plastic is killing many marine animals and birds, major world rivers are filling up the world’s oceans with plastic, and plastic is getting banned in many countries. Know more plastic facts to learn about this global problem.

Using Plastic is Illegal in Many Countries

Back in 2017, Kenya is one of the countries that enforced the most strict laws to fight against plastic bags. Today, a person who will be caught using, selling, or even manufacturing plastic bags will be in jail for four years. Aside from four-year imprisonment, you will also be required to pay 40,000 US Dollars.

Italy, Rwanda, France, and China are just some of the countries that already taxed, partially banned, or completely banned the use of products involving plastic.

Two million is an extremely huge number. But, according to the report conducted by Ecowatch, more or less 1 trillion plastic bags are being used around the world per year. In New York, they are using a total of 23 billion plastic bags annually. That’s why banning the use of grocery bags is extremely important in cities like New York.

Banning the use of plastic is essentially effective and important in areas with a huge amount of plastic use. For instance, in 2015, the United Kingdom government had enforced a 5p plastic bag charge law. This has resulted in more than 80 percent of the total deduction to plastic bags’ yearly usage. Even though Britain still produces a large number of plastic bags each year, around 1.3 billion, the government concluded that they have seen slow progress in the reduction of plastic bag uses.

Too Much Plastic Took the Lives of Over 1.1 Million Animals and Seabirds Annually

The University of Queensland in Australia conducted a study back in the 1980s until now. The result they found out after analyzing the data collected from the 1980s to current stated that Green sea turtles consume more than twice of plastic garbage like they did for the previous 25 years. In connection to that, the United Nations stated that consumption of plastic could kill more or less 100,000 million marine animals and one million marine birds annually.

In addition to that, 90 percent of the fish and bird population are believed to ingest plastic particles which can lead to their death. This is mainly because plastic bags thrown into the sea will be divided into tiny particles. That is when sea animals, such as fishes, can ingest plastic garbage.

The Plymouth University published a study concluding that approximately 700 species of marine animals are close to extinction because of the continuous increase in the number of plastic usages.

Back in 1974, people were consuming only 4.4 pounds or two kilograms of plastic per capita. But currently, this number has increased to around 95 pounds or 43 kilograms per capita. The professionals expect that this will continue to increase if the people in each country won’t cooperate with this program of banning plastic.

According to National Geographic, if the usage of plastic products will continue to increase every year, the world will be filled with 12 billion metric tons of plastic by the next 30 years.

Approximately One Million Plastic Bottles are Bought Per Minute

People around the world are consuming more or less one million plastic bottles per minute, according to the report published by the Guardian. According to professionals, this number will continue to increase by more than 20 percent of people who won’t do an action.

Back in 2016, approximately 480 billion drinking bottles made from plastic were bought. For the past decade, the world had consumed 3000 billion plastic bottles. Unfortunately, only seven percent of this number were manufactured into new plastic bottles. The remaining number were thrown into the ocean or landfill, causing the death of many sea creatures.

The researchers of the World Economic Forum concluded that it only takes ten rivers in the whole of Africa and Asia to carry 90 percent of plastic to the ocean. Eight out of ten rivers were found in Asia, including the Mekong, Amur, Pearl, Ganges, Hai He, Yellow, Indus, and the Yangtze. The remaining two were located in Africa, which is known as the Niger and the Nile River.

The researchers also stated that the population living near the aforementioned rivers is high. Aside from that, they do not have a proper waste management system.

Aside from knowing how plastic was invented, it is also important for people to know and understand how to get rid of it to have a better world to live in.

Plastic does not have something good to do with the environment. So, countries and people worldwide should help each other mitigate the problems caused by too much plastic use.

After knowing these plastic facts, what are your thoughts? How do you plan to contribute to managing this plastic problem? Share in the comments.