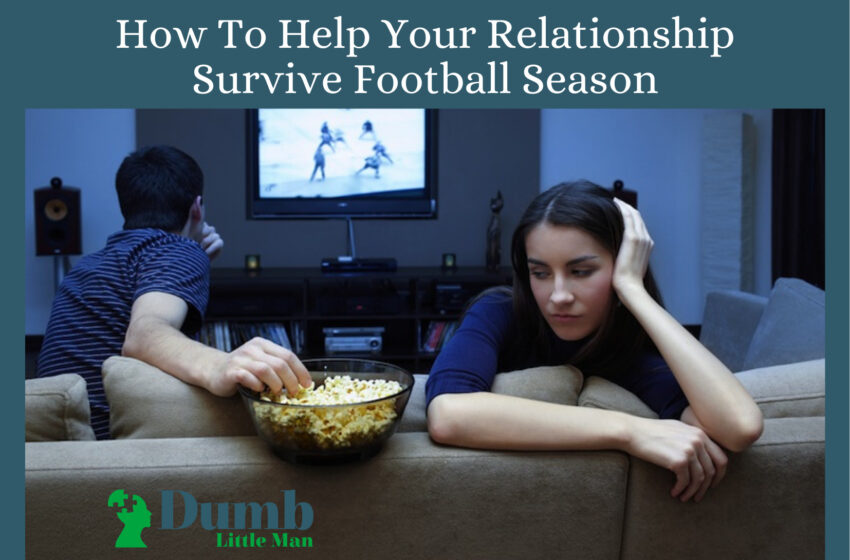 While many men (and women too) look forward to all that football season brings with it, many partners and spouses have a different view. In fact, some relationships experience a very bumpy ride from September – February as they navigate the myriad of games and differing views on priorities.

If you are one of the millions of couples that experience strife during football season, or any other sports season, take heart. Your relationship can not only survive but may actually thrive if you keep a few things in mind.

Why Sports Viewing Can Impact Your Relationship So Significantly

Let’s be fair – it’s really not the game that’s the problem. It’s your partner’s reaction to the game and the amount of attention it steals from other events, responsibilities, and your relationship.

Football is one of the biggest and most viewed sports seasons out there, so it gets a lot of attention. I’ve actually heard women refer to the NFL as the “No Family League” because of the impact it has on the family dynamic. But it’s not just football, any sport that occupies a significant amount of time and takes one partner out of the family equation can be a problem. In fact, any hobby or interest that isn’t shared by both partners can have the same effect.

At the heart of the problem is the imbalance obsessive sports viewing can create in a relationship. Seemingly loving, attentive men can turn into face-painted, screaming fools when their team is playing. Suddenly chores are ignored, an entire room and TV are claimed for hours or days at a time, and all the family duties shift to other partner, creating an overload.

Watching a weekly game or two may have been palatable many years ago, but now with 24-hour sports networks, 3 days a week for regular game broadcasts, and Fantasy Football, the opportunity to fall off the ledge into a type of football vacuum is too easy. And it creates problems – sometimes big problems.

The Effects Of Obsessive Sports Viewing On Your Relationship

“But wait, it’s just a game and it’s fun! Why is she (or he) so upset?” I often hear this sentiment from men whose wives are fed up with them during football season. Yes, it’s a game, but if it’s having negative effects on your life, family responsibilities, work, or relationships it’s also a problem.

“Come on, it’s just a few weeks out of the year, can’t I just have that?” It may not seem like a long time to you, but it’s plenty of time to cause your partner to feel angry and resentful.

Some of the most common relationship issues that arise during football season include:

For the partner who’s not particularly interested in football, there can be a sense of abandonment that sets in, especially if it takes up many hours during the week. These feelings don’t automatically resolve after the Super Bowl either, they can linger and cause resentment to build.

When one partner takes themselves out of the regular responsibilities those responsibilities don’t just go away, typically the other partner picks them up. So, household duties, transporting kids to activities, and social obligations all fall on one person. I had one woman tell me that she started considering herself a single parent during football season, which made her wonder why she shouldn’t get all the benefits of being single and just have an affair. Thankfully she didn’t, but the frustration that led her to those thoughts is just as unhealthy.

When one person is so focused for so much time on a certain thing, they neglect the conversations and follow-through that a relationship needs in order to survive. So, communication breaks down and conflicts that might have once easily been resolved go unattended and grow.

Were you thinking of buying new furniture or taking a trip? What about decisions related to parenting like whether Johnny should be able to have a social life despite failing chemistry? Taking yourself out of the relationship equation too much of the time can mean forfeiting your voice in important decisions. This is generally a foretelling of larger problems to come.

Financial issues can arise through a conglomeration of the above issues. In addition, football often comes with some “friendly wagers” or, in the case of Fantasy Football, potentially large bets. So, between one partner’s decision to book a Hawaiian vacation out of spite and the other’s football losses, there may be a lot to reconcile come February.

Recognize any of these? Of course, these aren’t the only issues that can arise, but they are some of the most common.

There are three things that need to be remembered if you are a passionate football fan:
• Moderation
• Consideration
• Inclusion

Even as an ardent fan you need to maintain sight of what’s really important. None of the football players actually care about you, but your family does. So, try watching the highlights for the less important games or reading about them online rather than devoting 3 hours to watching.

And perhaps make a clear point of keeping up with your side of the responsibilities during the football season. Negotiating trade-offs and compromising with your partner can be a good solution for you both also.

Lastly, you make not make a superfan out of your partner but asking them to join you in a game or two, explaining why you find it so exciting, teaching them the rules, and getting them involved in something you love can not only help them stay connected to you but can also reinforce your interest in them and the health of your relationship.

Dr. Kurt Smith is the Clinical Director of Guy Stuff Counseling & Coaching, a Northern California counseling practice that specializes in helping men and the women who love them. His expertise is in understanding men, their partners, and the unique relationship challenges couples face today. Dr. Kurt is a lover of dogs, sarcasm, everything outdoors, and helping those seeking to make their relationships better.