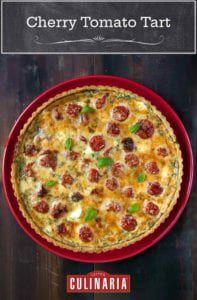 One of the ways The One and I tried to fend ourselves against the Great Tomato Attack of 2015 was with this tart. It only calls for a few dozen cherry tomatoes—that’s not enough to put a dent in even the most modest of gardens, but it’s a start. I chose to use only red tomatoes, but Sun Golds or a mix of both red and gold will work just as well. The yellow tomatoes just don’t show up as well against the filling. Oh, and make sure to use fresh soft goat cheese. And don’t even think of using pre-grated Parmesan cheese—remember, I have a few hundred thousand bloodthirsty tomatoes I could sic on your lazy ass.–David Leite

☞ READ THE ARTICLE: THE GARDEN THAT ALMOST ATE ROXBURY

WHAT FOLKS ARE SAYING ABOUT THIS RECIPE!

For the roasted cherry tomatoes

For the cherry tomato tart filling

Make the filling and assemble the cherry tomato tart

*What’s the difference between determinate and indeterminate tomatoes?

Well, if you’ve got a small space and don’t want to live surrounded by thousands and thousands of tiny tomatoes that just keep coming all summer long, you should be looking for cherry tomatoes labelled as “determinate”. Determinate tomatoes produce all their fruit at one time–perfect if you’re into making sauce or you’re just not looking for a fresh crop every day for 2 months. Indeterminate tomatoes produce all season long, a few at a time, which is perfect for a continuous supply. They’re a little more work and the tomatoes will just keep coming until the end of the season. Just something to consider before you start buying up piles of plants.