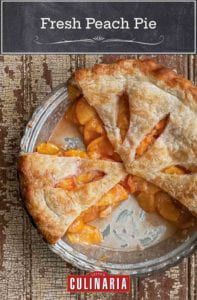 Fresh peach pie is a seasonal delight that you have to take advantage of when you can. A sweet, jammy filling that gets a hint of spice from cinnamon and nutmeg, is nestled into a vinegar pie crust. The whole recipe is so simple that you’ll make it again and again. I’ve heard that a wish will come true if the top of a pie is cut off, pushed to the side of the plate, and eaten last. Also, the wish must be repeated silently just before the last bite is taken, and not a word must be spoken until everyone has left the table. It sounds complicated but if you’re wishing for more pie, it might be worth it.–Mollie Cox Bryan

HOW DO I KEEP A PIE CRUST FROM BROWNING TOO MUCH?

There’s a foil trick that requires nothing more than taking a long, slender strip of foil and curving it around the edge of the pie, crumpling and crimping it slightly so it remains perched along the perimeter of the pie. This will shield that outer edge of the crust, which is the part that turns brown first. And by leaving the middle of the top crust uncovered, it will continue to bake and brown. It’s an oldie but a goodie, this trick. Peach season is fleeting, but this pie is so delicious that you should slip it into your summer any way you can. Fresh peaches, a hint of cinnamon, and a tender vinegar pie crust takes advatage of those gorgeous stone-fruits.