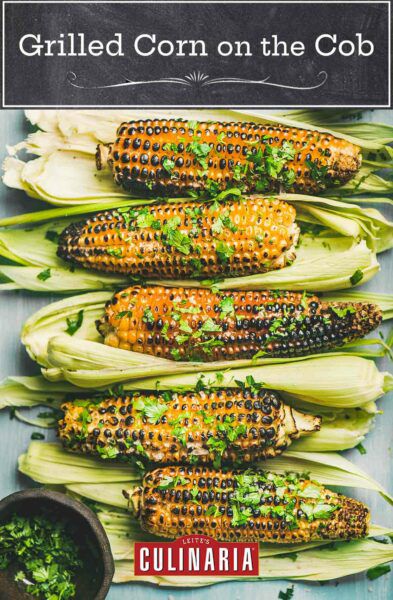 Grilled corn on the cob is a revelation to those who’ve never tried it. And in this version, the smoky, sweet kernels also get a boost from the cilantro, garlic, lime, and salt drizzled on at the end. To protect those delicate, sugar-sweet kernels, I grill each cob in its husk. Then toward the end of cooking, I peel the husk back and let the corn develop just a bit of tasty char. As if this weren’t lovely enough, I bring it all up a notch with cilantro pesto (use basil or parsley if you prefer) and plenty of butter.–Adam Perry Lang

SHOULD I LEAVE THE HUSK ON MY CORN?

Often, when you grill corn, it’s one or the other—husk on or off. Both ways have their advantages and Adam Perry Lang uses them both in this recipe. Soaking corn on the cob with the husk on adds more moisture than just soaking a naked cob because both husk and silk absorb moisture. In the first 10 minutes of grilling, your cobs are getting steamed, helping to keep them a little juicier in the end. A husked cob of corn will cook faster and you get the benefit of more smoky flavor, one of the reasons we love to grill in the first place, right?

Grilled Corn on the Cob This one’s a backyard party classic that I’ve put a new spin on. Corn on the cob is cooked in the husk, then slathered with plenty of cilantro-lime pesto.