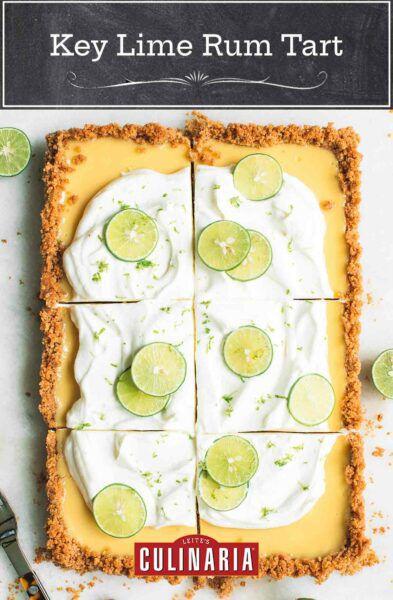 A Key lime rum tart takes the classic and adds a grown-up twist. Rum in the filling plus a splash of rum in the whipped cream makes this sweet-tart after-dinner treat even more glam. The graham cracker crust adds a nice hit of crunch to all that creamy, dreamy lime filling.

One bite of this tart and you’ll instantly feel like you’ve been transported somewhere warm and tropical. This tart makes a bit more than a regular Key lime pie, perfect for serving after a small dinner party.–Elizabeth Van Lierde

Each creamy slice is bursting with tart lime flavor on top of an extra-thick graham cracker crust. Be sure to serve it up with extra rum-infused whipped cream.

*What is a Key lime?

You’ve probably encountered Key limes, at least in the form of the pie. But have you ever wondered what they actually are? And why it takes 4 to 5 times the amount of Key limes to equal the regular lime you see in the produce department? From Southeast Asia, Key limes are smaller citrus-hybrid than the Persian limes we think of as the “ordinary” lime.
Key limes are also seedier, more acidic, with a thinner skin, stronger aroma, and characteristic flavor. In North America, they’re known as Key limes because of their association with the Florida Keys and the namesake pie. Elsewhere, they’re also known as the West Indian lime, the Omani lime, or dayap.