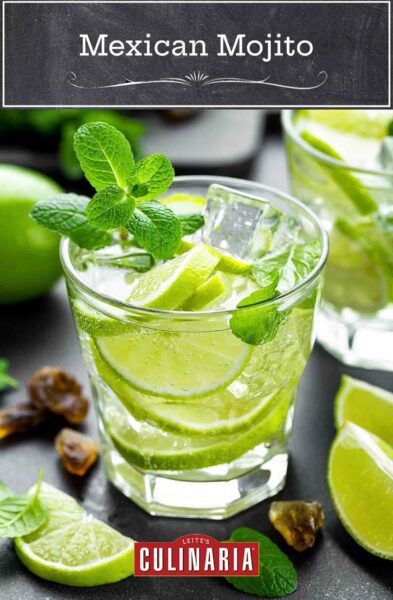 The Mexican mojito swaps in smooth tequila for the traditional rum in this not-quite-classic cocktail that’s made with muddled lime, mint, and sugar. Perhaps the best mojito ever. The mojito is so sexy and light that it would be a shame not to adapt the Cuban original to the Mexican model. Tequila is a more versatile mixer than one might think, especially in drinks that already lean to the tart and citrusy. The typical mojito is made with white rum, but a smooth white tequila works perfectly with the wisp of mint and sweetness. A very quick drink to make—and drink.–Deborah Schneider

WHAT’S THE DIFFERENCE BETWEEN TEQUILA AND RUM?

If you’re going to mess around with a mojito, you might as well know why. Tequila, a regionally distilled beverage, and type of alcoholic drink made from the blue agave plant is made primarily in the area surrounding the city of Tequila, in the central-western Mexican state of Jalisco. Tequila must use only blue agave plants rather than any type of agave and it’s commonly served neat in Mexico and as a shot with salt and lime across the rest of the world. Rum is a distilled alcoholic drink made by fermenting then distilling sugarcane molasses or sugarcane juice. The distillate, a clear liquid, is usually aged in oak barrels. Most rums are produced in the Caribbean and American countries, but also in other sugar-producing countries, such as the Philippines and India. Rum is produced in various grades. Light rums are commonly used in cocktails, whereas golden and dark rums are typically consumed straight or neat. The typical mojito is made with white rum, but a smooth white tequila works perfectly with the wisp of mint and sweetness.