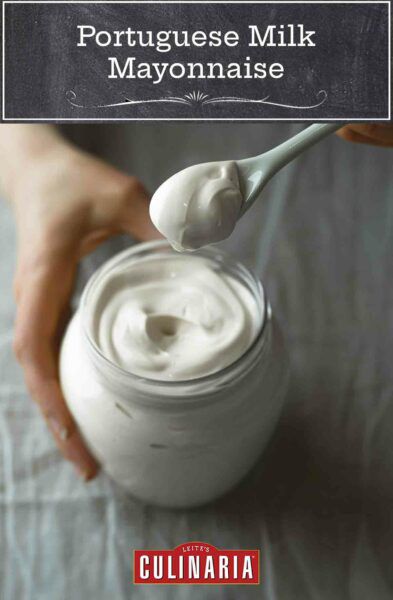 Milk mayonnaise, called maionese de leite in Portuguese, is silkier and lighter than egg-based mayo. Magic happens when butterfat and oil collide in a high-speed blender. And the addition of garlic gives it a little heft, as well as a little zip. This is one of those recipes that require quotation marks, not out of affectation, but because it’s not a true mayonnaise. It contains no egg yolks or mustard. It’s nothing more than an emulsion of milk and oil. More Brazilian than Portuguese, it’s just now beginning to be used on the Continent. The taste is lighter and cleaner than that of egg-based mayonnaise, allowing other flavors to come through.

☞ READ THE ARTICLE: THE SECRET BEHIND MILK MAYONNAISE

Since I was given the recipe, I haven’t stopped finding ways to cook with it. The master recipe is only a canvas for additions. Besides the uses in this book, I’ve smeared the variations on grilled meats and fish, used them as dips and in dressings, spread them on sandwiches, and stirred them into potato salads, much as I do with actual mayonnaise.–David Leite

WHY ISN’T MY MILK MAYO EMULSIFYING?

Atenção: Like all emulsions, this recipe can be a bit finicky. But adding the oil in a thin stream and stopping when the right consistency is reached is the key. For almost foolproof results, a handheld blender is best, but a small canister blender with a narrow base will do (tall and narrow is best here). Don’t do as some of us did and assume that a stand mixer or food processor will work—it just won’t. If you’re working with a less-than-powerful immersion blender, the consistency of the mayonnaise may turn out thinner than you’d expect. You can help it along by slowly adding 2 more tablespoons of oil to the milk mayonnaise as you continue to blend and it will thicken nicely. This milk mayonnaise, called maionese de leite in Portuguese, is an emulsion of milk and oil seasoned with garlic and white pepper. Add 1 loosely packed cup of well-dried fresh cilantro leaves and tendril-soft stems and a 1 1/2-inch peeled and grated thumb of ginger to the cup along with the milk, 1 3/4 teaspoons of lemon juice, and the pepper. Omit the garlic. Whir in the oil as directed above. Stir in 1 scallion cut into thin slices on the diagonal.

Add 6 anchovy fillets (generous 1 tablespoon) packed in oil to the cup along with the milk, lemon juice, garlic, and pepper. Whir in the oil as directed above. Omit the salt.

Add 2 teaspoons of your favorite curry powder to the cup along with the milk, lemon juice, garlic, and pepper. Whir in the oil as directed above. Before using, let this sit for an hour or so in the fridge to bloom.

Add 1 1/2 tablespoons of double-concentrate tomato paste to the cup along with the milk, garlic, and pepper. Omit the lemon juice. Whir in the oil as directed above. Stir in 1 tablespoon minced oil-packed sun-dried tomatoes.