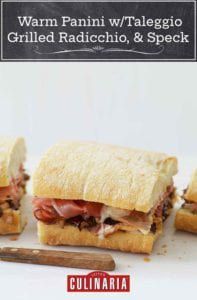 This recipe for panini with Taleggio cheese, grilled radicchio, and speck isn’t for those eaters who crave bland or mild sandwiches. Full of assertive flavors, it covers all the bases–earthy Taleggio, bitter radicchio, smoky speck, and sweet walnuts. You’re welcome.

The formal, multi-course meals that Italy is known for give way to piatto unico–one dish meals that are well-balanced, hearty, and can include dishes such as bountiful main course panini. They’re prepared with the same love and passion that are so essential to Italian cooking, yet are still creative and flexible enough for improvisation and unusual combinations to fit anyone’s taste.-–Toni Lydecker

HOW DO I MAKE A PANINI WITHOUT A PANINI PRESS?

If you’re shaking your head in disappointment, muttering to yourself, “Damn! If only I had a panini maker…,” stop right there and read this recipe. No panini maker required. However…we do understand the allure of crisply toasted and pressed ‘wich. A waffle maker works like a charm on panini, as does weighing down the sandwich, like a muffuletta, before cooking. Wrap it up and put in the fridge with a weight on top–a small skillet or a plate with a can of tomatoes will do the trick– then grill after a few hours of pressing. Ta-da!

You can also make a toasted version of this sandwich using sliced country-style white or whole-wheat bread. Just assemble as above, heat a little olive oil in a skillet, and toast the sandwiches, turning once, until golden brown on each side. See how easy that disappointment was quelled? You’re welcome. Panini, like sandwiches everywhere, invite the maker to branch out in creative directions. This combination brings together several strong-willed ingredients, all shouting, “Taste me!” Fortunately, their insistent voices harmonize in these warm, delicious panini.