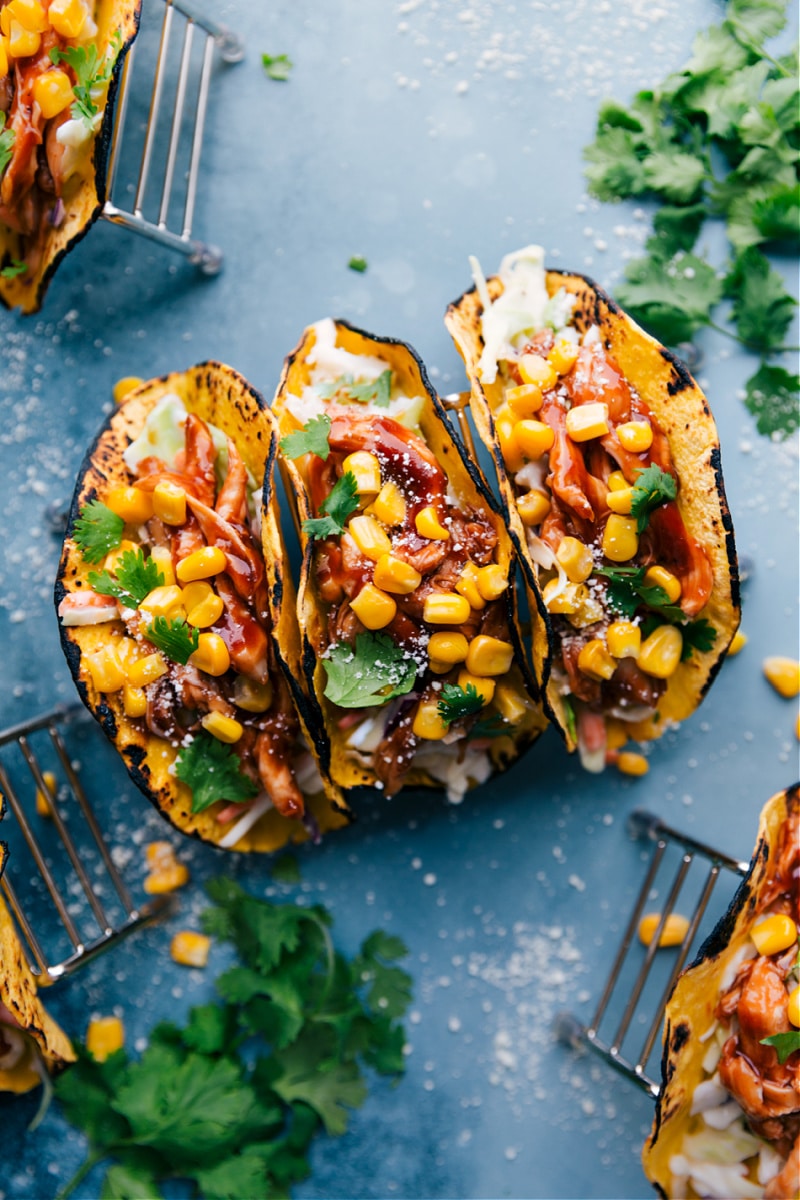 Super-speedy BBQ Chicken Tacos with Coleslaw require minimal ingredients and pack a flavor punch! We toss packaged coleslaw with coleslaw dressing and load that up in a tortilla. Top with saucy BBQ chicken and fresh sweet corn and dinner’s on the table! 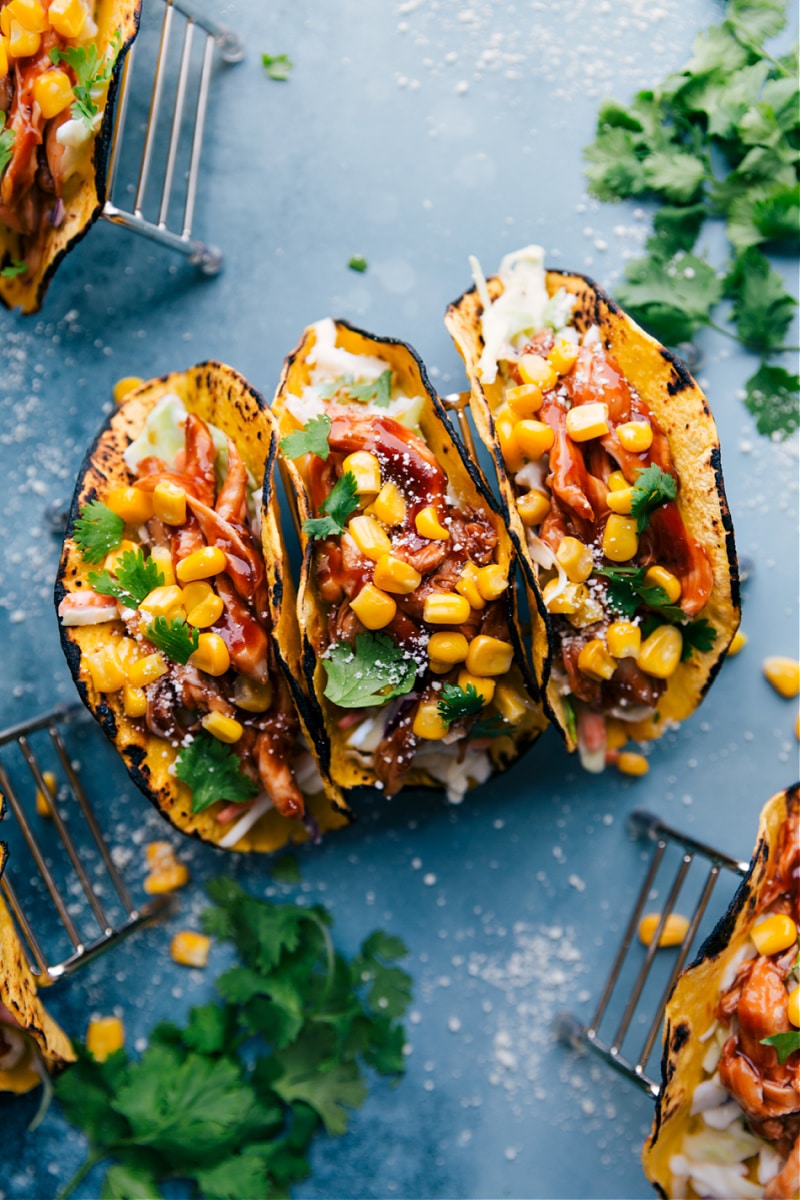 These BBQ Chicken Tacos with Coleslaw are a part of our Back-To-School Lifesavers — a series of recipes that are intended to have little (or no) veggie chopping, minimal prep time, around 10 ingredients or less (not including pantry staples), and use kid-friendly ingredients. Click here to see all the recipes in the series!

We’ve featured a BBQ Chicken Tacos recipe before, but this version is pretty different. Those BBQ chicken tacos ended up more Southwestern-inspired with black beans and peppers and a cilantro-lime sauce. These are made with coleslaw instead — more of a classic BBQ chicken flavor!

They also couldn’t be much easier to make; these BBQ Chicken Tacos with Coleslaw take minutes to whip together and the whole family will go crazy for them! 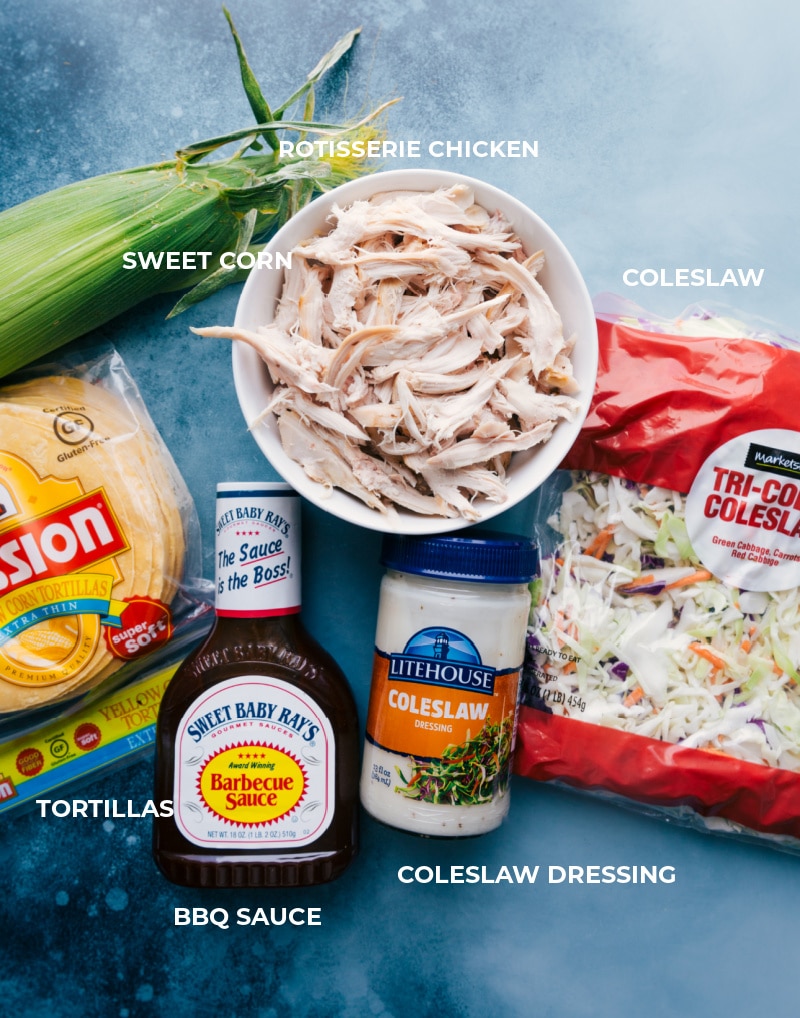 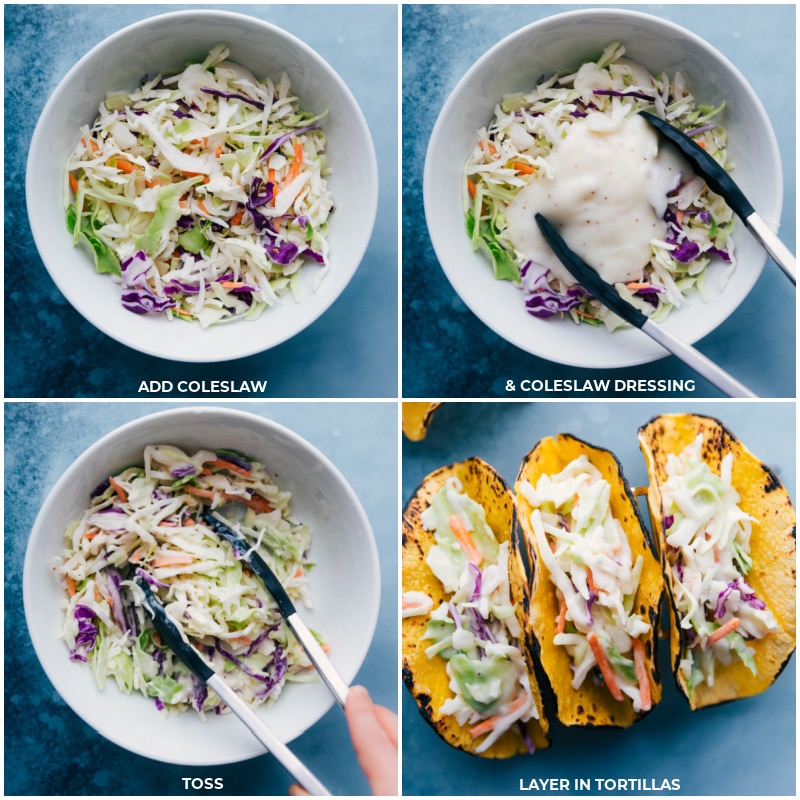 We love corn tortillas with this saucy slaw and sweet BBQ chicken. They can be tricky to work with, though, because they break easily and dry out quickly. I recommend charring the tortillas for the best flavor and texture! When charring, I recommend working with one at a time, leaving the rest in the bag so the others don’t dry out too quickly.

Here’s how we char the tortillas:

This recipe is supposed to be quick, but charring tortillas is super fast and well worth the extra minute — it adds an incredible amount of flavor and texture to the tacos.

If you don’t love corn tortillas, use flour ones. Even though flour tortillas fold nicely, I still like to spray them with cooking spray and brown them in a skillet or over an open flame; this adds so much flavor! If using flour tortillas, I like to get the unbaked ones (by TortillaLand®; not sponsored) and cook them in a skillet first. And if you aren’t in the mood to char them, they make a nice sandwich wrap without being heated. 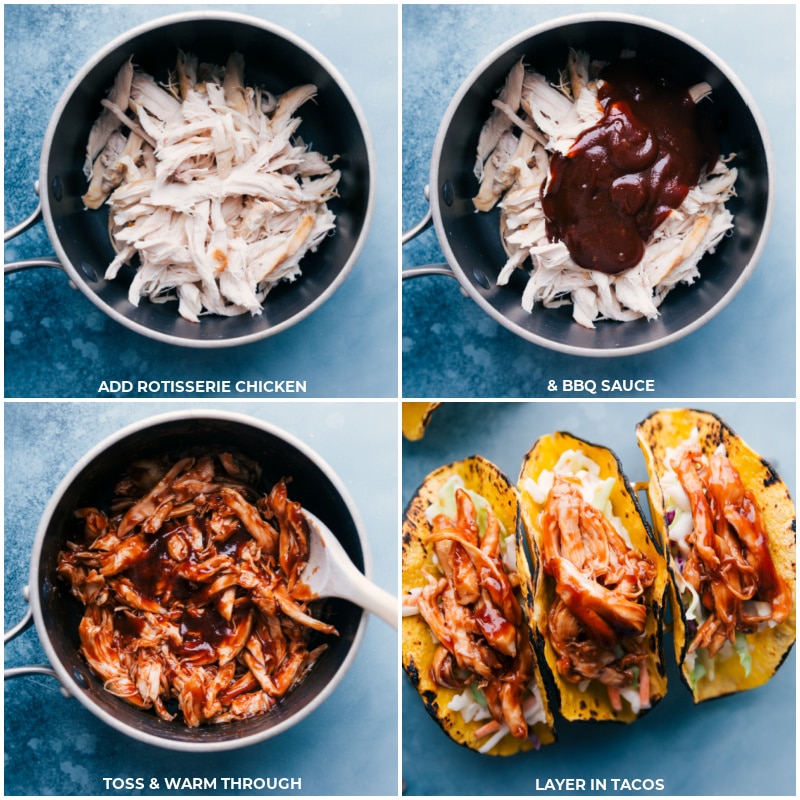 For a little more pizzazz, add a thinly sliced, ripe avocado to these tacos. It adds a nice creaminess! A few sprigs of cilantro also adds a nice contrasting and fresh flavor to these BBQ Chicken Tacos with Coleslaw.

Add sauces to personal preference. This recipe is very forgiving and you can really play around with quantities to get things exactly as saucy as you’d like. For saucier chicken, add a touch more BBQ sauce. For a saucier slaw, add a touch more coleslaw dressing. And of course, if you prefer less sauce, just reverse this!

Super-quick BBQ Chicken Tacos with Coleslaw require minimal ingredients and pack a flavor punch! We toss packaged coleslaw with coleslaw dressing and load that up in a charred tortilla. Top with saucy BBQ chicken and fresh sweet corn and dinner’s on the table! 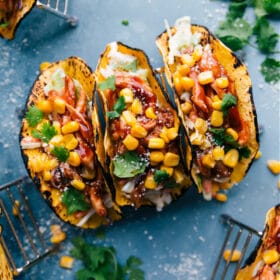 Super-quick BBQ Chicken Tacos with Coleslaw require minimal ingredients and pack a flavor punch! We toss packaged coleslaw with coleslaw dressing and load that up in a charred tortilla. Top with saucy BBQ chicken and fresh sweet corn and dinner’s on the table!

Note 1: Chicken: We don’t want to cook the chicken (it’s already cooked — it will get dry and lose flavor if heated too long or at too high of a heat)–we just want to take the chill off. Warm gently over low heat until just warmed through. If using a hot and ready rotisserie chicken, no need to warm it through, simply warm the BBQ sauce in the microwave (covered) for about 30 seconds and then toss with the already-warm chicken.
Note 2: Tortillas: Spray both sides of the tortillas with olive oil cooking spray and char the tortillas directly over the gas flames for a few seconds. Use tongs to flip until tortillas are lightly charred and soft. Immediately fold the tortilla in half (so it will fold into a taco nicely later) and place it under a towel to keep warm. Alternatively, warm tortillas in a large skillet over medium heat (in batches, so the skillet isn’t over-filled). Flip to warm each side, remove from heat, fold in half, and place under a towel to keep warm. Alternatively, warm through in microwave, covered with a damp paper towel.

We do our best to provide accurate nutritional analysis for our recipes. Our nutritional data is calculated using a third-party algorithm and may vary, based on individual cooking styles, measurements, and ingredient sizes. Please use this information for comparison purposes and consult a health professional for nutrition guidance as needed.