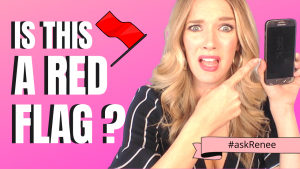 So what happens when you’re actually dating a guy, you guys are exclusive. But then you did that thing.

Do you know what I’m talking about? You went and you checked to see if he was still on the dating apps and guess what? He is. What does that mean? What do you do? And how do you handle it? Let’s talk about that here in my blog.

Hi, everyone. Welcome back to my blog. I’m Renee Slansky and I am a professional dating and relationship coach, and I help millennial women around the world find and build the relationship that they are deserving of.

Now, obviously, in this time and age, we have dating apps.

When it comes to us, the women that use it, who go on it, who meet a great guy, we finally feel like we’ve got something and we’re exclusive with them.

It can be really disheartening and really betraying when we go and find out that the guy that we are seeing is still on those dating apps. This is something that I’ve had so many women and clients do. And come to me in tears saying, “I don’t understand. I thought we were together.

Why is he still on the dating app?”

Number one, if you have any sort of doubts if you are actually exclusive and you haven’t watched my video on how to know if you’re exclusive, go and check it out here.

You need to make sure that you are on the same page as him.

Because if you think that you are together as a couple but he’s got something completely different in his mind, well, then there’s obviously a communication breakdown.

Address it straight away

Now, if you have discovered that he is on the dating app, what you need to do is you need to address it straight away. There’s no point then going into a stalking frenzy, going on in social media, testing him, playing games, creating fake profiles. Dude, we’ve done it, we’ve all done it, to then work out if he responds to you. Just go and ask him.

You are allowed to be direct when you are dating someone. In fact, it’s just an unnecessary thing. It’s the best way to be able to work out is this person actually being upfront with you, are they wanting the same things as you and what you need to do?

Now, don’t ask him straight away when you’re in a state of heightened emotion, because chances are, it’ll just be a whole lot of anger or cryptic messages and then he’ll just be left confused. Wait till you’ve calmed down a little bit and then try and do it face to face if you can.

You’re not going to see him for a few days, maybe make a phone call. Either way, give yourself a little bit of time to adjust and process what you’ve just seen.

Take screenshots just for evidence in the case. Although I will say this, if he denies it and you have the evidence, it’s already a major red flag.

However, I understand sometimes we need to just show that that, “Look, I’ve actually seen the proof and I want you to know that here’s some accountability,” and then ask him directly. And that can be something as simple as, “Hey, I need to ask you something.

This obviously shows that there’s some level of mistrust there that you had gone to a point of stalking and getting back on to see which isn’t the best thing to be able to have in a relationship. But at least you’re being honest about it and you’re addressing the situation right now.

If he denies that he’s on the app, then what you need to do is you need to address that as well directly and say, “Well, I know that’s not true because I have seen you on the app and I’ve also got the screenshots to prove it. So I need to know now, are you dating someone else? Because I can’t continue to see you if you are lying to me and if we aren’t on the same page here.”

Now, if he says on the other hand, “Yes, I am on the app. I just haven’t disconnected it. It’s just something in the back of my phone. I’m not on it. But it’s still there and I need to deactivate my account.” That could go either way.

Sometimes guys say that to have like a get out of jail free card. Me, if a guy still has access to an app when he’s decided to be exclusive with you, that to me signifies a little bit of a commitment issue.

Why does he need to hold on to this branch it was just decided to go onto this branch instead? If he’s really wanting to be committed to you and build something with you, then he has absolutely no reason to have an app on his phone even if he’s not active on it.

You need to tell him that you’re not going to continue to date someone that either lies about their status or feels the need to hold on to having apps on your phone just in case things don’t work out.

This isn’t about being aggressive. It’s about clearly setting a boundary saying this is what you would like and this is what you know is needed to build a healthy relationship. And he can either step up or he has to step out. Now, ladies, if you struggle with knowing what the red flags are, and it basically gets to the point where you do have to stalk, or you have to go on the dating apps to work out if he’s still on there, then let’s just make life easier. Download my free cheat sheet, the red flag cheat sheet.

I list out in that cheat sheet the different stages of working out where the red flags are, what behavior and signs to look for before it’s too late.

I would communicate to him that this is something that has hurt you. It’s something that you feel has broken a bit of trust and he now needs to rebuild and re-earn that trust again. Doesn’t mean you play games and it doesn’t mean that you go silent.

All it means is that you don’t give him as much access to you as you used to when the trust was there. Now, after you do this, you need to assess his actions.

How does he behave after you’ve had this direct conversation with you and depending on what he said in that conversation?

For instance, if he said, “No, I’m not on the apps,” even though you know he is, look at the other things that he’s doing, where are you finding more incongruencies, where are you seeing more red flags. And if the guy’s lying about being on a dating app, then I don’t think that you should continue to date him because where’s the honesty there, where’s the trust there?

Or if he says, “I got the app on my phone, but I’m not actually acting on it.” Does he then go and delete it? Either way, you’ve got to remember that dating is a character assessment and it’s important to take everything into perspective here.

If you feel like this is a deal-breaker for you, then it’s fair enough. But before you break anything, make sure you address it first so that you can actually hear his side of the story so that you can then make a decision.

Making a decision gives you back some sort of control to actually decide what sort of standard you want to set when it comes to your relationships.

It may mean that you no longer see this guy. It may mean that actually he turns around and he does step up. Either way, you can’t sit in limbo with this and it needs to be addressed straight away.

Well, there you go, girls. I hope that it has helped you. Let me know if it has by dropping a “Thanks, Renee,” and don’t forget to subscribe to my YouTube Channel and grab that red flag cheat sheet if you really struggle with red flags and I’ll see you girls next time. Bye for now.