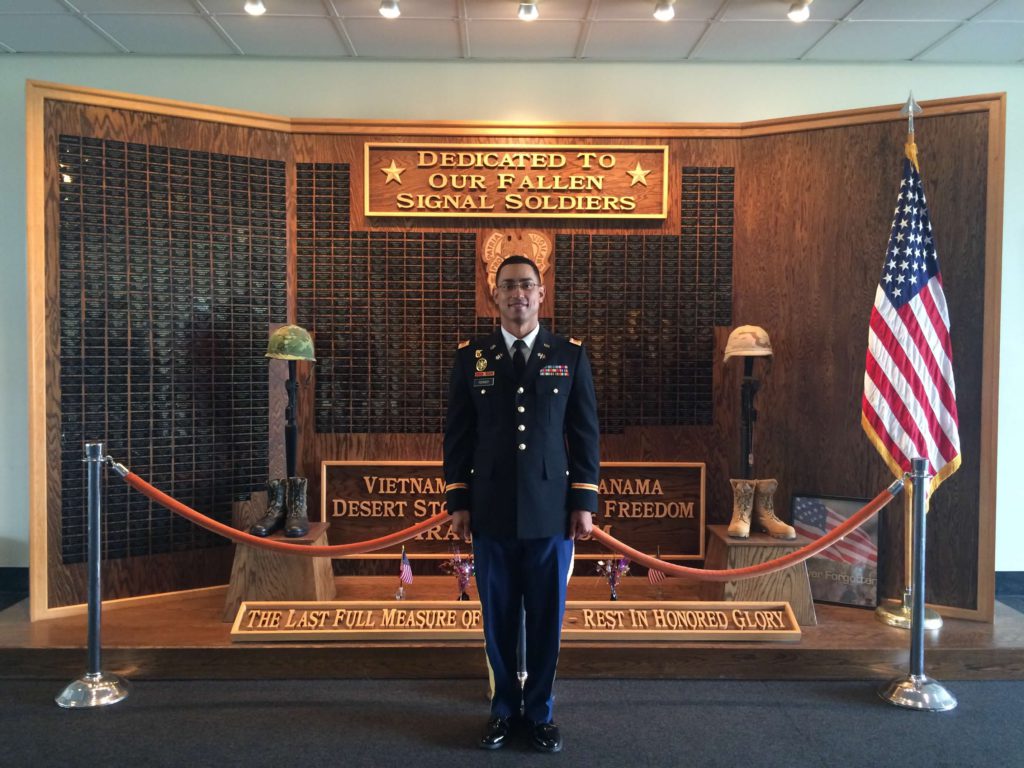 In honor of Veteran’s Day, we spoke with 360i’s Media Technology Manager Jonathan Ferrer about his career in the Military and its influence on his work in Marketing.

Can you share with us what led you to a career in the military, and what your role and experience was during that time?

Since childhood, I always had a desire for serving in the Military. However, since I was first in my family to join the Military, it was always a mystery to me as I did not know anyone who served. My biggest understanding of what the Military was and what they did was from what I had seen on television and what I learned in school. I was always amazed how someone could voluntarily risk their lives to protect and defend their country, but I knew that I would be proud to serve my country in any way. In addition, my parents did not have a lot to offer us growing up in the South Bronx housing projects, so I wanted a life where I could lift my family out of poverty. I knew that the Military and school would give me that opportunity to not only assist my family but to also create a legacy for the next generation.

It was not until the attacks of September 11, 2001 when I knew for a fact that I was going to join the Military. However, I would not join the Army Reserves until 2006, as I wanted to achieve my associate degree in graphic design from Sullivan County Community College before signing up. At the age of 22, I joined the Army Reserves as a Patient Administration Specialist. I initially wanted to join as a Multimedia Illustrator, but the role was not available. However, I decided to join anyway because I was eager to begin my Military career.

Basic Combat Training in Fort Leopard Wood, Missouri was one of the most beneficial experiences I have ever been through. I not only learned the art of Military science, but also the importance of teamwork, leadership, and grit. Even through the toughest of times, I knew that I could never give up, giving up would mean giving up on myself, my team, and my leadership. I knew that I had to try my very best at everything, to not only be a success for myself, but to also be a success for my team.

After completing Basic Combat Training and my Military Occupation Specialty school, I returned to the Bronx to pursue my undergraduate degree in Graphic Design from Fashion Institute of Technology and continue my service as a Specialist in the Army Reserves. It was during this time that I also met my wife, as we were at the same company. She is still serving in the Army. I was called to active duty a month after graduating in 2010 and served three years as an Information Technology Specialist in Fort Dix, NJ, where I maintained all communications systems for a Medical Support Unit. Due to the various opportunities active duty presented, I was promoted twice, earned various awards for winning Non-Commissioned Officer of the year, earning Gold in the German Armed Forces Badge for Military Proficiency (this is a combat/athletic competition held by the German Army), and completing my MBA through American Military University.

One of my biggest achievements in the Army was becoming a Commissioned Officer by completing Officer Candidate School (OCS) in Fort Benning, GA. After my active duty tour, I wanted to lead Soldiers and decided to become an Officer. In doing so, I had to go through one the Army’s largest Commissioning sources, Officer Candidate School, which was most difficult programs that I have ever been through. I was challenged in every aspect of tactical abilities, strategy, leadership, and self-management. OCS taught me the importance of being a leader. In OCS and as an Officer, the phrase “Follow Me” is ingrained in our philosophy. Leaders lead from the front; in every aspect of leading people, operations, and yourself. We must be the example of a leader, in and out of uniform, and in every aspect of your life.

After OCS in 2014, I returned to the Army Reserves as a Signal Officer for the Civil Affairs Company in Fort Dix, NJ, where I was the Officer in Charge for all IT, voice, sand satellite communications for the organization. In 2016, I returned to Fort Benning, GA for the opportunity to attend U.S. Army Airborne School and become a Paratrooper. As a person who feared heights, Airborne school was quite a challenge as I had to jump out of a moving plane with all my combat gear and land safely to continue to mission on land.

In 2018, I had the opportunity to transition to a new organization and become a Public Affairs Officer for an Army Reserve Unit in Fort Totten, NY, which is my current position in the Military. As a Public Affairs Officer, I am in charge of telling the Army’s story through various media channels, press conferences and news broadcasts.

How has your time in the military affected your career in Marketing? What lessons did you take away from those experiences and how do they apply today? Feel free to elaborate and tell your story here!

Among the various roles and positions I have held in the Military, the most important aspect that affected my career is my ability to adapt and operate in various roles and responsibilities. Service Members are trained to learn many different skillsets outside of their jobs, such as anti-terrorism, security, logistics and maintenance operations to name a few. This is incorporated in our philosophy because Soldiers may be placed in a situation where we must operate with minimal staff/or and resources. Therefore, our broad skillset in various concentrations can aid in maintaining operations in any situation. In my Military career, I have held various positions outside of my field, such as a Security Officer, Anti-Terrorism Officer, Logistics Support Liaison, medial support, and Human Resources Specialist. I feel that these roles helped me become a better Officer, as I can lead and operated teams from different specialties.

I also have adapted this philosophy in my personal life towards my career in Marketing. Since marketing is such a broad industry that encompasses technology, social media, branding, media, search, etc., I have sought out educational courses and volunteered for various positions that enabled me to continue my education around the industry and also utilize my newly learned stills for non-profit organizations and educational groups. For example, I received college degrees and certifications in marketing strategy, social media management, analytics, web-development, and photography. I then volunteered as a graphic designer and marketing manager for various non-profits such as the National MS Society, Veterans Connection Inc., and several Christian organizations. I have also volunteered and held positions as a designer and social media manager for educational organizations, such as Golden Key Honor Society, Mu Kappa Tau – National Marketing Honor Society and Harvard Extension Student Association and Harvard Veterans Alumni Organization. These various skillsets helped me understand the overall marketing strategy of our clients and places me in a position where I can help them achieve their goals.

How did your role in the military play to your existing strengths, and help you build new skillsets?

Being a Commissioned Officer has truly helped me become a better leader and enabled me to conquer any fears or anxieties that may be present at any given situation. As nerve-wracking as it is overseeing a mission, personnel, and property, it is also rewarding to earn a position of leadership. It makes me a better person knowing that every action I take and every decision I make directly affects another individual. As a Military leader, I want to be that example for my Soldiers, those who are following me, and those working alongside me. I would not say that being a leader was an existing strength, but it is a skillset that is developing each day with each decision I make in and out of uniform.

Tell us more about your overall career path and where it’s taken you, both in the military and beyond. How have the different military and civilian roles you’ve played influenced both your professional and personal outlook?

As an Army Reservist, I have a unique opportunity to have two very important careers throughout my lifetime, one in service to the industry and the other in service to my community. Within my 14 years of service, I have been fortunate enough to have accomplished every goal I set out in my Military and civilian careers. Even though I was called to active duty after graduating from my graphic design program and was unable to practice it in the industry, I have been fortunate enough to embark in the field of business and marketing when I pursued my MBA while on Active Duty. It was a difficult task pursuing a degree while on Active orders, however I learned a great deal about marketing and its impact in the industry, which lead me to pursue a career in this field.

In addition, after completing my MBA, a connection of mine introduced me to Harvard University’s continuing education program. I found the program intriguing and decided to pursue a master’s degree in digital media design, which I am inline to graduate in May 2021. I personally feel that we are a product of our surroundings, so if you surround yourself with the right people, you will flourish. The Army has provided me with the opportunity to connect with the right people, has placed me in the right positions, and has provided me with new opportunities that I never imagined pursuing. I plan to continue my journey in the Military and in marketing, accepting every challenge presented to me and learning from my peers and superiors.

What advice would you offer to veterans looking to transition to a career in marketing?

My recommendation to any transitioning veteran wanting to get into a career in marketing is to reach out to another veteran who is working in the industry, regardless if you know them or not. Like many support networks, whether physical or online, there are many people who want to help. I was fortunate enough to get into this career due to a fellow Army Veteran I met online who was working in Ad Operations. We met through LinkedIn’s Veteran’s Mentor Network and we discussed the overall industry and his experience in Ad Operations. When a position became available in his organization, I reached out again and asked if I can apply. I applied, interviewed with the team, and received the job a couple of weeks later. It is important to make these virtual connections into real connections. I believe that I would not be in the industry today if I have not reached out to him online and then met him in person. It was a pivotal moment in my career, and I am glad we connected and am honored to have him as my mentor today. Since there is such a great value in mentorship, I have joined multiple online Veteran groups in the industry and through my universities. I also became a mentor through Veterati, which is a mentorship platform that enables me to mentor other veterans on career growth and educational opportunities. It was been such an honor to help others achieve their goals and I make sure the help anyone that reaches out to me.

I feel that joining the Military was one of the best decisions I have ever made, and it truly has impacted my life for the better.

Check out the following links for more context on the military courses and/or programs mentioned in the questions above.