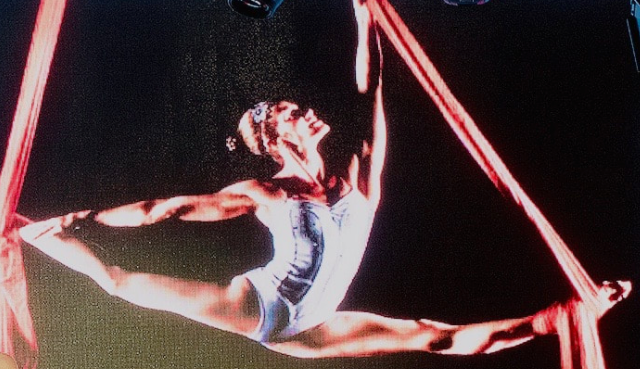 “If you want to fly, you have to give up the shit that weighs you down.”-Toni Morrison

Christine Van Loo is an elite athlete that started out as an acrobatic gymnast, a sport in which she was a 7-time consecutive US National Champion, female Olympic athlete of the year, and athlete of the decade. After retiring from competition in that sport, she married and settled into a new life that seemed complete, but something also seemed missing.

She went through a period of depression before coming up with a new challenge and reinventing herself as an aerialist. She has much to teach about pursuing our dreams and becoming all we can be, and now in addition to being an internationally acclaimed performer as an aerialist, she has a set of teaching dvds for aspiring aerialists, and also coaches the champion’s mindset. She uses the acronym S.O.A.R to summarize her philosophy:

I was fortunate enough to be able to interview Christine, an amazing athlete and human being.

I think a crucial part of your story is when you had retired from competition as an acro-gymnast, and were finding yourself not totally fulfilled. Then you came up with a second career as an aerialist. How did you come up with this idea, and how did you motivate yourself to pursue it?

After I retired from acrobatic-gymnastics I married my first boyfriend and we moved to Italy where I became a Navy officer’s wife and a housewife, roles I struggled to fill authentically.

When we returned to the United States I worked as an instructor. I taught gymnastics to children, dance to gymnasts, stretch classes to an aerobics national champion, acrobatics skills to world champion ballroom dancers and fitness classes to the general public. But no matter how well I did as an instructor, I felt like I was waiting for my real life to begin.
One day, I went to watch a friend of mine audition for Cirque du Soleil at Brown’s Gymnastics, one of the places where I taught. I sat alone on the bleachers as dozens of dancers and gymnasts signed their names to a list before warming up on the gymnastics mat.
Suddenly my hands started shaking uncontrollably. As I gripped the bleachers to steady them my body started swaying back and forth. I clenched the bleacher so tightly my knuckles turned white, but I could not still my body.
That moment was an epiphany, an aha. A realization I was watching my real life from the outside. Those strangers were my family. This art form was my home.
Without thinking, my body stood up. My feet walked to the table. My hand signed my name onto the audition sheet.

During the seven hour audition we danced, tumbled, balanced in handstands, stretched, acted and were interviewed. I had no expectation they would choose me. It had been five years since that old life as a competitive acrobat. But a few days later a woman with a French-Canadian accent, Nicolette, called to offer you a two-year contract to tour the world with Cirque du Soleil’s ‘Quidam’.”
My breath caught in my throat. My words went AWOL. My mind exploded with images of acrobats flying through the air. Of stages, lighting, costumes, music; of performing, traveling to exotic places, and stretching my creative limits. She was offering my perfect dream. Then my husband stepped into the doorframe and the dream shattered. “Who is that?” he mouthed.
I found myself between two colliding worlds. The “real” world, in which I was a wife and an instructor with newly registered students, and an apartment renter with a newly signed lease. And the dream world of running away and joining the circus.

“I’m sorry Nicolette,” I said, “I can’t accept the offer. Thank you for asking me.”
“I don’t understand, Christine. You should continue to perform. Performing is inside you.”
I knew she was right, but I hung up the phone and watched my dream disappear like a train pulling from the station without me.
Months passed. They seemed like years. I put myself on automatic pilot to make it through the days. It was not that my life was bad. I had no reason to complain. That only made things harder, so I accepted this was who I was. It wasn’t who I dreamed I could be, though, and that broke my heart.

Then a friend told me about a show in which I could perform at corporate events on the weekends then go home during the weekdays. I sent this company a video of me competing and they hired me to do a show two weeks later. I was only working as a background cast member but it was through this show that I discovered aerial artistry. When I watched aerial artistry it reminded me of when I discovered acrobatic gymnastics as a child. Both times I felt this excitement in my chest so large I thought I would burst into a supernova. I knew that this too was my calling too. It was never a thought of how to motivate myself to become an aerialist; I simply had to do it.

You were self-coached while learning to be an aerialist, so how did you teach yourself?

The first three skills I learned from a former teammate of mine who just retired from Cirque du Soleil. The majority of the rest I learned mainly through exploration and trial and error, which amounted to lots of torn skin, bruises, and even setting the back of my pant leg on fire doing a slack drop on the wrong kind of fabric. Even with a competitive acro gymnastics background, learning an aerial act on my own was extremely difficult. It also took a very long time.

How do you motivate yourself to go through the day-to-day discipline of training?

Our route to our dreams are paved and discomfort. It’s not comfortable getting up at five in the morning to train or to ask that special someone out for dinner and face rejection or to ask for a raise. When aiming toward success we are bound to face fear, stress, frustration, anger, disappointment and a whole host of other uncomfortable feelings. Believe me. I know. I have a PhD in discomfort.

Toni Morrison wrote, “If you want to fly, you have to give up the shit that weighs you down.”

If you want to be successful and to reach your dreams then make space for discomfort. Instead of judging discomfort like an enemy, simply accept and embrace it as part of the journey. In fact, train yourself to associate the discomfort of your challenges with an outcome of success.

Don’t wait to feel comfortable to take action. Get up in the morning and do whatever it is you need to do no matter how you feel. This will make you stronger. Instead of running away from discomfort, choose your dream instead.

Can you go into more detail about the champion mindset and elite athlete habits you teach in your coaching? I assume these apply to all of us, regardless of our talents, we should still strive to be the best versions of ourselves.

I teach a host of champion mindset techniques such as creating your own launch team, emulating excellence, and simplifying your success, among others.

Regarding simplifying your success, most people don’t dream big enough. You know you’ve dreamed big enough when your dream seems impossible. But have you ever dreamed an impossible-sounding dream and then felt overwhelmed at the magnitude of how to accomplish it?

I wanted to be an aerialist more than anything, but I didn’t feel like an aerialist and I had trouble believing that I might achieve such a feat.

So I came up with a plan. I figured, if I can’t believe this ambitious dream of becoming a professional aerialist, what if I reprogram my thinking to just believe in the next step? So I converted my dream into mini-steps – and I just focused on one at a time.

I didn’t have to believe in becoming an aerialist, I just had to rent a place to train.

I didn’t have to believe in becoming an aerialist, I just had to buy two yards of costume fabric.

By breaking my dream down into mini steps, I created a momentum of confidence through incremental wins.

My point is this – whether you’re climbing a circus rope or a corporate ladder, the rules are the same. You learn to believe not by taking a huge leap, but by believing in one step after another.

Good news is confidence is learnable, and as you learn, that crucial belief takes root and spreads into all parts of your life.

If you’re intrigued and inspired by Christine’s story, or if you want to see some amazing videos of her in action as an aerialist, please check out her website. In addition to performing, she does speaking engagements, and coaches (teaching the champion’s mindset and coaching aerialists). Her book Falling to the Top is coming soon (check here for updates).

Do you have something unfulfilled inside that makes you feel like you might “burst into a supernova“? Maybe Christine’s coaching can help take the next step.