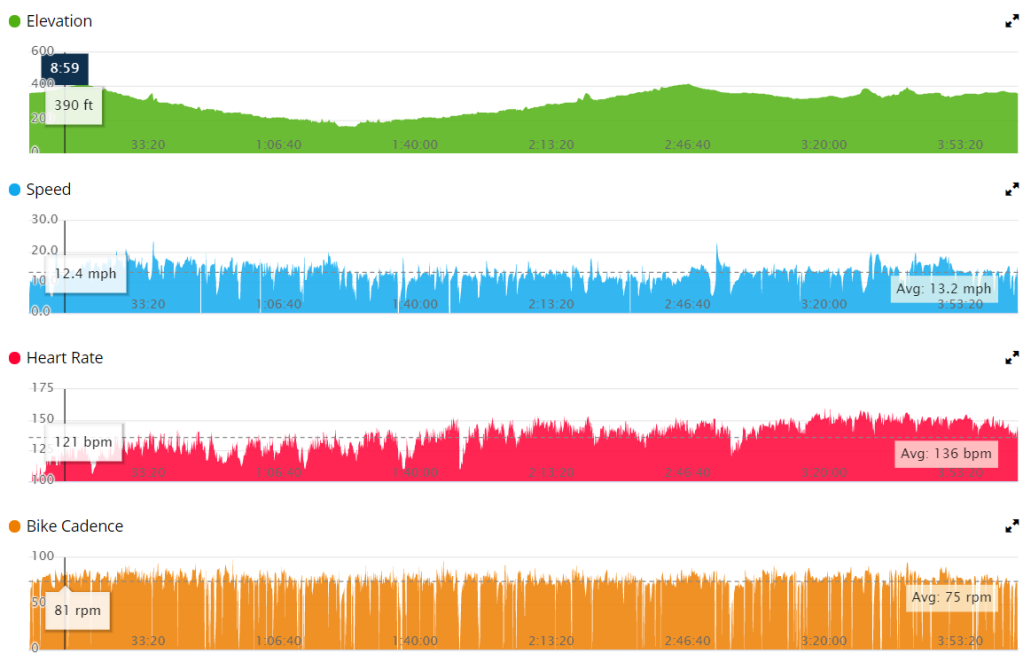 On Thursday I week ago, I did what I want to become my long, easy ride each week. This is to ramp up my time on the bike for the century in October. I rode for four hours and 37 minutes, at what seemed like an easy pace on the bike. No muscle aching so it was an aerobic pace, and relaxed pace, no labored breathing. But after about the half hour mark my heart rate started creeping up, into the 130s and later the 140s. Since I felt great, I decided to press on and just go by perceived level of exertion, which I tried to keep easy. Here is the result:

My average speed was 13.2 and my average heart rate 136 (max 151) for the main four hour part of the ride. The other 37 minutes were a warmup and cooldown that I did not track.

I must admit that I was shooting for an average speed of 13 mph. This would make for a century under 8 hours, and hopefully I could speed that up in the next couple of weeks.

Keeping track of speed made me, at least unconsciously, push the pace. As it turns out, this was a bad day to pick to do that. To avoid that temptation in the future, I have removed speed and average speed from the display of my Garmin watch . I can always check them later after I save the ride.

Later that day I had what seemed like flu-like symptoms, a little muscle aching, and a mild case of chills. By Friday I also had a slight fever (100.2 F, or 38.4 C). I had some upcoming activities involving human interaction, so I googled “covid19 symptoms with vaccine”. I also tried “covid19 delta variant symptoms with vaccine”, since that is predominant in my county. I did not have the main symptoms for either of these, which are all mostly respiratory (coughing, runny nose, reduced strength of smell, and breathing congestion). Karen also suggested checking with the health insurance nurse. I first found an pretty goo online questionnaire on the health insurance site which appeared to be backed by artificial intelligence, and it concluded I did not need covid testing. I then called the nurse to get advice from a human intelligence, and he confirmed covid testing not needed.

My major concern was that A dear friend was having her 82nd birthday party on the following Wednesday. I would have hated to miss that, but didn’t want to endanger her. Sharon, the birthday girl, is fit and one of the healthiest people I know, but still we have to give some concessions to immune system decline with age.

Fortunately on Sunday I was able to get into urgent care to see a doctor. He detected white blood cells in my urine, indicating a bacterial infection, probably a urinary tract infection. I was indeed having other unpleasant symptoms we needn’t go into that fit that diagnosis. So he put by on an antibiotic, which worked its wonders very quickly. By yesterday, one week since the first symptoms, I was pretty much 100% better. And I was able to go to the birthday party.

This was an interesting experience to go through. it definitely confirms that health is more important than fitness, and when there’s any doubt, like the elevated HR symptoms, I should back off or even cut the activity short. But it’s also interesting how we think about this differently in the time of covid. If not for covid I would have just said, “I must have caught some kind of bug” and just rested till the symptoms were gone. But covid is still there looming in the background in our minds.