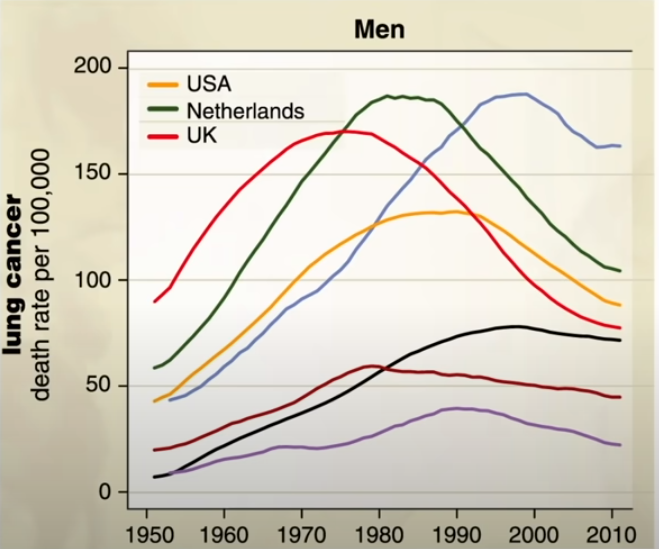 This was the title of a recent video on Dr. Greger’s website. It starts out with the depressing statistic that only about 1% of Americans reach the not overly strict dietary targets of the American Heart Association. Despite spending well over $3 trillion a year on health care, more than any other country in the world, the US has slipped to 43rd in life expectancy. And the highest risk factors come from diet, more than even smoking.

As for smoking, scientific consensus was reached as early as 1964, when the Surgeon General’s warning first appeared on cigarrette packages in the US. But lung cancer deaths, largely attributable to smoking, continued to rise until 1985, after which they finally came down significantly.

Dr. Greger argues we are in a similar situation, only it’s more like we’re back in 1964 with cigarretes. And just like there was considerable misinformation about the dangers of smoking back then, there is considerable misinformation and confusion about what the media presents about healthy diet now. From an article entitled “Nutrition Research in the Media: The Challenge Facing Scientists” [1]: “Unfortunately, media messages surrounding nutrition are often inconsistent, confusing, and do not enable the public to make positive changes in health behaviors.”

In contrast to the confusion we see in the media, there is a pretty solid consensus about what constitutes healthy diet among mainstream scientists. I described this situation in a previous blog post. The exciting news presented in the video is that there is now an organization called the True Health Initiative. From their website: “Think No Two Health Experts Agree? Think Again!”. THI is a “growing coalition of over 500 world-renowned health experts, committed to cutting through the noise and educating on only the evidence-based, time-honored and proven pillars of lifestyle as medicine. Coalition members include physicians, scientists, nutritionists and authors from over 40 different countries”.

And the consensus among these scientists is that the healthiest diet is “comprised mostly of minimally processed, generally plant-predominant foods in time-honored, balanced combinations (e.g., traditional diets of certain Mediterranean populations, certain Asian populations, etc.).The preferred beverage for satisfying thirst in almost all situations is water”, or in short, eat what the healthiest people in the world eat: the Blue Zones populations.

I should also point out that the consensus is on diet, but also on other elements of a healthy lifestyle, including adequate physical activity, avoiding smoking and excess alcohol, adequate sleep, stress relief, and social support.

Update on What I Eat and Why

Back in April I wrote a post “What I Eat and Why” and mentioned it would kick off a series of posts on nutrition as I did another dive of research into that topic. I thought I’d give an update here based on what I have learned in the past few months. Not too much has changed. I still believe in eating like the healthy and long-lived Blue Zone populations: minimal “junk” (overly processed modern food), lots of fruits, vegetables, legumes, and minimally processed grains, and a reduced amount of animal products. Many refer to this as the whole-food plant-based diet. I found that this can be shown to be a very reasonable subset of mainstream dietary guidelines, as I discussed here. And, it is good to find out this is in line with the consensus presented above.

Another thing I noticed is that there is confusion because the term “plant-based” is sometimes loosely bandied about, omitting the “whole foods” part (or, equivalently, “minimally processed”). This is a crucial mistake because a lot of unhealthy foods are plant-based, like junk foods, many alcoholic products, and French fries. The “whole-foods” part is essential. Personally, I find it even more important than “plant-based”. Occasionally “cheating” by eating a bit more animal products has less health consequences for me than “cheating” by eating junk, as the latter is more likely to trigger cravings.