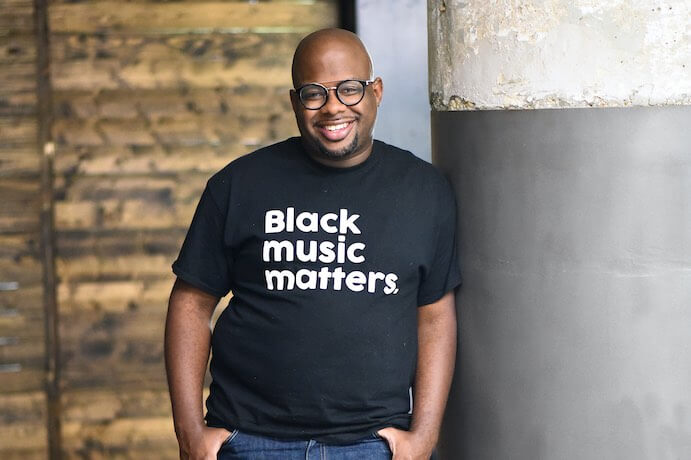 Adrian Dunn is a healer. Through his work, the Cleveland, OH native, creates a space for worship, vulnerability, and strength, which is needed in a world undergoing so many shifts and changes. We all need a place to rest, and with his project Redemption: Live in Chicago, renewal is granted. The Hopera: A Hip Hop Opera composer has no doubt had an illustrious career that only continues to reveal itself as a channel for the Black music experience, particularly with the Redemption album and the Rize Orchestra project.

Throughout his career, the award-winning multi-genre singer, composer, producer, activist, and McArthur grant recipient has worked with The Roots, Myron Butler, Smokie Norful, The Chicago Symphony Chorus, and countless others. Dunn’s present work is a beautiful reflection of his past collaborations. Redemption transposes the sounds of the Black AME church while shining a light on the Black Lives Matter movement through dedication and lyric. The Rize Orchestra project is an amalgam of sounds ranging from classical to gospel to Hip Hop. The group was founded by Dunn in 2019 as a pipeline to resources and opportunities in the music industry for collegiate musicians, all of which carries a message into the future that Black music, musicians, and lives matter.

How are projects like Redemption and Rize Orchestra shaping a new narrative in American music, particularly when discussing Black music during the era of the Black Lives Matter movement?

The work that we do with the Rize Orchestra as well as Redemption really frames the movement of Black music in the United States from a contemporary lens. Both Redemption and the Rize Orchestra album showcase a new sound in American music — or more directly, a sound that has often been ignored by the larger classical music establishment. There has not been space given to composers who write music that doesn’t exist within the Western Eurocentric boundaries of the classical music industry. Both Redemption and the Rize Orchestra project feature all Black performing ensembles, but the staff and the mixing engineers and the sound engineers and the support staff are also Black folks. It’s important that we raise the prospect of Black agency in music. The Black Lives Matter movement has shaped the last decade of United States politics and music. It is time that we have a great reckoning as it relates to the classical music industry’s willful ignorance of Black composers and performers.

There’s a heavy gospel influence throughout Redemption and in some parts of the RIZE Orchestra project. Can you talk about this influence and how it is central to the story you want to tell?

Gospel music has been a part of my life since as long as I can remember. I’m a church kid. I grew up in Cleveland, Ohio in a small Black Baptist Church by the name of Starlight Baptist Church on Euclid Avenue. This was so foundational to my musical understanding of Black music. The spirituals, the long meter hymns, the congregational singing, and learning how to teach parts and teacher choir were all things that I developed as a child growing up in the Black church. It’s important that we preserve the Black sound from the church. I believe that expressions of Blackness should be heard as they are in their most natural and unadulterated forms. My music does not conform to many of the unspoken rules of classical music composition — that’s on purpose. When people hear my music, I want them to hear my heart and to hear my soul and to hear the soul of my people. Gospel music plays such an important role in telling that story.

I noticed while each project pays homage to various victims of police brutality, it doesn’t use Black pain to drive its narrative. Instead, it appears to offer a safe place to rest and heal. Can you talk about whether this was intentional?

Absolutely this was intentional. Redemption is like a Requiem. Redemption is designed to allow all people to learn, understand, and never forget the names of each person who’s life was taken away from them for no reason, or for the simple reason of the color of their skin. This threat to justice is something that we cannot be silent about in the music industry. The years of displaying Black trauma on the opera stage as well as in the concert music repertoire needs to end.

I write for my people. I write stories about Black people because our stories must be told even in classical music and predominately white spaces. To put it plainly, Redemption is a concert work that allows Black people to feel safe no matter how we feel even in a concert hall, where for so long, we have been told we do not belong. The music provides comfort, safety, healing, and a celebration. Adrian Dunn–Photo courtesy of the artist

How does the influence of spirituals factor into this process of healing through music?

Redemption is telling stories that are very hard to tell, stories that are horrible and reprehensible, but what Redemption embodies is a duality in Black music. We see this duality played out in spirituals so many times. There is always going to be a celebratory moment in the music no matter how difficult the subject matter is. By using the spiritual as the modality to tell the story, the audience is able to see this long arc of history that does not always bend towards justice in the realities of Black Americans. It doesn’t happen that way for us.

What was it like recording Redemption Live in Chicago? It sounded and felt deeply spiritual and personal.

For people who know me, I often say that music is the Holy Spirit. When you sing these Black sacred texts, they have power. There is a spiritual connection between my ancestors and the words of the songs because the words of the spirituals are continuing to teach us and mold us to this day. Every word of every song has power. As I said during the performance, when we stand here and sing these words, we stand with our ancestors and with the power of every Black soul that has come before us.

The Redemption recording at the Chicago Temple was life-changing for me. I know it was life-changing for those in the audience. When people hear the Adrian Dunn Singers, there is no doubt that something in them has changed at the end of the performance. To present this music to the world with an all Black orchestra and all Black vocal ensemble was a dream come true for me. Dreams do come true, even for Black boys from Cleveland, Ohio.