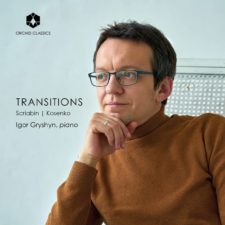 Imagine that you’re in the mood for some late 19th/early 20th century Russian piano music, and you can’t decide between Scriabin or Rachmaninov. My solution: check out the Eleven Etudes Op. 8 by Ukrainian composer Viktor Kosenko (1896-1938), whose fluidly idiomatic keyboard craftsmanship reveals both masters’ influences.

Indeed, the Etude No. 2 in B-flat minor rips off Scriabin’s Op. 8 No. 11 Etude in the same key, while No. 7 in C major owes its very existence to Scriabin’s C major Prelude Op. 11 No. 1. Rachmaninov’s lavish harmonies and sterner demeanor decidedly inform No. 10 in C-sharp minor, not to mention the swirling patterns throughout No. 5 in the same key. And what about that tinge of Gershwin in the final E major Etude?

In any event, Igor Gryshyn gives us the second complete recording of the entire Op. 8 Etude set. In most respects I prefer his performances to those of Natalya Shkoda (Centaur) for his generally lighter, suppler touch and faster tempos, although Shkoda’s deliberation gives more space to the inner voices, and her bass lines are more to the fore. On the other hand, Gryshyn’s nuanced and expansive way with the four Scriabin Op. 22 Preludes differs from Maria Lettberg’s faster, more straightforward renditions.

In Scriabin’s Fourth sonata, the promise of Gryshyn’s lyrically sustained introduction is let down by his rather literal and rhythmically stiff second movement; compare the palpable tension and release expressed through Mikhail Pletnev’s teasing flexibility, the churning energy of Anna Malikova’s recording, or Marc-André Hamelin’s quicksilver articulation, and you’ll hear what’s missing. Acquire this disc mainly for the Kosenko Etudes.