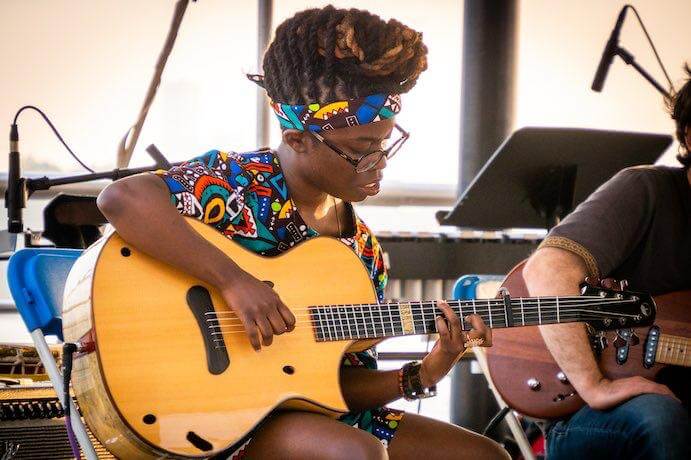 Contemporaneous returned to live performance on Wednesday, July 21, 2021 with spectacular ease. “After the Storm,” presented outdoors in Manhattan in collaboration with Hudson River Park Trust at Pier 64, brought an effortless and elegant program to the 130+ attendees spread across the lawn. The program’s broad sweep of musical styles was modulated by fading sunset light, with Freedom Tower in the distance and a strong river breeze.

Seven of Contemporaneous’ 23 members performed throughout the evening, joined by soprano Elisa Sutherland and Yasmin Williams on guitar and kora. Williams is an acoustic fingerstyle guitarist, and “After the Storm” presented three composer arrangements of her tunes, which made for a perfect summer program and lightened the mix of other offerings that included heavier topics. Williams plays pleasantly humming and attentive music loosely in a folk tradition. This was her first time collaborating with new music composers, and the three different world premiere arrangements from Ian Gottlieb, Zachary Ritter, and Lucy Yao preserved Williams’ sunny sound while extending her range through contrast. Yasmin Williams in Contemporaneous’ “After the Storm”–Photo by Russ Rowland

In “After the Storm,” the titular song arranged by Williams and Lucy Yao, electric guitar and strings texturized Williams’ breezy guitar playing; synth popped through the mix as the sunset broke through clouds. “Sunshowers,” arranged by Williams and Zachary Ritter, turned to gently rocking rhythms and bare structure, with some driving pop piano to foil Williams’ relaxed vibes. The whole ensemble was well amplified, and even though the strings were loud, Williams’ fingerpicking cut through the mix nicely. In her program notes, Williams noted that both songs symbolized express hope for the decade and for America despite the racial and pandemic challenges we faced in 2020. It was perfect music to both reflect and look ahead: pleasant, meditative, energized.

“I am complicit / Children in cages … is it ok to fall in love at a time like this? / I didn’t do anything to deserve the world.” Elisa Sutherland in Contemporaneous’ “After the Storm”–Photo by Russ Rowland

Williams returned to transition the mood with two more songs, including a solo encore. “Urban Driftwood,” an arrangement with Ian Gottlieb off her latest album, showcased her original playing technique and juxtaposed Williams’ artistic connection to nature against the urban performance setting. With minimal harmonic changes and repetitive figures, Williams prepared the audience for a final reflection.

Alex Weiser’s and all the days were purple closed the program. This Pulitzer Prize 2020 finalist unfurls delicate string and piano around Yiddish and English poems that consider spiritual longing within the tragedies of life. Two of the seven movements are instrumental, and the intermittent absence of words creates a rich space for contemplation. Weiser’s elegant music and the work’s delicate spirituality were unfortunately spoiled by ambient noise drama — helicopters, increased wind, and a Hudson River fireboat overpowered Sutherland’s valiant vocal dedication — but the work was still potent enough to demand further performances where the nuance can be savored and Yiddish heard. Contemporaneous presents “After the Storm”–Photo by Russ Rowland

“After the Storm” promised to celebrate the power of live music and foster shared community, presenting “both the transcendent and testimonial powers of musical experience.” It did just that. The program offered a cathartic communal setting to consider pandemic experience and broader social topics, but it did so with a breathtaking lightness of touch. The audience was able to reflect, absorb, and delight through music perfectly tailored to its environment. “After the Storm” — free to the public, marvelously unassuming, partnered with a local organization, and gender parity of composers and performers — shows that Contemporaneous is internalizing lessons of the pandemic and leading new music toward its better self.