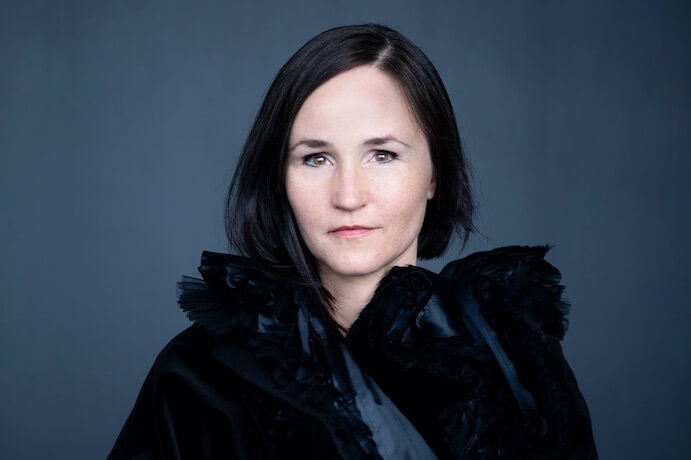 Icelandic composer Anna Thorvaldsdóttir is known for creating soundscapes that unfold at a glacial pace and evoke the volcanic grandeur of remote corners of the Earth. But in her first string quartet, Enigma, she aims for the farthest reaches of intergalactic space, albeit in a smaller, introspective setting.

The audacious and innovative Grammy-nominated, Chicago-based Spektral Quartet co-commissioned Enigma with Carnegie Hall and Washington Performing Arts and gave the premiere in 2019 at the Kennedy Center. Spektral members Maeve Feinberg and Clara Lyon (violin), Doyle Armbrust (viola), and Russell Rolen (cello) return for the world premiere recording of the quartet, out August 27 on Sono Luminus.

Enigma — the piece and the album — feels like a desolate netherworld of slowly creeping cries and murmurs, at times like an out-of-body trip beyond the confines of time. Armbrust, a self-described zealot of Anna’s music since hearing her 2011 debut album Rhizoma, points out the “dichotomy of desiccated bow clicks and sweeps and the rich, sonorous journey of the chorale-like writing” in his notes. The clicks and sweeps are just two of Anna’s mostly unpitched techniques with which she chisels out the substructure for the chords that emerge and later intertwine with the many scratches, hisses, and high-pressure grating sounds over the 28-minute, three-movement piece. Anna is meticulous in her notation and exhaustive in her performance notes. Pitches are to be “carried with a strong sense of depth and projection,” for example. In certain passages, the players are to apply more pressure than usual on their bow strokes, but “not so much that the flow is disturbed or that the sound becomes too aggressive or too scratchy, but rather subtly distorted, similar to white noise.” Anna also specifies that the ensemble is to be amplified in live performance, with reverb added. In the recording, sound engineer Daniel Shores picks up every col legno bow stroke, airy effect, gently buzzing overtone, and echoing string snap.

A crawling, leaden pressure on the strings creates the white noise at the beginning of Enigma, like a raspy, pitchless and formless molten state from which something must be created. That something is an unstable block chord — what Armbrust calls the “chorale-like writing” — that appears and later returns, dovetailing with the white noise. Spread out among dissonant intervals that include major and minor 13ths, the harmony swells and recedes with unison bow strokes from the full quartet. The execution with no vibrato makes for a chilly sonic atmosphere.

The brooding chord later progresses in stepwise motion and is interspersed with intimate, yet unsettling inklings of rustling leaves, papery textures, and whispery swooshing winds that evoke a prehistoric barren landscape. The shifting textures suggest a recurring change of perspective through Enigma, allowing the listener to traverse incorporeally from interstellar dust at the dawn of time to today’s melting polar ice caps. Later in the movement, the tremolo bowing sounds like a distant pulsar beaming across unimaginable distances, with an electrified spark. Spektral’s execution is so microscopically precise that it gives it a voltaic momentum. Fingernail pizzicatos — indicated in the score — create an electronic-sounding clicking that contrasts heavily with the more conventional writing. In the faster second movement, Anna takes us to a ghost town of whines and whimpers from the strings. The spookiest sound is a recurring languid and wispy high-pitched glissando that Anna describes in the notes as a “ghostly effect of various harmonics as the fingers slide down the string.” Spektral Quartet makes it sound like a sighing lamentation from a transcendental being. After more slowly grating noises from the low strings and evanescent fragments of melody, the gloomy chord from the first movement returns. Toward the end of the movement, the unison strings create an insectoid buzz.

But this is no mere collection of eerie sound effects — Enigma evolves as the mysterious noises gradually blend into the chordal structures. In the third movement, particularly, multiple layers of sound spin centripetally into harmoniously stable grounds, only to ebb away at last into the pitchlessness of the opening. With that deceptively simple approach, Anna upends the string quartet genre and takes the listener on a nearly psychedelic trip into the unknown.

And yet, what is most disquieting about Enigma is that its most harrowing and despairing moments — contrasted by those elusive, not-so-consoling chorale progressions — make the listening experience uncomfortably familiar in our time. Whether a dirge for the countless Covid-related deaths that could have been avoided, or for the depletion of our natural resources, it is a death knell for the 21st century cast in a centuries-old musical form. Listen with the lights off.