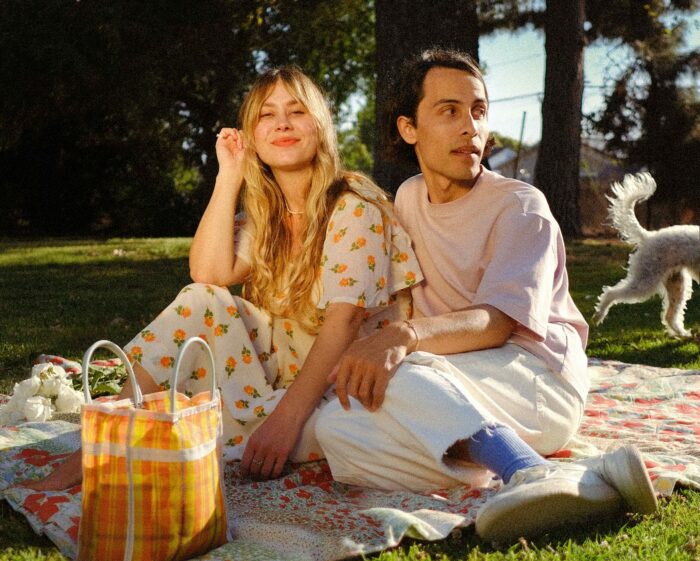 Sun and Settled Days is the sophomore effort by indie pop duo Pageants— a record that tackles the highs and lows that have enveloped bandmates and partners, Rebecca Coleman and Devin O’Brien’s, creative and romantic journey. It follows a soundscape balanced between sunny mirth and melancholy, providing a fleshed-out project that’s just as easy to listen to as it is to emotionally explore.

The electric opener, “Just Tell Me,” gives way to high tides of surf-pop. It’s an instant ear worm, falling back on the fun and casual elements of a good pop song. Elsewhere on the record, “Getting Real,” hits a rock-ier stride, relying on red-hot guitars and strong, present drums. Then there’s “Stars,” a laid-back, acoustic tune that reigns in the feverish momentum that the rest of the album fuels. It eases into fragile vocals and an enchanting melody that almost feels too tender to touch. It features interesting use of reverb as well, making it difficult to not come back to this track time and time again.

Yet, the two highlights of Sun and Settled Days are “Where Did the Time Go?” and “No, Not Okay.” The former explores a country-pop foundation— feeling right for a track that acts as one of the most personal on the record. The lyrical content focuses on dismissing the negativity that can harbor after being in a toxic relationship— a sense of freedom that comes from unlocking the shackles their words had over you. This darker undertone is laid overtop an upbeat soundscape, a common theme that envelopes many of the songs on the record. “No, Not Okay” bleeds into this. Its edges are upturned with sadness even though it has a golden, airy tone throughout. Both tracks leave enough residue that will have one thinking of them hours after the record’s end.

It’s in Pageants’ skillful ability to seamlessly marry brighter music and darker lyricism that causes Sun and Settled Days to resonate with the listener. Not just an album full of superficial pop songs, it has layers that range from heartbreak to insecurity to love to liberation that gives complexities to the group that wasn’t necessarily found in their debut LP. After just one listen, there’s a sense of catharsis that blossoms— a relief and a piece of humanity that is hard to capture. Sun and Settled Days can be a record that is flipped on during a summer road trip or spun late at night, exploring waves of emotion. Either way, it’s in this juxtaposition that, ultimately, brings Pageants their most cohesive and authentic work to date.

I was able to sit down with the duo to talk about Sun and Settled Days where we discussed the idea of records that sound lighter in spirit when tackling darker themes, the difference in recording this album in a home studio, and what they consider their favorite “classic single-mom songs” and more below:

The Alternative: You guys have hailed Sun and Settled Days as an album of brighter days and liberation. What was the process like creating a record with such a golden and cathartic undertone to its theme?

In the moment, making the record was just something we felt like we had to do. I almost see it like writing in a journal after a major event. You put your ideas down because it’s the only thing you can think to do, but reading that entry in hindsight can be really illuminating. Dealing with the themes on this record and just getting to the point where we felt like we were actually going to complete it played a big part in feeling a bit more optimistic about the future.

Do you think it’s important to have albums that sound lighter in spirit— especially coming out the other side of a pandemic? Not just for you but for those listening?

Absolutely. That’s something that I’ve always been conscious of when I’m writing. I really want certain songs to sound and feel Good! I think we could all use a little pick-me-up these days and I’m always pleasantly surprised when I come across new indie music that feels light and pop-forward as opposed to some of the more emo stuff that’s circulating these days. I have a playlist called “Best Day Ever” (it’s not public, sorry! Maybe one day when I really lock it in) that has all feel-good music for when we’re driving to the beach or heading out on a fun road trip. It’s a lot of old school reggae and vibey, mellow tracks mostly from the 60’s and 70’s.

Even with the more joyful soundscape, there is darker lyricism that seeps into the record from some of your past struggles and trauma. How does that contrast of brighter music and darker words feel while creating songs?

This kind of juxtaposition really resonates with me. Having a nice, lovely melody paired with some wonderfully devastating lyrics is my M.O. It’s almost like dark comedy, which I love. I don’t journal much, if ever, so I do a lot of venting through my songs and lyrics.

What was the process like recording this sophomore record in your home studio? Were there any major differences between it and your debut Forever?

I think the biggest difference was just having a bit more wherewithal in the process. We were really new to the world of recording when we started Forever but Devin has since made a bunch of records and is a great engineer and producer.

You guys have been in each other’s lives since you were in high school— experiencing the highs and lows of youth and growing up. Do you think your relationship and comfort with one another impacts the music you make together and how you go about creating that music?

I think that growing up in the same area and having known each other since high school has informed a lot about us as people and as musicians. I remember listening to The Shins’ Chutes Too Narrow in art class with one pair of iPod headphones shared between the two of us. We didn’t start dating until after I graduated, but I feel like we’re really lucky to have had that ‘high school crush’ dynamic because it makes our relationship feel nostalgic in a lot of ways. I write mostly on my own, but our shared history has definitely put us on the same page musically which I’m really grateful for.

“Where Did The Time Go?” is definitely a track I keep finding myself coming back to. It feels like a release in many different ways. How did it feel to pen that song, specifically, and see it come together?

When I wrote it, I was thinking a lot about my past and feeling pretty stuck. I used to be in a relationship with an old bandmate in high school who also happened to be a really toxic person. They used to tell me really negative things about my musicianship and wouldn’t really let me have much input in the project. In writing “Where Did The Time Go?” I was attempting to reject all of that and the last shroud of negativity I was harboring. The demo for this was just me and my guitar and was way faster with kind of a punky vibe. Devin made a version that was slower with a lot more synths, which I loved, so we split the difference in production and came up with what you hear on the record!

I’ve read you were both raised by single moms and draw on music inspiration from the artists that were the soundtrack to your youth including what you consider “classic single-mom songs.” What’s your absolute favorite song from this dubbed genre?

To me, the most quintessential single-mom song is “Where Have All The Cowboys Gone?” by Paula Cole (1996). I remember listening to this a bunch with my mom as a kid. I thought it was pretty great, but I definitely didn’t quite pick up on the irony of the lyrics as a five-year-old. Neither did a lot of listeners at the time as far as I understand. I love this song so much and I’m so impressed that she produced it herself and chose to record it sans bass! We stan! Side note: This is one of the funniest karaoke songs to do in my opinion. Just sayin’.