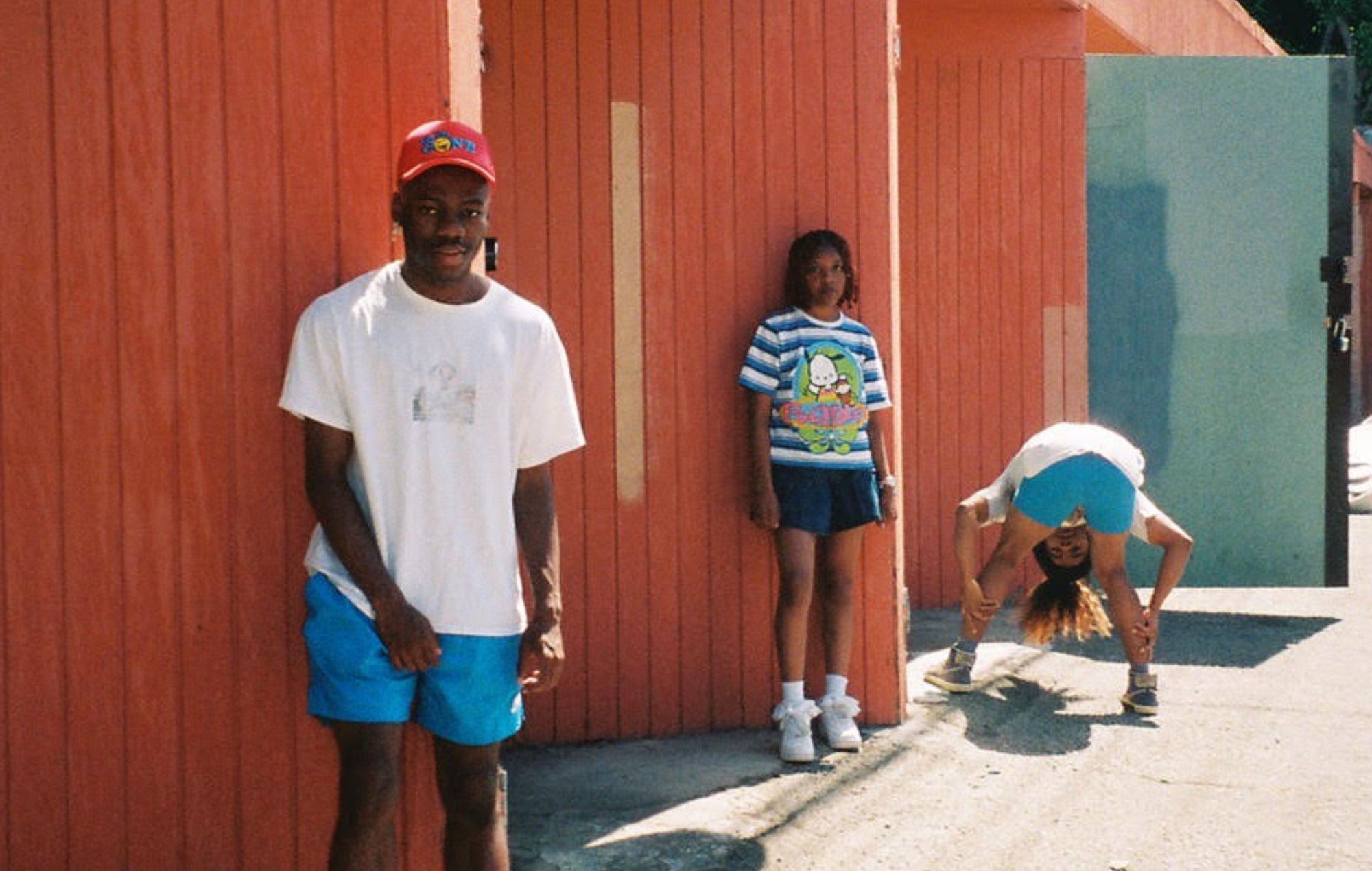 The first song on BLACKSTARKIDS’ 2019 debut project, ‘Let’s Play Sports’, is a galvanising introduction. The genre-exploding trio’s kitschy, high-fructose pop hooks are there on ‘MTV’, buoyed by their back-and-forth flow and animated production quirks. But then they unload their future-ready mission statement, which still stands up two years later: “They gonna play these songs on MTV/We gonna die rich”.

It’s exactly the message you take away after an hour with the alt-pop/rap collective, comprising rapper Ty, alongside producer Deiondre and vocalist/rapper Gabe. Dialling in from their tour van while en route to Philadelphia (they are currently on the road with Glass Animals), the pals blast personality over a fairly wobbly Zoom call, talking the way that they perform: fast, free, and full of youthful vitality.

And to help illustrate what it means to be currently chasing their shared dream – “to be recognised as one of the greatest bands of all time” – Ty stares directly down the camera. “In the future, we want to be talked about with the greats,” he says, without breaking eye contact. “We are one of the freshest, most creative bands to ever do it.”

Nowhere does this winning ambition shine brighter than on BLACKSTARKIDS’ inventive records. As an incredibly tight-knit friendship group, creative outlet and MGMT fan club all at once, the trio have made music together throughout their formative years, exploring teenage feelings in their rocky, emotional glory across three extended releases: the aforementioned ‘Let’s Play Sports’, followed by 2020’s ‘Surf’ and ‘Whatever, Man’, which dropped later that year. This group of relentlessly questioning and curious minds finds “joy and a sense of therapy” in putting out new music in such quick succession, and rather than sticking to a strict conceptual framework, they allow each project to bristle with ideas under the surface.

Throughout our conversation, they repeatedly liken their group dynamic to Beastie Boys’ larger-than-life camaraderie, and explain how they’ve developed a “near-instinctual” understanding of when to leave space for each other in songs. “We’re so comfortable with who we are as a group that, artistically, nothing feels off-limits,” says Deiondre. “Our music doesn’t really follow any trends; it’s not defined by the sound of the current climate because we’re never focusing on what’s popular at the moment.”

He recalls how they met via social media: “When we started out, I realised that I had found friends that are just as serious about wanting to do music as me. I needed these people. We all just knew that we wanted to change our fucking lives – and we wanted to do that together.”

BLACKSTARKIDS did not hurtle out of the gates. They spent years balancing the band with their respective personal lives in Kansas City, studying, listening to Missy Elliott and Britney Spears, watching their peers become successful. But two things were happening: they were becoming as “close as family”, and unbeknown to the trio, piquing the attention of Dirty Hit – the same label that houses their heroes, The 1975, alongside Beabadoobee and Wolf Alice, among others. One day, the former’s Matty Healy reached out via Instagram: “We literally felt like we were floating on clouds when he said he liked our band,” says Ty, laughing. “I said to the others, ‘What the fuck? This is insanity!’

“Matty is awesome,” continues Gabe. “But importantly, he’s not assuming; he wouldn’t give you unsolicited advice, and he doesn’t put himself in any role that you wouldn’t ask of him. He’s an incredibly supportive person.”

The trio’s debut album proper, the appropriately bold ‘Puppies Forever’, is the result of this career-changing record deal. Its 12 tracks shift between heart-pounding pop anthems and glitchy rap experimentation, tussling between a mutual fear of growing up (“I can’t be a puppy forever,” notes Ty on ‘I Hate Being In Love’) and wanting to leave your past behind in order to move forward into the unknown. They channel their anxieties into these riveting, unpredictable songs.

BLACKSTARKIDS have always had an unusual way of working: each project starts with a  “visual concept” before any beats have been produced, or any lyrics have even been penned. So they admit that having to adapt to working with a wider team – as they have with Dirty Hit – was difficult to accept at first, especially as releasing their music through their self-run label, Bedroom Records, was all they’d ever known.

“We had to learn how to share our ideas with people outside of our circle,” explains Ty. “It took some time to figure out the communication styles of the people that we’re working with, but it’s a balance, and we knew we’d made the right decision to sign with them on that very first day.”

T he trio, like so many of their age-mates, have lost out on so many formative milestones and opportunities over the past 18 months. But they’ve endured. Part of this is a focused, very conscious determination for their message of inclusivity to reach those who need to hear it: “Despite all my problems I turn those into songs/Then I play for them world hoping the Black kids will listen/Trying to boost their confidence,” sings Gabe through pitched-up vocals on ‘Clueless America’.

But even when you take the pandemic’s ongoing challenges and burdens out of the equation, at the heart of so much of what BLACKSTARKIDS talk about is an underlying desire for normality. Though when you’ve been a musician for most of your teenage years, and have dreams as massive and all-consuming as theirs, there’s barely such a thing. For the group, however, their fierce loyalty to one another – and by extension, their fans – is what has kept them grounded and present.

“You never know where life is gonna go,” Deiondre quietly posits, before turning to face the other two. “And also, as you grow up, so do the people around you – so how many of those connections are you going to be able to keep?”.

A thoughtful pause fills the van. It’s a pensive moment, until Ty blurts out a playful “ha!”. “But whatever happens, all of us already know that there will never be another BLACKSTARKIDS,” he affirms. “Now we’re just waiting for the rest of the world to see that.” Over to you, MTV.

BLACKSTARKIDS’ debut album ‘Puppies Forever’ is out on October 15