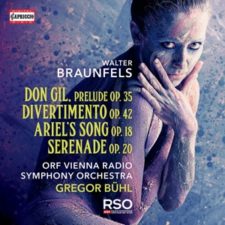 Forget about the creepy cover art. It must be a sign of persistent sexism in the arts industry that photos of tortured women adorn CD covers willy-nilly, often for the most pointless of reasons. The music on this disc is overwhelmingly light, charming, even comical, while the photo is an expressionist nightmare. What gives? There’s no reason for it other than, perhaps, a certain German fondness for taking simple things and trying to make a provocative, Major Statement out of them.

But seriously, look at that photo, and consider the titles of the works on the disc: Prelude to Don Gil of the Green Breeches, Divertimento for Radio Orchestra, Ariel’s Song (after Shakespeare), and Serenade in E-flat major. The music promises an easy, entertaining ride, and that’s exactly what it delivers, not the lunatic ravings of a naked, paint-smeared spook queen. That Divertimento is the real discovery here: an absolutely delicious bon-bon evocatively scored for a small orchestra including two saxophones, used with effortless freshness and not a shred of fin-de-siècle decadence (fun though that can be).

Both the Serenade and Ariel’s Song date from 1910, fairly early in Braunfels’ career (he was 28), and if they lack the individuality we find in his more ambitious later pieces, they certainly fall gratefully on the ear and deliver exactly what they promise–a bit of light relaxation. The “song,” by the way, is a lyrical orchestral piece, and not a not a vocal work. The Don Gil prelude offers six minutes of comic opera fun. Apparently the opera itself, composed in 1921-23, was a failure, but from such failures have come many appealing concert works, and here is one.

As with previous releases in this series, the fine performances under conductor Gregor Bühl have all of the conviction and commitment of a true believer in the cause, and the sonics are excellent. Thank goodness the music has nothing to do with that cover art. Don’t be fooled. This disc will appeal to music lovers of all ages. Strongly recommended.