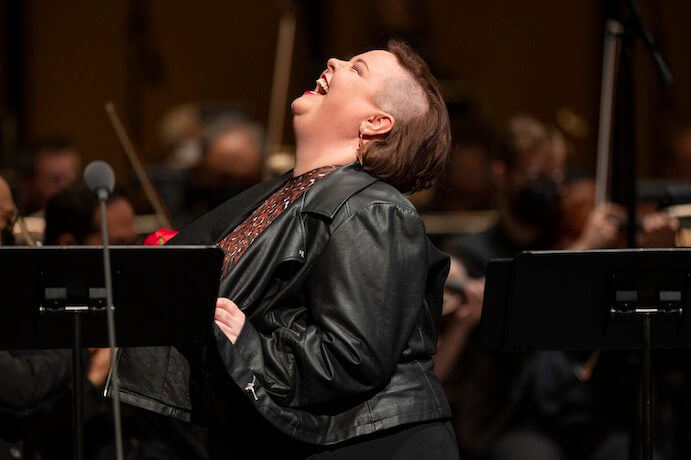 Bizet’s Carmen has captivated audiences for nearly 150 years. The thrill of a love triangle paired with brilliant, timeless music and scoring flexibility — and of course, the dashing Carmen — has allowed for decades of adaptations from Carmen Jones on Broadway to Carmen on Ice, and even Carmen: a Hip Hopera starring Beyonce.

On September 16, 2021 at the Harris Theater for Music and Dance, Chicago Opera Theater premiered a new semi-staged production of Carmen starring Jamie Barton (deemed “Opera’s Nose-Studded Rock Star” by the New York Times) as Carmen and Stephanie Blythe (renowned mezzo-soprano, turned tender dramatic tenor in her drag persona Blythely Oratonio) as Don José. The programming also included two panel discussions: What the Fach? (virtual) on August 31, as well as Close-Up with Carmen, hosted in-person by Center on Halsted on September 9. These discussions served as a much needed reminder that marrying sex and gender to voice type is only impeding opera as an art form. Blythely Oratonio, a heartfelt and humorous Pavarotti/Freddy Mercury lovechild, is the living embodiment of this fact. In Close-Up with Carmen, Chicago Opera Theater provided a fascinating crash-course history of cross-dressing in opera and aimed to explore the ways in which the operatic world could learn from drag culture. Pop culture has grown to know and love unabashed queer performances a la RuPaul’s Drag Race and the 2019 Met Gala’s theme, “Camp: Notes on Fashion.” Unfortunately, the importance of queer, drag, and ball scene culture was largely missing from the panel discussion, which instead primarily focused on opera’s history of pants roles, castrati, and cross-dressing. It was also disappointing that the panels did not include any BIPOC speakers, especially considering the history of trailblazing Black and Latina activist drag queens like Marsha P. Johnson and Sylvia Rey Rivera.

Close-Up with Carmen ended with an unbridled operatic drag performance of Handel’s “O ruddier than the cherry” by bass-baritone John Taylor Ward, teeing up the opening night of Carmen with cyclopean realness. However, despite the progressive ideas framing the pre-performance conversations, Chicago Opera Theater opted for a more subtle approach to challenging outdated (and often sexist and xenophobic) Carmen interpretations. Blythely Oratonio didn’t strut across the stage in anything close to his usual eighties glam rock get-up, and instead was outfitted in a simple black blouse and trousers — an unexpected choice, but one that, while not seemingly drag-inspired, was purposeful. With few props, orchestra in full view, and minimal set design, dressing the cast in all black costuming redirected attention away from artifice and back toward the heart of this well-loved classic: musical storytelling. Carmen too entered not in the iconic red dress, but instead sporting a black leather jacket, slacks, and a fiery attitude to match. Carmen even had an opportunity to reconsider, holding a red dress in her hands before quickly throwing it down, forgoing this overdone symbol altogether. As the orchestra kicked off the “Habanera,” she revealed beneath her black leather jacket a sheer top and black bra — a rebellious and fitting outfit for today’s Carmen. This choice tipped a hat to Carmen’s unrelenting honesty, holding nothing back and keeping no secrets. The orchestra executed the iconic “Habanera” with both power and great sensitivity to Barton’s musical artistry, giving her room to fully embody Carmen’s fiery spark and playfulness.

In “Parle-moi de ma mère!”, it became abundantly clear that Blythe’s one-of-a-kind dramatic tenor finesse suits Don José excellently and is testament that there is room for unique and unusual voice types in the operatic world. Her lower register resonates rich and amber-toned; her higher range soars effortlessly, unlike any French tenor Don José before her. The flexibility of Blythe’s voice grants the role a newfound tenderness and vulnerability, challenging the bravado and swagger of Don José’s of the past. The power of this interpretation was ultimately held not in borrowed drag elements, but instead in the way it stripped away unnecessary frills to make room for the music and story, heightening moments like Escamillo’s “Toreador Song,” a brazen bring-the-house-down performance by bass-baritone Michael Sumuel, as well as a move-you-to-tears “Micaela’s Aria” from lyric soprano Kimberly E. Jones. Rather than resting on tired archetypes of old or heeding to tradition for tradition’s sake, these deliveries were believably unbelievable, and most importantly, human.

The show’s tragic finale was met by a well-deserved and raucous standing ovation from the house, proving there is so much more space in opera for representation and re-interpretation than one might think. Chicago Opera Theater’s reimagining of Carmen was truly enjoyable and made some compelling choices, even if the performance did not fully reflect the contemporary topics discussed in the panels. May future stagings of Carmen be empowered to not simply push the envelope, but to give it a good-old-fashioned shove.