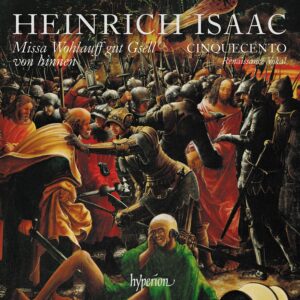 While not as famous today as Josquin, Heinrich Isaac (1450-1517) was a contemporary and rival much esteemed during his lifetime. The main work programmed on this recording, Missa Wohlauff gut Gsell von hinnen, makes an explicit connection between the two composers. Comment peult avoir joye?, a monophonic chanson also set polyphonically by Josquin (included on the CD for comparison’s sake), was the subject of a paraphrase mass set early in his career by Isaac. Later, when Isaac was in the service of the Habsburg Emperor Maximilian I, the composer discovered a contrafactum text of the song in German, Wohlauff gut Gsell von hinnen. With this in mind, Isaac decided to revisit his earlier mass and greatly expand and elaborate it. The result was one of the most extensive and imposing works of his career.

A six-voice setting, subgroups thereof appear frequently, and the same reduced scorings seldom recur adjacently, creating a wide variety of textures. The male vocal sextet Cinquecento sings with impressive resonance, rendering the counterpoint with clarity, phrasing with sensitivity,  and tutti passages with sonority. They adopt flowing tempos that befit the overlapping lines, particularly those in canon. Missa Wohlauff is a tour-de-force of a variety of canons:  intervallic, proportional, 4-ex-2, and 3-ex-1 (two of them used in the Agnus Dei to end triumphantly).

The recording also contains a half-dozen motets: some of Isaac’s finest. O decus ecclesiae has a tenor built out of the white note, or “natural” hexachord, that subtracts and replaces notes throughout the piece, creating an intricate structure out of initially simple means. The motet is formidably scaled, in excess of twelve minutes in duration, with melismatic upper parts, thickly scored tutti, and a subterranean bass line. The second half moves in a sprightly three against the steady tenor. Recordare, Jesu Christe has a canon in the middle voices and overlapping rhythms in the others that prevent the procedure from being obvious; it closes with a hushed cadence of considerable beauty. Judea et Jerusalem may be by Obrecht, another member of the Josquin generation who deserves more attention today, instead of Isaac. A responsory from the Christmas Vigil built up from the chant in the bass, it consists of imitative counterpoint in long phrases adorned with sumptuous verticals.

Cinquecento’s recording makes an eloquent case for Isaac as a composer of the first rank. Recommended.