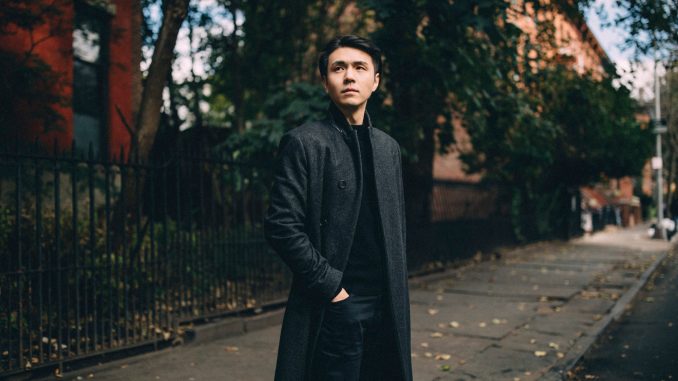 Francis Hon has just released a studio album filled with classic piano works. Beethoven, Bach, Liszt — it’s all in there.

What can also be found in the album is Francis’ interpretation of this music, which is influenced by his love of jazz.

Francis recorded the works on his new album Dusk about 10 years ago, and back then he was “a pure classical pianist”. He’d grown up playing classical music since he was just 6 years old, and in 2011 travelled from Taiwan to the United States to study his doctorate in piano performance.

But Frances had always enjoyed listening to jazz. As time went on, he felt moved to enrol himself in a masters program at New York University. He co-founded the World Jazz Quintet, performed in Steinway Hall and the Williamsburg Music Centre, and released successful debut album Before Dawn flooded with his original compositions. The rest is history.

Speaking of history, it’s within this context that Francis has chosen to return to his earlier classical recordings and release them as Dusk. Now reflecting on these recordings, he tells us how they were played “with a jazz heart in the ears” — and how beautiful it can be to embrace both styles.

Francis, congratulations on your studio album! When I read of the composers featured on this release — from Bach to Beethoven — and then learnt about your performance approach, I was surprised. You have a classical background, but you’re a jazz pianist. I have so much to ask you about, but firstly, the most obvious: Why did you want to record an album of purely classical compositions rather than jazz works?

Thank you, Stephanie! This album is recorded before I officially learnt jazz. I was a pure classical pianist at that time, listening to a lot of jazz music. But didn’t know how to play jazz at all until I came to United States. [So when] I finally had an opportunity to learn jazz, this recording was basically archived for 10 years.

I tried focusing on jazz and separated myself from classical music, because jazz was so hard. It was quite successful, and I almost forgot that ‘classical’ mind. I was so happy to be able to dive into jazz music for another few years — and then pandemic came.

Everything slowed down because of lockdown. Then I recalled this recording, and gave it a spin.

It was like a time machine and catch-up with the ‘classical’ me. Because of my jazz training, I heard so many things I’d never heard before — even though it’s the same recording! This brand-new perspective made me decide to release it.

Let’s take a step back, now. You have an extensive background in classical music. In your liner notes, you describe that you felt a “huge conflict” between jazz and classical when you were first studying. How did this conflict affect your approach to music and the way you would play back then?

As a performer, the feeling between these two music genres is different: classical is forward, whereas jazz is much more laid-back.

When we say jazz is ‘relaxed’, that means the vibe it provides. But the timing and rhythm of jazz are very strict.

I would say when speaking of timing, classical is more relaxed and organic because you can always be flexible. And it’s not the priority when performing classical music, because no one wants to sound like a metronome. However, timing is essential in jazz, and you must have every note consistently fall into the time grid to sound authentic.

I remember one semester in my doctorate, I played Brahms Trio in A Minor, Op. 114; taking jazz at the same time. Interestingly enough, you would know which genre you practised more than the other through the comments you received. For instance, in a jazz rehearsal, I was criticised for my unstable timing on improvisation because I practised a lot of Brahms during the week; when in a lesson of coaching Brahms, my professor had to push me so hard to stretch the time, otherwise it would sound too rigid. And later, I realised I’d played too much jazz recently.

This conflict affected my approach, and it was a challenge to prioritise the time and consciously switch the feel in my early years of learning jazz.

So why did you want to persist — to keep maintaining your passion for both classical and jazz simultaneously, even when that might have been an enormous challenge?

To be honest, there were a few years I only listened to and played jazz, no classical music. Then I started teaching and became acquainted with classical music again. I remember playing Chopin Ballade No. 1 and No. 4, and noticed some familiar jazz chord progressions, and I re-learnt their beauty from another side as well! This moment made me want to pick up classical music again.

In classical music, every note was written and polished by composers, so we would easily take it for granted. But the jazz background taught me to appreciate the meanings behind those notes when playing classical repertoire.

Though we exist in a fairly post-genre world, there are still very clear divides between the classical and jazz streams. That divide is not often crossed so overtly. And even more than that, it’s often met with judgment or stigma on either side. What are your thoughts about this? Why do musicians so often place classical and jazz in competition with each other?

It would take years to internalise one genre for one performer — either classical or jazz. And that might explain why the divide is not often crossed overtly. Plus, both music genres are not mainstream in music industry, and audiences are more specific: they may prefer hearing it in an authentic way rather than crossover.

There is also great music successfully incorporating jazz elements into classical, and vice versa. I feel this kind of music provides a perfect example showing how we can adjust the ratio between jazz and classical to obtain the ideal balance in one piece, especially in this contemporary world.

How or what has your knowledge of jazz — particularly your freedom in improvisation — taught you about classical music performance?

I’ve always joking that if you have difficulty memorising classical music when performing, or struggle with the techniques, just think about the bright side: at least you don’t have to worry about what note to play. They already wrote down every note for you!

Indeed, that’s one thing I am grateful for when playing classical music. Because when you improvise jazz, you only have three minutes to compose the three-minute music, and you only have one chance. In classical music, you may have three hours, days, or weeks to compose the three-minute music. Knowing this difference hugely helped me interpret classical music, because you would understand why these notes were placed like this and where they would go. It’s like ‘behind the scenes’. As a result, I can feel and play them in a more reasonable way.

Let’s talk about this recording specifically. You’ve said in your notes: “Every composition is interpreted in the classical way but with a jazz heart in the ears because jazz taught me another side of beauty in classical music.” I’d like you to break down your favourite recording for us, and describe how this idea can be heard inside your performance.

One thing I love when playing classical music is its colour. The sonority brought by colours inspires our imagination.

In jazz music, this color is specifically controlled by the harmony, and jazz made me become more sensitive on the chords and their timbre. This could be heard especially in Dutilleux’s Piano Sonata, the first and second movements.

These two movements for me are like impressionism painting, because you can hear colours overlap on each other; sometimes bright, sometimes dark.

The third movement in many ways reminds me of the percussive feel and syncopations in jazz music. The similar colour inspiration could be also heard in Liszt and Scriabin.

How do all these ideas fit in with that term known as ‘historically informed performance practice’?

My piano professor in college is also a scholar specialised in the music of C.P.E. Bach, so she trained me pretty much with HIP especially when I play J.S. Bach, Mozart, and Beethoven. This approach is extremely beneficial to my performance, because it enabled me to obtain a better touch, articulation, and control of multiple voices. This can be heard in Bach and Beethoven in this recording, and also the first movements of both Dutilleux and Scriabin since their textures reflect Baroque linear multi-voice music.

I didn’t know how to play jazz when recording this album. But I listened to many jazz records, and that did affect the way I feel the time and phrase.

When I interpreted these compositions, I tried to make it natural enough, as if I am telling a story, which is same thing in jazz improvisation.

What advice would you give to classical musicians who are hesitant to open their mind to jazz interpretations, or perhaps feel unconfident about improvisation?

Be humble and open your mind to all kinds of possibilities, because jazz is the music played by ears. There will be a period when you feel tonnes of conflict, but please be patient. Listen to jazz music as much as you can, because that is the nutrition for learning improvisation.

Most importantly, never be afraid of starting too late. It’s never too late if you begin now, and your classical background will help a lot once you pass through the stage of conflict and struggle.

I hope everyone enjoys this album, and I can’t wait to see more cooperation between jazz and classical happen in the near future!

Listen to Francis Hon’s new album Dusk on bandcamp, and learn more about the pianist on his website.

If you like, you can shout Steph a coffee for volunteering her time for arts journalism during COVID. No amount too much or little 🙂