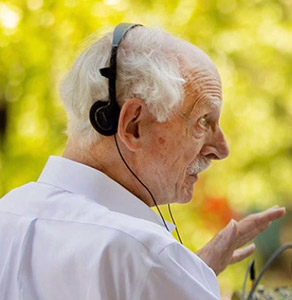 Sunday from 12 noon-10 pm, WHRB will pay tribute to David Elliott, who gave 58 years to the station and who started the July 4th Program of American Music in 2000 and curated it for 19 years. Hearing David again, in a 25-minute excerpt from his July 4th, 2004 broadcast, will provide an additional treat.

In building the playlist for his broadcasts, David placed an emphasis on accessible music and introduced many of us to lesser-known but very worthwhile American tonal composers such as Ernst Bacon, Nevett Bartow, Richard Rendleman, Burnet Tuthill, David Baker, Leslie Adams, and Don Gillis. The show will begin with some of David’s favorites by these and others.

David also appreciated  quirky and amusing pieces (such as the Homage aux Frères Marx by Henry Brant), which will be played throughout.

In addition, the broadcast will place David in a pantheon of American broadcasters via interesting American-music related segments from Mike Wallace, Hugh Downs, Charles Osgood, Edward R. Murrow, Walter Cronkite, and Martin Bookspan, all alongside David’s 1977 interview with Aaron Copland.

The closing section celebrates the American democratic system, reflecting David’s own deep patriotism, and will include perhaps his favorite work by an American classical composer, Don Gillis’s patriotic cantata This is Our America.

HERE is the complete program listing.

Mather Pfeiffenberger (Harvard 1979), very active during his undergraduate years as a classical music radio announcer/programmer with WHRB, was one of the many beneficiaries of David Elliott’s mentoring. Elliot bequeathed the show to this writer, who therein pays tribute to his mentor.